Transition Defence and the Pressbox King

Breaking down the Maple Leafs' goal against the Montreal Canadiens.

Share All sharing options for: Transition Defence and the Pressbox King 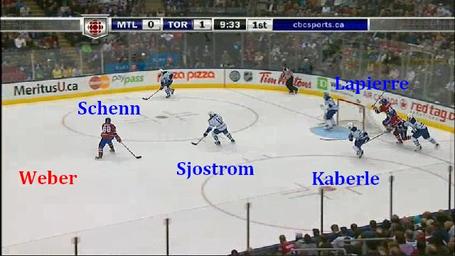 Here's a nice change of pace: breaking down a goal the Leafs scored. Before Habs fans come in here losing their minds, the title is just there to rile you guys up. Obviously this goal wasn't just P.K. Subban's fault. Sure, you'll see that he did a terrible job but he received a lot of help.

Above are some of the main players. The Habs have a man up high, in this case Yanick Weber, covering for Max Lapierre and Tom Pyatt who are caught deep on the play. Luke Schenn is breaking up ice with the puck alongside Fredrik Sjostrom and Tomas Kaberle. There's still a long way to go before the net. 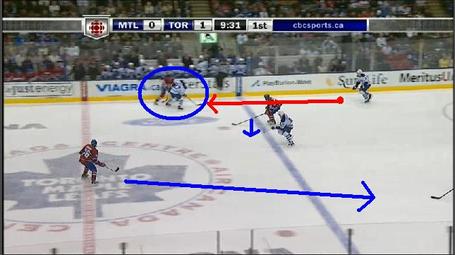 The play seems to be under control here. Schenn's pass to Tim Brent isn't the best play. Going cross ice to Tomas Kaberle likely would have been better. Weber seems to have Sjostrom covered and Brent is tied up. And playing deep is the Pressbox King who is ready to cover Kaberle when he jumps into the play. 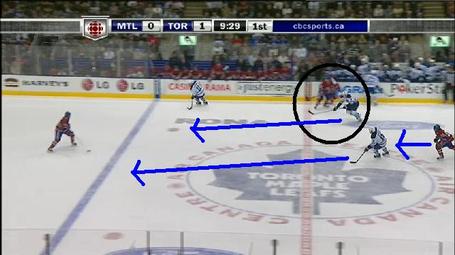 Weber ran over to hit Brent who made a nice deflected pass to Sjostrom, Schenn kept skating and he along with Kaberle created a 3-on-1. Tom Pyatt is frantically trying to make up for Weber's mistake. 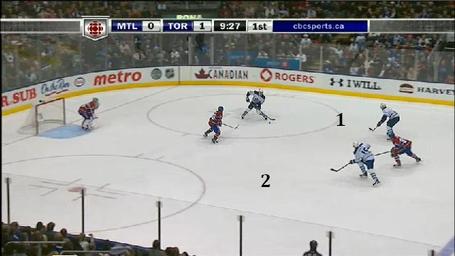 Sjostrom's got options here especially because Pyatt is back-checking without a purpose. Subban actually hasn't done a bad job of keeping Sjostrom from getting to the net but he's about to have the play get away from him. Since Pyatt's not picking anyone up he can't let a pass get through. And of course... 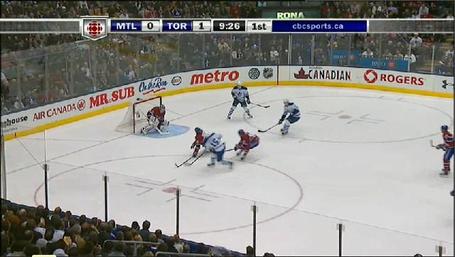 It does get through leaving Subban and Pyatt to try desperate last-ditch stick checks. I wonder if they work... 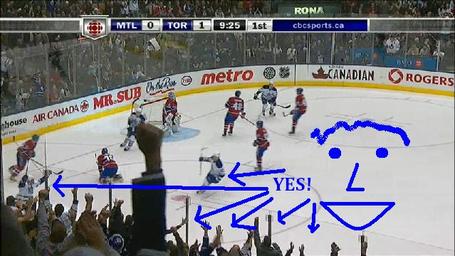