Jonas Siegel has a great blog post up today listing 10 games this season where the Leafs gave up a cluster of goals in a very short time. For those of you scoring at home, that means the Leafs have been torched for multiple goals in three minutes or less in 30% of their games this season.

I wanted to take Jonas' nice research one step further and add a goaltending column to see if there was any sort of pattern...

And indeed there is: J.S. Giguere has been in goal for 7 of the 10 games where the Leafs were torched.

To my mind, this pattern of clustered goals against, coupled with a longitudinal look at Giguere's save percentage (nicely assembled by our own SkinnyFish) is yet further evidence of Giguere's ongoing decline. 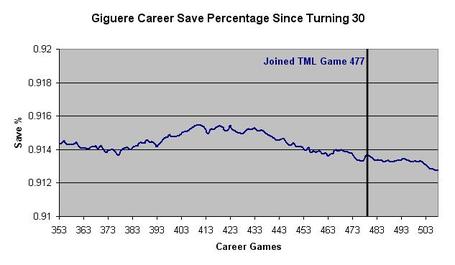 Looking at his play of late, I hope Gustavsson gets the bulk of starts going forward and that Burke and the MLSE brain trust are working out what their goaltending options are for next year.