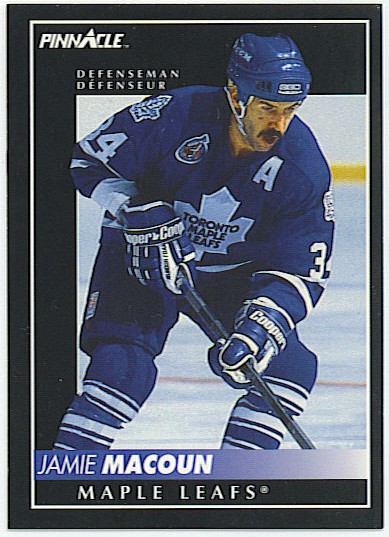 Somewhat flu-ridden today, so I apologize in advance for any lack of coherence.

I wanted to start out with a little anecdote from last week.

I was watching the LA game with my five-year-old son.  It was the last minute of the game.  Hagman had scored a moment or so earlier, but Kessel got stuffed along the right-wing boards, Kaberle went off looking for a feed that wasn't coming and LA piddled around with the puck for a while before scoring the empty-netter and sending another game down the tubes.

Saying nothing, I put the TV onto Treehouse to keep the baby occupied while I finished up the last of the dishes.  My son went over to the table to work on some word search puzzles.

After a minute or so, he comes over and says, "Dad, when is Bobby Orr coming back?"

I had to explain that Bobby's knees were so badly hurt playing hockey that he had to stop altogether, and that those games he and I watch sometimes were actually played a very, very long time ago.

I did, too, actually, because he captured in that question the very feeling I had in watching the Leafs of late - where was the help going to come from?

Well, maybe we found out.

I first heard the news of the Gilmour trade in the car, and the prime memory was that we all started laughing.  I heard yesterday's news in the car as well, and it was the exact same effect.  I admit that I was laughing a lot harder when the Giguere deal was reported as including Anaheim's first-rounder as well, but I was laughing all the same.  I don't see this as a season-saver, but it could be an interesting set-up for next year.  That's how the Gilmour deal worked, as well.

In the Ric Nattress LotD post, I talked about how impactful it was for us to get a complete defensive pairing off the Flames, and how impressive it was to see the calm and serenity of the Leaf end when they were out there.  Nattress moved on pretty quickly, but Macoun stuck around for a while (and his impact is still being felt - here's a trivia question: What active Leaf is here as a result of the Jamie Macoun trade?).

Jamie had been a pretty solid scorer in Calgary and might have trended even higher in that direction if he hadn't lost a season to a car accident and the resultant nerve damage in his arm.  In Toronto, he did put up one 30-point season, but his main influence was as a rock-solid defensive presence.

He was a big part of the best defensive unit I've ever seen in Toronto and while Gilmour gets well-deserved accolades for what he did up front, Jamie's understated work on the back end was a pretty big deal as well.  You simply didn't worry about anything dumb happening when Jamie Macoun was on the ice.

The biggest difference with Macoun (as opposed to this deal with Phaneuf) is that Jamie was already 30 when the Leafs got him.  By the time he was 34-35, he was slowing down quite noticeably.  His offense drifted toward near-zero (he only scored one goal in his last three seasons here combined) and he started to become more vulnerable to guys with speed.  The Leafs were going absolutely nowhere, fans were in a lousy mood and Jamie started to become a bit of a target.  Still, Detroit found room for him (Detroit always does) and sent us a fourth-rounder in 1998.

Jamie didn't mind being a Wing as he got a Stanley Cup out of the deal.  Toronto, with that pick, got a kid by the name of Alexei Ponikarovsky (so no, they don't all have to to be first-rounders...). 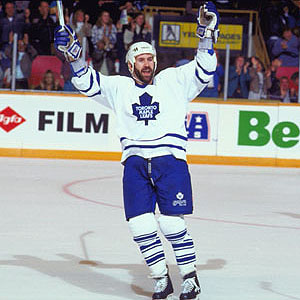 Jamie likes it in Toronto - via www.legendsofhockey.net


the HHOF take on Jamie:

"Defenseman Jamie Macoun spent parts of 17 seasons in the NHL with three different clubs. He was a hard-nosed stay-at-home defenceman who knew every trick in the book and could pass the puck ahead to his forwards fairly well.

Born in Newmarket, Ontario Macoun played junior B in his hometown and in nearby Aurora. He then spent nearly three years at Ohio State and was signed as a free agent by the Calgary Flames in January, 1983. He got his feet wet in a few late season and playoff games that year before enjoying a solid debut in 1983-84. That year Macoun notched 32 points and earned a place on the HL All-Rookie team

The steady rearguard became a fixture on the Flames as they excelled in the regular season but constantly ran into the unstoppable Edmonton Oilers in the playoffs. In 1986, they finally vanquished their rivals and reached the finals where they lost to the Montreal Canadiens. In May, 1987, Macoun was involved in an automobile accident that resulted in severe nerve damage to his arm. He was forced to sit out the entire 1987-88 season but returned the next year to help the Flames win their first Stanley Cup.

Midway through the 1991-92 season, Macoun took on a new challenge when he was part of a ten-player deal with the Toronto Maple Leafs that was built around Doug Gilmour and Gary Leeman. The hard-nosed veteran became a valuable team leader and eventually played some of his best hockey under coach Pat Burns' close-checking system. Macoun helped the Maple Leafs reach the semifinals in 1993 and 1994 and remained with the club into the latter stages of the 1997-98 schedule. At that point Toronto began to rebuild and sent the wily veteran to the Detroit Red Wings where he was a role player on his second Stanley Cup team. Macoun retired after playing 69 games for the Wings in 1998-99, bringing his career total to 1,128 regular season appearances." 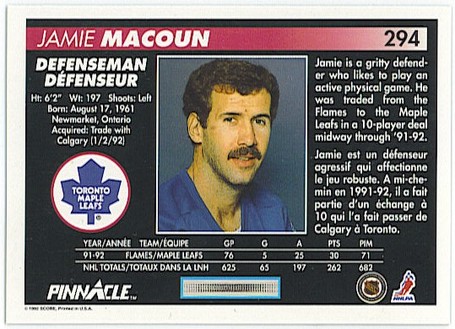