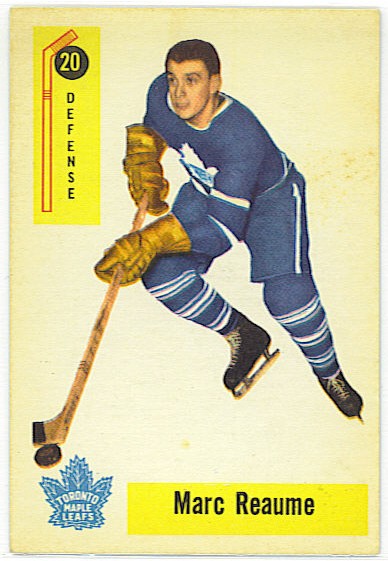 I don't know how many people will take note of the anniversary today, but it's actually a pretty significant date in Leaf history.  I've had this one circled on the calendar for some time.

Marc was one of the young defensemen to come up to the Leafs from their farm system in the mid/late 1950s.  He joined a team in transition that was also introducing the likes of Bob Baun and Carl Brewer to the blue line.  He became a regular in 1955-56, only one year removed from junior.  In his second full season, his six goals tied Tim Horton for the team lead amongst defensemen and his 20 points were second only to Horton's 25.

Marc was a pretty talented guy, but never really seemed to put it all together after that 1956 season.  He was inconsistent, as are many defensemen who are basically learning the position in the NHL.  The fact that the Leafs weren't terribly strong didn't help.  As Baun and Brewer began to assert themselves and when Allan Stanley joined the Leafs in 1958 to play alongside Tim Horton, there wasn't a ton of ice time left and it shows in the kinds of numbers Marc put on the board.

Marc had a fan in Detroit's Jack Adams, though.  A former Red Wing named Johnny Wilson, now a Leaf, told Punch Imlach that Adams had always liked Reaume's game and that he might like to add him to the Detroit roster.

On Feb 10, 1960, Imlach swung a deal, sending Reaume to the Red Wings in exchange for an aging malcontent who'd walked away from hockey rather than accept a trade to the Rangers.

His name was Red Kelly.  (No, he wasn't really a malcontent.  It just sounds more dramatic.)

Marc didn't have a ton of luck as a Red Wing.  He was injured and only played 9 more games that season.  By the middle of 1960-61 he was in the minors, basically to stay.  He was actually an excellent minor league defenseman, making the all-star team a number of times and twice winning the outstanding defenseman award.  Part of the problem, though, is that once you hit a certain age, if you were pegged as a non-NHL defenseman, you were pretty much stuck.

He was reacquired by the Leafs in 1964 and spent a few years in their system, playing alongside Don Cherry.  If there was one position where the 60s Leafs were notably deep, though, it was on the blue line.  There were no callups.

He did get a last NHL fling at age 37 with the expansion Canucks in 1970-71.  An mid-season car accident ended his playing days.

Red Kelly - well, we'll talk about him later.  He did OK. 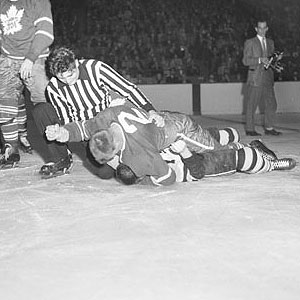 Mark makes a friend - via www.legendsofhockey.net 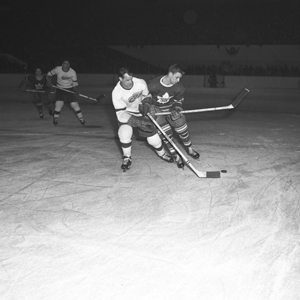 Marc tangles with Gordie Howe - via www.legendsofhockey.net
Good thing they fought in the old days, too.  Marc is #2


The HHOF take on Marc:

"Although born in Quebec, Marc Reaume wandered over the Ontario border to play four seasons with the St. Mike's Majors of the OHA from 1950 to 1954. With his NHL rights owned by Toronto, he stuck his toe into Maple Leafs waters for five games before heading to Pittsburgh of the AHL to iron out his game.

Eventually, as the Leafs entered a rebuilding phase, Reaume found a role for himself as a stay-at-home journeyman defender for parts of six seasons at the Gardens. But when Red Kelly hit the trading block with Reaume as the asking price, it was impossible for the Leafs to refuse such a Red Wings godsend.

In the Motor City, Reaume was plagued with injuries that undermined his relationship with the club. After only 49 games as a Wings defenceman, he was dispatched to the AHL where he settled in for the long haul as a league standout.

In 1963, while with the Hershey Bears, he was voted a First-Team All-Star and won the Eddie Shore Award as the AHL's top defender. As he reflected on his professional experiences, Reaume noted that he considered himself to be a class A minor-league player but only a fringe skater at the NHL level where he felt he lacked confidence in himself.

Nonetheless, over the years he won the odd return to NHL life, joining the Canadiens for three games in 1964 and the Canucks for 27 in 1970-71. Otherwise, his home was with the Tulsa Oilers, Vancouver Canucks of the WHL, and the Rochester Americans of the AHL.

Reaume's lengthy career came to an abrupt end, however, shortly after making his transition from the Canucks to Rochester. For reasons unknown, his car left the road and hit a tree while en route to join the Americans for a game. His injuries were life threatening and forced his immediate retirement from hockey." 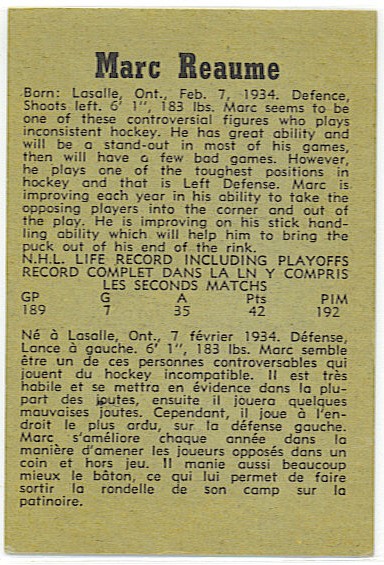