So DID Marc Crawford's son break the Lehtonen trade?

Share All sharing options for: So DID Marc Crawford's son break the Lehtonen trade?

Last night, after the Kari Lehtonen deal had been announced Down Goes Brown noticed something interesting about how the story had broken:

[T]wo interesting observations about the account, other than the fact that it had the exact trade hours before anyone else:

Now, this doesn't necessarily add up to Crawford's son leaking the trade. After all, I've heard people can sometimes pretend to be someone they're not on twitter. Crazy, but true.

Since DGB wrote that last night Bob McKenzine noted the tidbit in his latest piece for TSN as well as pointed out that the second tweet from that account gave him cause to wonder whether Pierre Gauthier was being sincere in his proclamations that he had no immediate plans to trade either goalie:

But, and you had to know there was a but coming, I do wonder a little bit. I now wonder because there was a fellow on Twitter who yesterday correctly predicted the Kari Lehtonen trade to Dallas, right down to Ivan Vishnevskiy and a fourth-round pick going back to Atlanta. Five hours before it actually happened. Five hours!

Now, that same fellow is reporting Stars' veteran goalie Marty Turco is on the block (that's a given), but that the Chicago Blackhawks and Montreal Canadiens have made inquiries.

It's interesting to see the weight that Bob McKenzie gives this rumour considering the fact that before he posted that article his latest comment had been that it was nonsensical to think Montreal was trading a goalie. Considering how quickly and vehemently McKenzie went after Falconer's tweet last week that he had heard rumblings, from a team source he trusted, that a deal for Ilya Kovalchuk was close to being done with Los Angeles I wonder if maybe he knows something about the person behind the account. More likely that perfect track record was enough to at least place the seed of doubt in his mind. 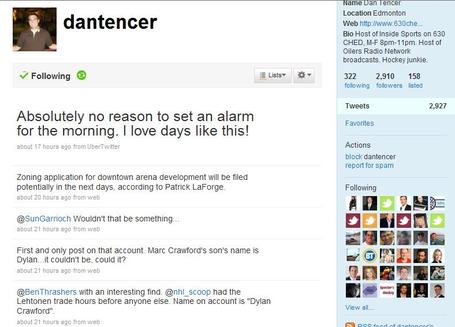 The other is that HFBoards picked up on the coincidence this morning and while they are pretty skeptical about the connection one commenter did note that there were two additional tweets made since the deal went through:

Why does it matter that they captured the third tweet from that account? Well, turns out that the Bruce "Malkin to the Kings" Garrioch twitter feed isn't the only one that's been scrubbed clean:

Now, as DGB pointed out, there isn't anything necessarily wrong with what happened. If it really is Marc's son he probably had a word with him about not sharing their father-son talks with Twitter. I contacted Brandon Worley of SBN's Defending Big D to see if he could get a comment from the Dallas Stars' PR office about whether it was Dylan or not and after waiting a while he hasn't heard back from them yet. If we hear from them we'll update you but in the meantime it just looks like an embarrassing situation for the club.