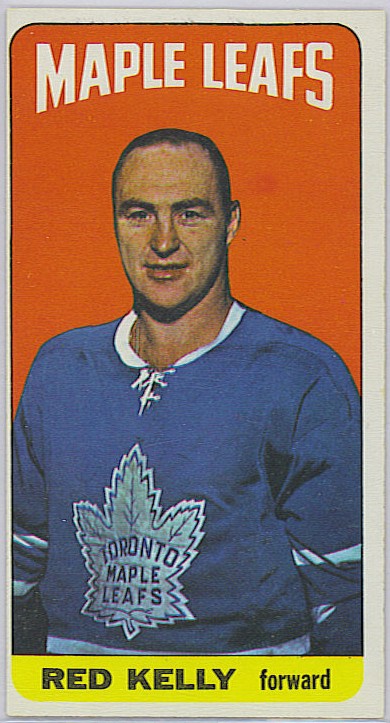 The deal that brought Kelly to Toronto was more of a shocker than it should have been.

The backstory on it was that Red had had an ankle injury early in the season that was affecting his play.  By the new year, his numbers weren't where Jack Adams thought they should be and Jack decided his stud defenseman was slowing down.  This led to the surprise deal with the Rangers.  When Kelly balked at going, Clarence Campbell threatened him with being blacklisted from hockey.  Red didn't back down at all.  He told Campbell he'd had a great career and was happy to move on.  He even went so far as to take a private sector job.

Then came the meeting with Punch.

Imlach met Red in a Toronto restaurant and asked him whether he'd be interested in coming to Toronto (he had permission, tell Mike Gillis that this wasn't tampering).  A Toronto beat reporter happened to be in the restaurant at the time and either didn't see them or didn't clue in to the significance of the meeting.  At any rate, he missed out on quite a story.  Shortly thereafter, Red became a Leaf.

The fascinating aspect of this has always been how Red was deployed in Toronto.  Red was the inaugural winner of the Norris and had been a first-team all-star defender as recently as 1957.  Red related the conversation this way:

"When I had the contract talk with Imlach, we talked most of the day and then it went until midnight before we agreed. Nothing was ever said about where I was going to play or anything until after I agreed to come to Toronto. Toronto was playing Montreal the next night. They had to fly my skates in from Detroit for that game. After I signed, I told Punch, 'I've been off skates for ten days or so. I'd hate to make a mistake out there and cause a goal,' and Punch said, 'Red, how would you feel about playing centre?' I said, 'Great! No problem.' I didn't care where I played as long as I was playing hockey. He said, 'If we're going to win the Stanley Cup, we're going to have to go through Montreal. I need somebody to check Beliveau.' He said, 'How would you feel if I started you against Beliveau?' I just said, 'Fine. Great. Love it!'"

(Quote is from here - read the rest of the piece, it's great)

What was remarkable about his transition to centre wasn't just the defensive ability he brought, it was the offense, too.  Red's 70 points placed him 6th overall in NHL scoring and his 50 assists were good enough for second.  Frank Mahovlich, playing on his wing, exploded for 48 goals and 84 points after scoring just 18 goals and 39 points the year prior.

Red continued with good offensive production through '62-63 and then it began to tail off a bit.  He kept up the solid two-way play through '66-67 when he finally retired at age 39.  In his last game, he made the pass that sprung Ron Ellis for the Leafs' first goal, then got the puck to George Armstrong for the empty-netter that clinched the Cup.  Pretty solid way to go out.

It's interesting to watch players like Red in those games now that they're available.  In Game 6, what seems to really define his play is smarts and positioning.  Red, at 39, doesn't have the foot speed to run and gun, so he makes up for it by basically never being out of position.  There's this economy of movement to his game.  He goes simply to where he should be and the play comes to him.  Experience, I guess.

In all, Red was on eight Stanley Cup champions - four in Detroit, four in Toronto. 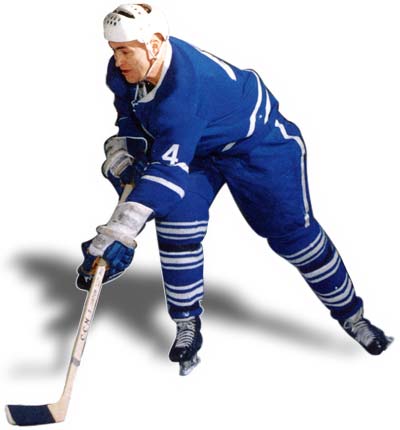 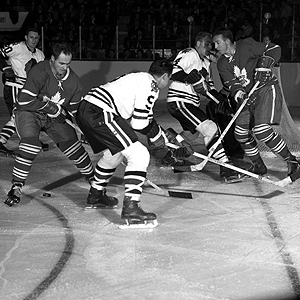 Red and Bob Nevin take on Chicago - via www.legendsofhockey.net
Red gets the last point of his career - an assist:

- Traded to NY Rangers by Detroit with Billy McNeill for Bill Gadsby and Eddie Shack, February 5, 1960.
- Kelly and McNeill refused to report and transaction was cancelled, February 7, 1960.
- Traded to Toronto by Detroit for Marc Reaume, February 10, 1960.
- Rights traded to Los Angeles by Toronto for Ken Block, June 8, 1967.


The HHOF take on Red:

"Red Kelly was a unique player - versatile and talented enough to be one of the National Hockey League's best-ever defensemen early in his career and a high-scoring center at the end. The red-haired gentleman was cool and calculating on the ice and never swore, but there was no doubt about his ability to take care of himself. He had been a championship boxer at Toronto's St. Michael's College, skills the four-time winner of the Lady Byng Trophy wouldn't often display during his 20-year NHL career.

Born in Simcoe, Ontario, in 1927, Kelly was 20 years old when the Detroit Red Wings brought him up to the big league directly from St. Michael's. A solid but mobile and skilled defenseman, he quickly found a home on the team playing with such superstars as Gordie Howe, Ted Lindsay and Sid Abel. Kelly was an effective checker, at home on the blue line or on the left wing, where he was sometimes used due either to injuries or to add a little muscle on the offense.

Kelly earned enough All-Star votes in 1950 to win a spot on the NHL's Second Team and the chance to play in the All-Star Game. The Red Wings, well on their way to being the league's dominant team, won the Stanley Cup that year, as they would in three of the next five seasons. And Kelly was an integral part of Detroit's winning formula. His puck-carrying ability allowed the Wings to move from their own zone quickly and provided them with a quick transition game.

Kelly was an All-Star for eight consecutive seasons with the Red Wings, six times on the First Team, and won the Lady Byng Trophy three times. In 1954 he was chosen as the first recipient of the James Norris Memorial Trophy as the outstanding defenseman in the league. In 1956 he was named team captain, a job he held until the end of 1957-58 season.

In 1960 the relationship between Kelly and Detroit management began to sour when complaints about his play became public. Kelly had been playing with a broken bone in his foot, a fact only the top executives of the club knew. The Wings announced a trade, sending Kelly to the New York Rangers for Eddie Shack on February 4, 1960. Kelly, upset with his treatment, refused to report to New York and announced his retirement the next day. Toronto coach Punch Imlach attempted to talk him out of it and managed to acquire his rights from Detroit for Marc Reaume. NHL President Clarence Campbell gave Kelly a week to rescind his retirement. Red had been a Toronto fan all his life but soured on the team after a few visits to Maple Leaf Gardens as a junior player. He didn't like the building and was further put off when his team lost some important games there.

His alienation was a throwback to his early playing days, when a Toronto scout proclaimed that Red would never play more than 20 games in the NHL and went so far as to bet a hat on his prognostication. Despite all this, Kelly decided to take Imlach up on his offer and join the Maple Leafs, though not as a defenseman. Imlach moved him up to the center position and, days after retiring, he began what could be called a second career as a successful full-time forward. Any of Kelly's bad memories were quickly forgotten when the Toronto fans gave him a rousing welcome in his first game with the Leafs.

Frank Mahovlich played on the left wing in Kelly's first full season with the Leafs and set a team record with 48 goals, many of them due to the veteran's playmaking skills. In addition to his talent, Kelly brought his winning ways to the Leafs. In his eight years with the team, Toronto won the Stanley Cup four times. He won even when he entered the world of politics in 1962. He was elected to the Canadian Parliament, where he served for three years until retiring in 1965 to concentrate on hockey again. In 1967, after winning his last Stanley Cup - and the Maple Leafs' last championship as well - Kelly was traded to the expansion Los Angeles Kings, where he was named head coach. As a coach, he proved to be a winner yet again, guiding the Kings into two consecutive playoffs. After a three-year stint with the Pittsburgh Penguins, he returned to Toronto and took the Leafs to four straight quarterfinal appearances." 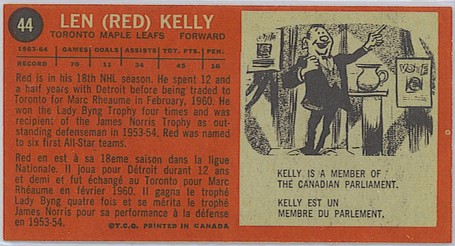 (Note - I had been intending all year to use Red's first-ever Leaf card here to commemorate the trade.  Apparently I never go around to actually scanning it....)