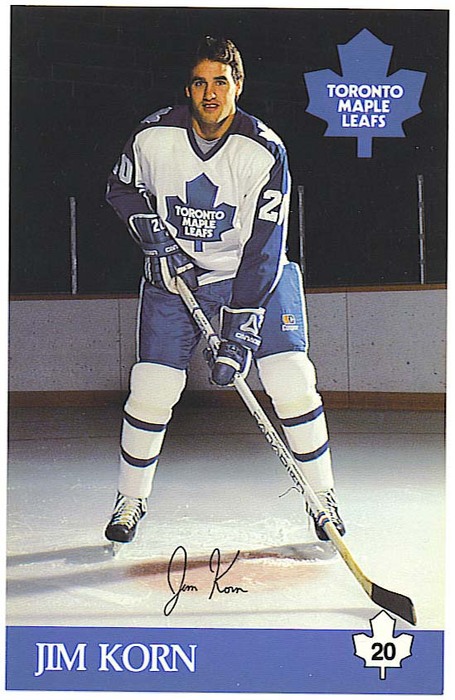 I've been struggling with the Jim Korn LotD for a while.

For most players I've seen, I've got a mental image stored somewhere of a particular thing they did, something that helps me give a sense of what they meant to me as a fan.  For Jim, I really don't have one.  There isn't a particular fight, or a particular goal, or something that happened off-ice, or anything.  I just have this sense of him being a big guy that took a lot of penalties - a guy who played a rough game but wasn't really a fighter in the sense that, say, Bob McGill was (I was going to say Wendel, but NOBODY was a fighter like Wendel was....).

I'm struggling a little bit to even come up with a modern comparable.  To an extent, he's sort of like a glowering version of Wade Belak, as he was a tough guy who would play forward or d when the situation merited it, though he had better offensive numbers and wasn't the same calibre of fighter.  He wasn't the kind of personality Wade was, either.

(Edit - a more-offensive Chris McAllister, maybe?  That one could work....)

Jim came to Toronto from Detroit in 1982 in exchange for a pair of picks that Detroit would spend on two more fighters - Craig Coxe and Joe Kocur.  I can only imagine that Toronto looked at his size and temperment and felt they had someone who could grow into the kind of enforcer they'd really lacked since Tiger left.

What they got was a guy with some undeniable ability who would fight on occasion but never really became that looming presence either at forward or defense.  He was sort of a second option as a fighter - big enough to fight in the heavyweight division, but not a "heavyweight" in the sense of being one of the top enforcers out there.

1984-85 was his last year with the team - at least in terms of playing any games.  In the 1985-86 pre-season, he blew out a knee and missed the entire year.  Just prior to 1986-87, he went to Buffalo in a three-way with Calgary.  The Leafs got Terry Johnson, who replaced the muscle on defense, but really didn't play a whole lot. 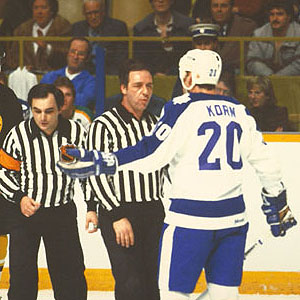 Jim making a case for something.  Probably didn't win - via www.legendsofhockey.net
This is sort of typical of what you find out there - Jim is big and game, but not a pure fighter:


The HHOF take on Jim:

"A huge 6'4" defenceman who was moved up to forward occasionally in his career, Jim Korn played nearly 600 NHL games for five teams. He showed flashes of talent but his attitude was always a concern and constantly alienated him from his teammates.

Born in Hopkins, Minnesota, Korn played three years at Providence College where he was an ECAC second team all-star in 1979. He was chosen 73rd overall by the Detroit Red Wings in 1977 and played for Team USA when they finished seventh at the 1979 World Championships.

Korn played nearly three years with the Red Wings beginning in 1979-80 but his game never reached the level the organization anticipated. He played for the U.S. at the 1981 World Championships and was traded to the Toronto Maple Leafs for draft picks in March 1982. Korn spent over three years on defence but moved up to forward where he scored 12 goals in 1983-84.

Korn was injured all of 1985-86 then traded to Calgary by Toronto on eve of the 1986-87 season for Terry Johnson. The Flames immediately sent him to Buffalo for veteran blueliner Brian Engblom. Korn played a year in Buffalo before being traded to the New Jersey Devils for Jan Ludwig. He played two and a half seasons in the Meadowlands before he was re-acquired by Calgary where he played nine games before retiring after the 1989-90 season." 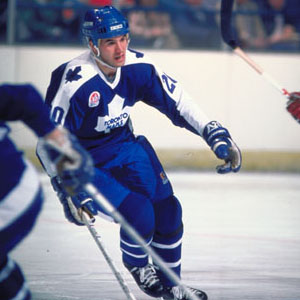