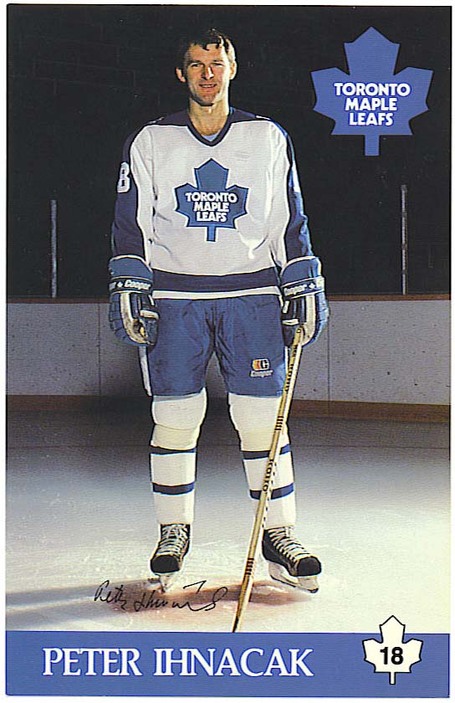 The things you think you know....

Much like Bill Stewart, Peter Ihnacak was a name I was looking forward to.  You see, way back in 1983-84, I took a creepy little instamatic camera to the Gardens and took a bunch of pictures of my first-ever game.  In it, there's a celebration as Peter Ihnacak scores the only Leaf tally.  The pictures are dim and grainy, but you can see the red light and make out Salming and Nylund and a couple of other guys.  I've then got a shot of the old scoreboard announcing that this was Peter Ihnacak's goal - his 15th of the season.  (I will scan those once I find them.)

I've long maintained that Peter Ihnacak got the first Leaf goal I ever saw live.

There's only one problem, and it struck me yesterday as I was prepping to do this - Peter Ihnacak only scored 10 goals in 1983-84.  He was injured.

So after nigh-on 25 years of thinking those pictures were of one thing, I now realize that those were from my SECOND game, and that 4-1 loss to Washington was actually a Feb. 5, 1985 game.  The nice thing is that I got this postcard of Ihnacak the day he got that goal.  The bad news is that I have no idea when that first game was, who it was against or who scored my first Leaf goal (I'm thinking a 3-1 loss to the Caps on Dec. 17, 1983, which is how I conflated the two games - all I know was that Hutchison and McCourt were in the warmup, and Hutch was a recent signing).

All the same, Peter was one of my favourite players in the mid-80s.

The second-rounder was Peter Ihnacak, a 25-year-old defector from Czechoslovakia.  He'd come over after the 1982 World Championships and the NHL ruled he'd have to go through the draft rather than signing where he wanted as Peter Stastny had.

The Leafs got him 25th overall and in the early going he really looked like a dandy - maybe a valid return for a great player like Sittler.  He centred a line with Mirko Frycer and another rookie in Walt Poddubny.  Both Peter and Walt hit for 28 goals, which was a Leaf rookie record at the time.  His 66 points are still a Leaf rookie record.  (Borschevsky was too old to count as a rookie in his first season.)  With Frycer's talent as well, that line was a source of some pretty solid hope.

Injuries did them all in, though.  Frycer and Poddubny have both been dealt with already.  Ihnacak had a knee injury in early 1984 and missed half the season.  There were further minor ones in 1985 and 1986 and he'd never hit for those kinds of offensive totals again.

The Leafs would add depth at centre - either through drafts (Courtnall, Damphousse) or trade (Fergus, Olczyk) and Peter's playing time got cut back.  By 1988-89, he was spending more time in Newmarket than with the big club.

I always thought it was a shame, because he always struck me as a smart player who'd make things happen when given the chance.  He also wasn't the defensive liability that a lot of the others were.  Age (in the 80s, you were pretty old at 32) and injuries played against him, though, and his last five games came during a 1989-90 callup. After that, it was on to Europe, where he'd play until age 40.

In a testament to the amount of churn that goes on with the Leafs, Peter Ihnacak is the last Leaf "lifer" to have a career of at least 400 NHL games.  (Poni and Kaberle have crossed that threshold, but I wouldn't bet on either finishing as Leafs.)  To get a lifer with a 500-game career, you have to go back to Ron Ellis.

Oh - and yes, Peter is Miro's brother.  We won't talk about that little bit of history... 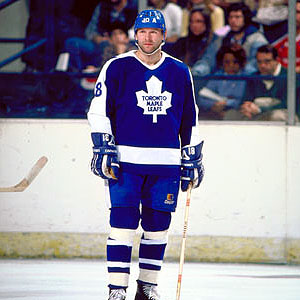 This is the shot on Peter's only OPC card - via www.legendsofhockey.net
One of the key moments of this 1987 playoff game is Peter closing his hand on the puck, getting away with it and then finding Clark in the slot.  Watch Harry Neale count the amount of time he had it, not realizing that he's watching a slow-motion replay:


the HHOF take on Peter:

"Centre Peter Ihnacak was a crafty playmaker and solid checker who played parts of eight years with the Toronto Maple Leafs in the 80s and 90s. He also played several years in Czechoslovakia, Switzerland and Germany in a pro career that lasted nearly two decades. During the mid point of his NHL career he had the opportunity to play with his younger brother Miroslav.

Born in Poprad, Czechoslovakia, Ihnacak first gained attention by helping his country win the bronze medal at the 1977 World Junior Championships. He then spent five years in the Czechoslovakian league with Dukla Jihlava and Sparta Praha. After contributing to his country's silver medal win at the 1982 World Championships, Ihnacak was drafted 25th overall at the NHL Entry Draft. This selection was also significant in that it was an extra draft pick set to the Leafs by Philadelphia as part of the package for star centre Darryl Sittler.

As a rookie, the young forward formed a solid line with Miroslav Frycer and fellow freshman Walt Poddubny. In fact, both Ihnacak and Poddubny set franchise records by scoring 28 goals in their first seasons. The next year the hard-working centre was limited to 47 games due to injury. He then scored 22 goals in 184-85 and was one of the few bright spots when Toronto finished with the lowest point total in the league.

Ihnacak was a key checker and playmaker when Toronto came within a game of reaching the semifinals in 1986 and 1987. By the late 80s he began spending parts of the season in the AHL since the Leafs had more depth at centre with the likes of Vince Damphousse, Tom Fergus and Ed Olczyk. After registering 73 points in 72 games for the Newmarket Saints in 1989-90, Ihnacak signed with the Freiburg club of Germany. Over the next few years he provided scoring and veteran savvy on the Kloten and Ajoie teams in Switzerland and Germany's Krefelder before retiring in 1996." 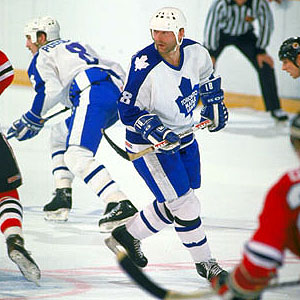 Peter and Walt Poddubny - via www.legendsofhockey.net