I'd like to introduce you to Martin Brodeur. Three time Stanley Cup Champion, four time Vezina winner, Olympic Gold Medalist and Canadian National hero. Surely, the performance of a player of such magnitude could not possibly come into question, let alone be the reason for our defeat in a long-awaited matchup of incredible importance... 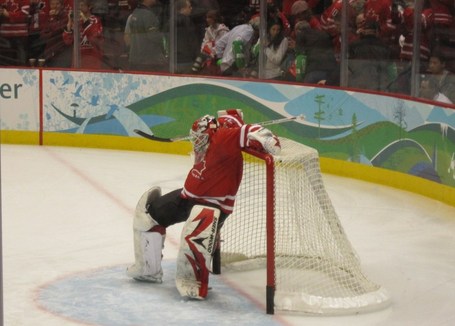 So I sprung for tickets to USA vs. Canada on Sunday. Now, I don't want to play the sore loser who blames the refs, but holy crap, can a brotha get a call? We get a goalie interference call in the second period and instead of going down 3-2 we get a powerplay with a chance to take the lead. Forget about the bad goals Marty allowed, that missed call was. the. game.

Tons of pics after the break... 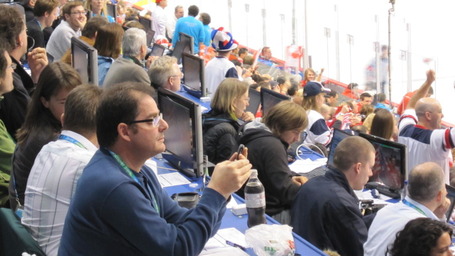 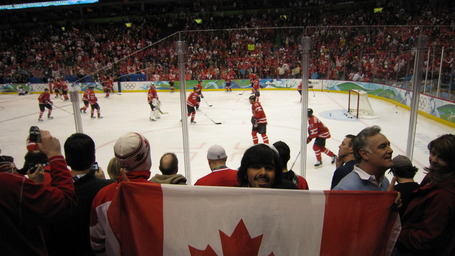 Funny story about these first two pics. The first pic was a cropped section of a bigger pic I took - the second one is my friend Farzan standing infront of Team Canada during warmups. It was only when I got home that I realized that TSN's Steve Simmons is in the media area in the first pic, and miracle on ice goalie Jim Craig is standing behind my friend in the second pic. I guess I was so jacked up for the game that I had tunnel vision, atleast as far as spotting celebrities goes. Paul Kelly was also in my section, but I didn't feel like waiting in line during the intermission to get my picture taken with him. 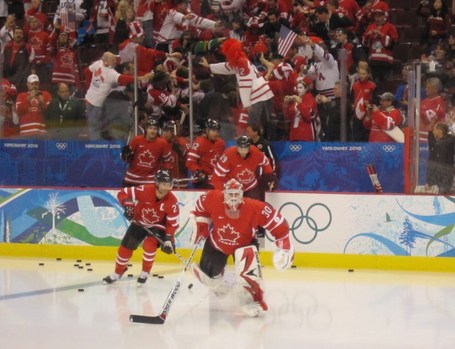 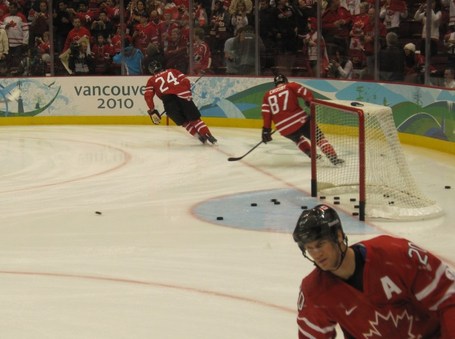 Why can't our old players, like Pronger and Neidermayer, be as epic as Jaromir Jagr? 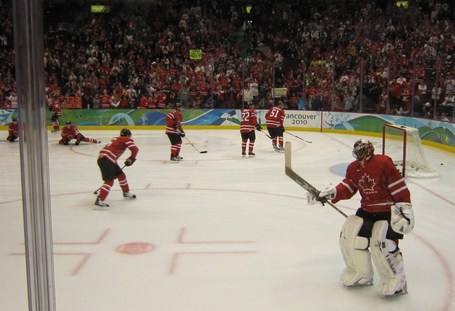 Roberto Luongo, your starter for Tuesdays game vs. Ze Germans. 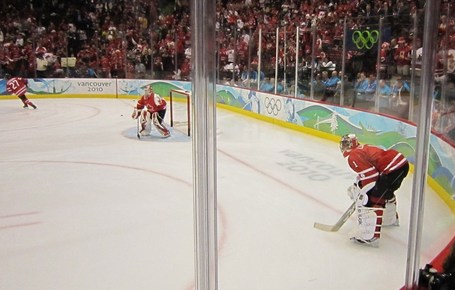 With Luongo size you gotta' believe he would have stopped that second USA goal. And he wouldn't have baseball slapped that puck either. (He definitely would have flopped around in pain to draw a goalie interference call on the third USA goal, as well, being a notorious diver) 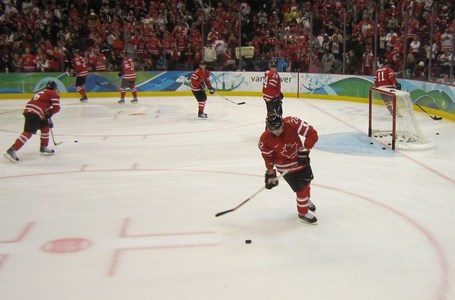 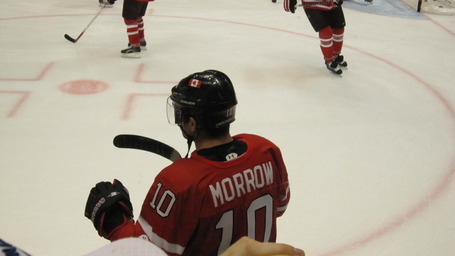 HEATER. I love that I can cheer for this guy again. 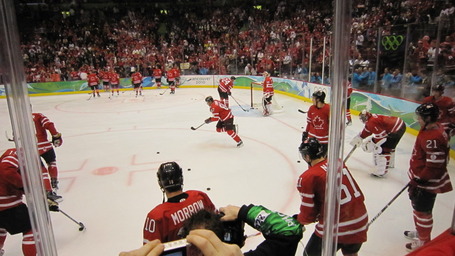 Crosby breaks up ice during the warmups. 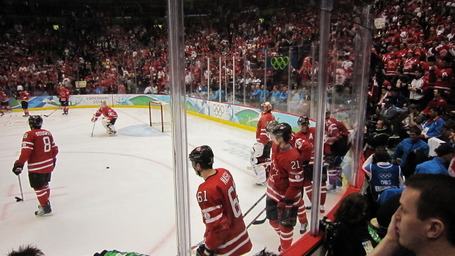 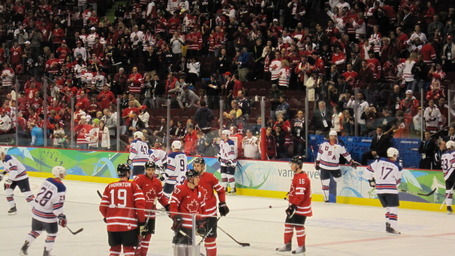 Joe Thornton. Not the most effective player on Sunday. One could say. 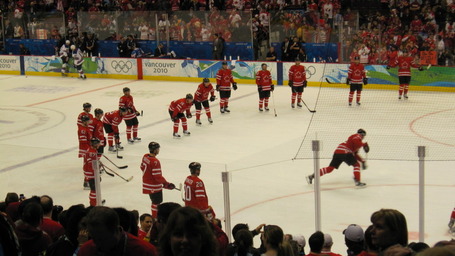 Team Canada doing a drill where one guy shoots and everyone stands still on the perimeter.

I was interviewed by a Reporter from the AP during the second intermission. I'm C.J. Volney. I think I gave her a better answer than "This is our game! Hur-hur." She totally didn't believe me that I would be happy with Canada simply medalling at these games - opposed to Gold and only Gold - but I'm serious, after spending a week watching the calibre of talent on the ice in Vancouver, there are so many teams that could be on the podium that, yes, I would be happy with a top 3 finish for Canada. I wouldnt be ecstatic, but I would be happy. 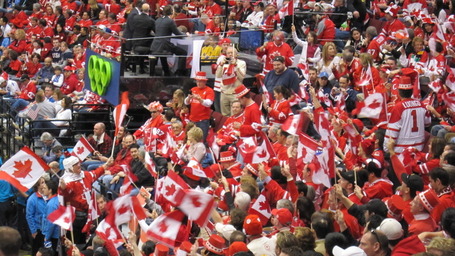 The best part about the game was the crowd. It was rockin' and when Canada scored the place went absolutely bonkers. Here we have the famous "flashing-light-helmet-flag-waving-Canada-fan" guy who was also at the World Juniors this year. As I was leaving the arena I stopped to chat with him and he kept yelling "IT AINT OVER! WERE STILL IN THIS!" 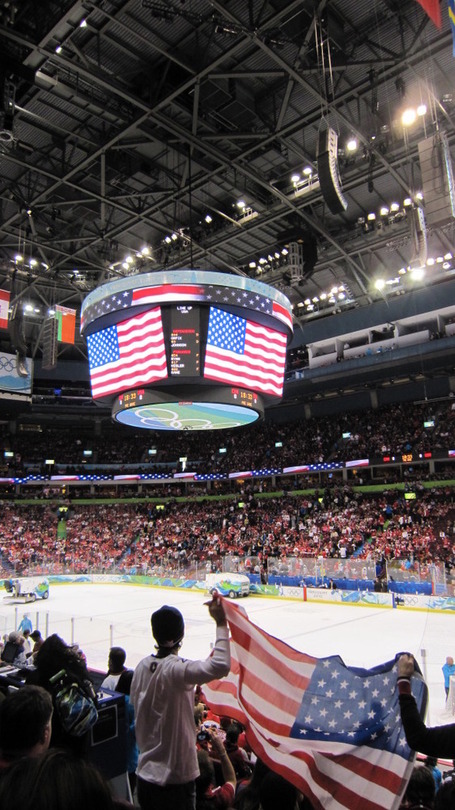 But in the end, USA was the better, or atleast the more oportunistic team. Ryan Miller needs to stop slaying my favourite teams. I fully expect him to run out onto the field at a Jays game someday and smash Aaron Hill's leg with a crowbar. 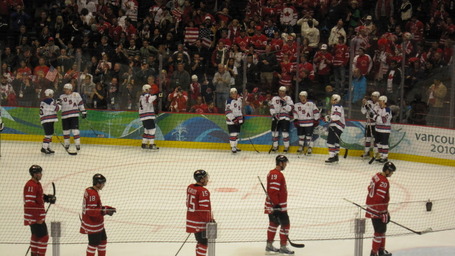 But we live to fight another day. We play Germany on Tuesday - you know what that means?