Required Reading for the Leaf Fan - Deceptions and Doublecross: How the NHL Conquered Hockey

Share All sharing options for: Required Reading for the Leaf Fan - Deceptions and Doublecross: How the NHL Conquered Hockey 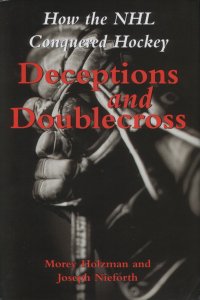 When the time comes to teach a university course on Toronto hockey, Deceptions and Doublecross will be one of the first things on the required reading list.

Anyone who followed the history series I did last summer will remember this book because I mentioned it incessantly.  While my focus was on the Livingstone angle and the fate of the Toronto hockey teams, the scope of this work by Morey Holzman and Joseph Nieforth is much broader.  They dissect the founding legends of the National Hockey League and attempt to lay out a corrected storyline that is actually a lot more compelling - though significantly less flattering -  than the version that has been peddled for the last 90-odd years.

Starting with a couple of rejected owners in a Montreal hotel room in 1909 and finishing with the dominant professional hockey league on the continent thirty-some years later, they track the evolution of a league that found ways to get what it wanted.  Some of these ways were perfectly ethical and a natural progression that came from growth.  Others did not quite fit that model.

It's a book about personalities - George Kennedy of the Habs, Sam Lichtenhein of the Wanderers, Tommy Gorman and Edgar Dey in Ottawa, Emmett and Percy Quinn, the Patrick brothers - all jostling for position and influence and trying to shape things they way they wanted.  They would fight - sometimes privately, more often publicly.  They would try to settle in the press what they could not settle on the ice.  The press, too, was no mere spectator.  Many of the people in the book had direct ties to the news media, and many of the reporters of the day were in the direct employ of the people they were covering.  It made for an interesting tangle of relationships.

Two personalities stand out from the rest of the pack, though.  One was a reporter turned league secretary named Frank Calder.  The other was feisty Toronto owner Eddie Livingstone.  By and large, the story that Holzman and Nieforth present comes from the clash between these two men.  Without Eddie Livingstone and Frank Calder, there would be no National Hockey League.

Holzman and Nieforth deserve a lot of credit for the work they do here.  One of the most important things, in my view, is that they looked beyond the traditional sources of information.  Most of the key books on hockey history were based around official NHL sources and original reporting from the hockey hotbeds of Ottawa and Montreal.  This is where the power base was, and this is where the storyline that so flattered the NHL officials was to be found.

Holzman and Nieforth realized two important things: the first was that a lot of the reporters were far too close to the people and events they covered, so they weren't particularly objective in their writing.  The second was that the papers in Toronto and elsewhere (also too close to their sources, let's be clear) offered a rather different perspective on the matter.  Papers even farther removed, such as those on the west coast, offered a sense of context in terms of the rival leagues, context which helps give a reason behind some of the odder actions of the NHA and later the NHL.  Actual court testimony offers the arguments actually made at the time rather than those drummed up post facto in order to explain away behaviour.

What I like most about the work is the level of detail, particularly in terms of the court proceedings and the coverage at the time.  The opinions of those who actually watched things happen are invaluable.  Much as the internet has a memory that never seems to go away, those original reports tell a far different story than was later put forth to reset the public memory.  The language they used, the things they said and didn't say, this all comes forth beautifully in the book and gives it a richness that is truly enjoyable.

While I loved this book and read it numerous times, I do have a couple of gentle criticisms:

As a reader, I get (what I feel) is a fairly good sense of Eddie Livingstone.  When he does something, I can imagine why he might do so based on what I know of his personality.

I have far less of a sense of Frank Calder.  Calder is an interesting case - a journalist with a reputation for integrity who is recruited to serve as league secretary by sportsmen he'd accused of corruption.  He evolves into this Stalinesque dictator who rules by fiat and crushes every other league into submission while running Eddie Livingstone out of professional hockey altogether.

Holzman and Nieforth clearly do not like Frank Calder.  The dislike is so visceral (a little too much so, on occasion), however, that I find it hard to separate anything he did from their portrayal of it.  I come away not understanding Calder much at all.  I don't get his motives or how his transformation took place, if there was a transformation at all.  I get that a biography of Calder was not really their purpose, but it's something I felt was lacking.

The other one is this - Holzman and Nieforth have written the single most important work I have ever seen on the origins of the Toronto Maple Leafs and the role played by Eddie Livingstone in the creation of both the team we follow and the league they play in - and you'd never know it from either the title or the cover.

One thing was proven this past summer no matter how much we wanted it to be otherwise.  If you throw a Maple Leaf logo on the cover of anything, it will sell.  You can put a fan with a bag over his head next to a Leaf logo and people will buy it.  It's sad, but it's true.

This book, with content that Leaf fans would actually be highly interested in, has a pair of vintage gloves on the cover.  It's classy, elegant, carefully understated, and deeply, deeply wrong.

We're a couple of years away from the 100th anniversary of the birth of the Blueshirts and Tecumsehs.  It would seem to be to be a prime opportunity for a re-release of this book.  Get a new foreword written by someone who matters, alter the title a bit (how about "Deceptions and Doublecross: how the NHL conquered hockey and the forgotten history of the Toronto Maple Leafs" - yes, too wordy, but you get the idea) and put the following things on the cover:  the 1928 Leaf logo, mug shots of Frank Calder and Eddie Livingstone, the Stanley Cup and this picture 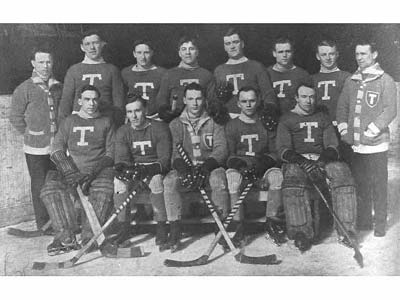 Afterwards, spend the rest of your days sipping mai tais on the small Caribbean island you purchased with your profits and write us periodically to tell us how you're doing.

Otherwise, fantastic work and thanks for dropping by from time to time with your comments.

For the rest of you, go buy this book.  It will be on the exam.