Share All sharing options for: Women Aren't Allowed to Celebrate?

I woke up this morning to find out that the Canadian Women's Ice Hockey team, having won gold in Vancouver, is being investigated by the IOC for celebrating their medal win. Not that being investigated is anything of note; the IOC investigates more pointless gestures than the Vancouver Canucks' Tampering Action Response team.

Greg Brady said it was "classy" of the women's team to apologize for cigar smoking (not indoors in a public place!), alcohol (I'm sure everyone in attendance at the game was sober) and for the underage drinking (quelle horreur!).

It's total bullshit that anyone would suggest they're classy for apologizing. These women have nothing to apologize for. Whenever athletes at the highest level of competition win something meaningful they're justified in celebrating. Worried about beer and cigars? 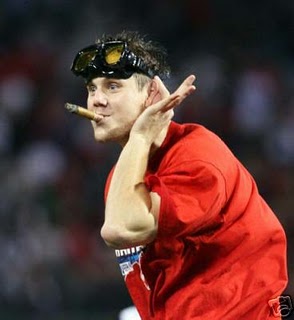 He's wearing goggles because baseball teams spend hours spraying each other with champagne while pounding beer when they win a pennant or World Series. Every year you hear another hysterical story about the time someone got hammered and dropped the Stanley Cup into their pool. 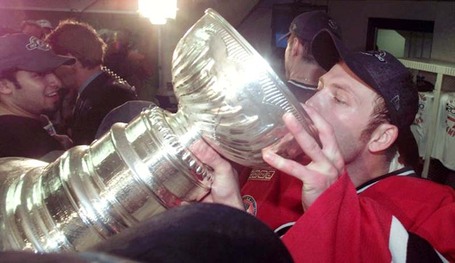 Martin Brodeur was obviously drinking apple juice out of the Stanley Cup in this picture shortly before retiring home early to sleep with his ex-wife's sister in law.

The point of all this is that people called for an apology from the women's team and got one because the women's team is an easy target. They're a group of girls not used to being on the international spotlight who did something any of us would have done.