Share All sharing options for: A Little Local Difficulty 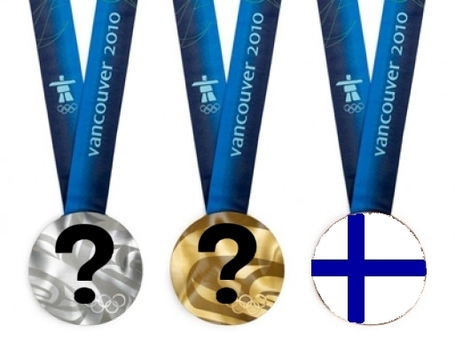 North America was collectively pissed when the Riddler owned the podium.

Well, I don't think this mother needs any more building up from the likes of me. Whatever happens, we're going to be talking and chewing on this for a long, long time. The FTB has no bias of course - that would be unseemly. A solemn wish though :  just that it's a good game and the best team wins. Ah hell, who am I kidding?
C'MON BURKIE!!!!!

Officially now the best of rest: Finland! The Suomi struck back from their horror show against the USA, defeating the Slovakians 5 - 3  to take the bronze. A really good game, played by two teams who actually wanted to win (often an issue with the 3rd/4th playoff) - decided by two goals from lunatic-faced manchild, Oll Jokinen. Nik Hagman, latterly of this parish, potted one too. For the Slovaks, the amazing goals and bionic groins of Marian Gaborik simply weren't enough. That makes it five Olympic hockey medals for the Finns in the last seven games - not a bad return at all.

But enough of such banter, let's get stinkin' linkin'...