Tearing Down and Building Up the Toronto Maple Leafs: Part I

Share All sharing options for: Tearing Down and Building Up the Toronto Maple Leafs: Part I

For better or for worse, these are now Brian Burke's Toronto Maple Leafs.

Well, to be fair and a bit more accurate, perhaps it should be said that these are Brian Burke's transitional Toronto Maple Leafs. After shipping out six players in the Phaneuf andGiguere trades, Burke is responsible for acquiring over 60% of the current Leafs roster.

After the jump, 1980s style WYSIWYG graphics, some poor-man analysis and a bunch of the usual caveats...

As the Leafs are playing Martin Brodeur and the New Jersey Devils tonight, I thought it was only fitting that we start with pie, well pie charts.

Here's a look at the composition of the current Leaf line-up identifying the GM responsible for acquiring the player. 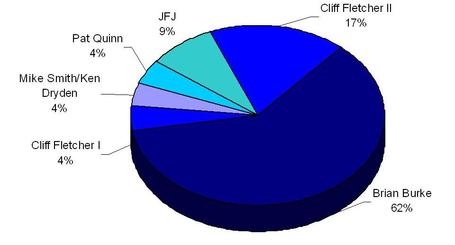 A few notes: the totals include Mike Komisarek but not Mike Van Ryn - only because I crunched all these numbers prior to Komisarek shutting it down for the season. The GM designation is  based on who drafted, traded, claimed off waivers or signed (RFA/UFA/PTO) the player to the Leafs. For example, Tomas Kaberle first made the club under Pat Quinn but was actually drafted all the way back in 1996 under Cliff Fletcher's first go 'round with the club. Because of this, Kaberle goes into the chart as a Cliff Fletcher I acquisition.

Looking Back at How The Leafs Teams Evolved

In just under 15 months, Burke is responsible for acquiring over 60% of his roster. To put that in context, JFJ didn't hit 60% until the fourth year of his tenure as GM.

Amazingly, of that 60% high water mark JFJ hit just two seasons ago, only two of his players, Nikolai Kulemin and Carl Gunnarsson, remain on the current roster.

I think the difference in timing for these two GMs can be partially explained by the state of the teams they took over.

JFJ picked up a 100+ point, veteran ladened squad that appeared to only needed minor tinkering. Burke took over a team that had missed the post-season for three straight seasons and clearly needed a major gutting.

Here's how the Leaf roster has evolved under each GM:

In looking at the chart above, it's interesting to see Quinn's share of the player's shrink (the bright blue bars on top) as JFJ's acquisitions grow and peak in 2007-08 (grey bars at bottom).

There is a huge spike with the arrival of Cliff Fletcher and his clean-the-house mandate in 2008-09. It's also interesting (troubling?) that Fletcher acquired 13 players for the Leafs and of those 13 only four remain.

In sharing this data with PPP, he asked that I go through and have a look at how these teams were built - what per centage were UFAs, RFAs, draft picks, PTOs, and trades. I'll be putting up a part II shortly to look at this in greater detail.