In Game 1, the Leafs came off the ropes Rumble in the Jungle style to force the extra period but couldn't squeak out a decision victory. I blame the judges for this.

In the remath, it was a textbook Mike Tyson first round knockout for the Leafs as they sent the Devils packing.

Tonight we are treated to the creme de la creme of rematches; the rubber match.  And like the Thrilla in Manilla before it, tonight's game between the Buds and the Devils has taken things to a whole new level of excitement. With the addition of Ilya Kovalchuk, the Devils now have one of the most dangerous shooters in the game.  Can the Big Bad Buds body out the Russian Sniper and score on the greatest goalie of all time?

With the addition of Kovalchuk, the Devils are now a huge threat in the Eastern Conference.  While they were a good team before, led by their goaltending; they now have a legitimate offensive threat and should be the favorites to stop the Washington juggernaut from reaching the Stanley Cup Finals. They are now the T-Rex of the East; if T-Rexes carried lightsabers and had New Jersey Devils tattoos on their butts.  And do you know the only thing capable of taking down such a beast?  That's right, ninjas. 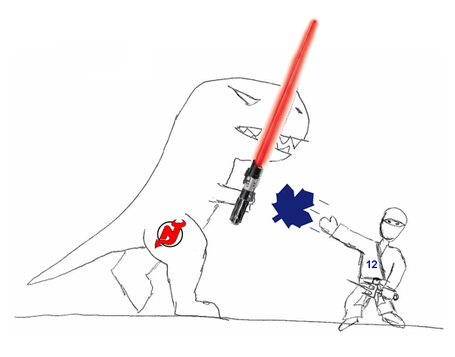 via img46.imageshack.us (Based on original art by Hungry Leafs Fan)

If my feelings hold true The Silent Ninja himself, Lee Stempniak, will play a big role in tonights game...or be turned into T-Rex poo. I'm not really sure which is going to happen to tell you the truth.  But what I am sure of is who'll be playing in tonight's game.

From James Mirtle's Twitter comes this: Jonas Gustavsson will start for the Leafs tonight in New Jersey

That's somewhat surprising as most thought JSG would be getting the start, but it seems like Wilson is saying Giguere to play the role of heart breaker in Saturday's HNIC matchup against the Ottawa Senators; winner of 10 straight.  The forward lines and defensive pairings don't seem to have changed, so expect the same lineup as Tuesday:

On the other side of the red line, there's been a lot of change with 2 players leaving and 1 big bad Russian being added.  Martin Brodeur is getting the start in goal, so breaking him early is going to be key for a Leafs victory. The Devils' lines:

Expect Wilson to change up the Leafs' 2nd and 3rd lines a lot until he finds a formula that works at shutting down that amazing first line of the Devils. I'm thinking a line of Kulemin - Primeau - Stempniak will probably be what he goes with. We'll see if I'm right come game time.

While not as important as Tuesday's game, this game means a whole lot outside of just getting a win. Should the Leafs come away with a win on the night of Kovalchuk's New Jersey unveiling, it would be a huge boost to morale for the team and could really help start a great end to the season.

Definitely expect a faster game than the last two you've seen, and get ready for the fireworks as I suspect the Leafs will want to make an early physical statement in New Jersey. Remember your SPG picks and as always I.... 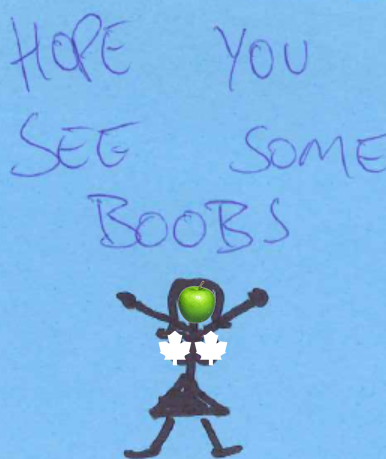