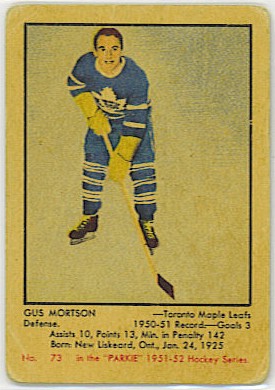 A year or so ago, I put together a post (that needs an update an re-release) called "Leafs by the Numbers" - the objective of which was to pick the best Leaf to have worn any given sweater number.

Number 3 was one that gave me a little bit of trouble, as many of the hall-of-famers who wore it were primarily associated with other numbers and nobody ever seemed to wear it for a long period of time.  Given about 4 years of high-end play, Dion Phaneuf could well be the best #3 the Leafs have had.  The guy he'll unseat, though, is almost the proto-Phaneuf: a truculent, heavy-hitting puck mover known as "Old Hardrock."  His name was Gus Mortson, and he was a key part of the Cup-winning teams of the 1940s.

Gus was one of a large number of players the Leafs took out of the northern Ontario mining country in the 1940s.  He was a guy who could skate and carry the puck, but he was known for being very, very tough to play against.  As one of a number of rookies that made the Leafs in 1946-47, he led the league in penalty minutes.  He did this four times in his career and while a Leaf, he only finished out of the top ten once.

Despite the penalties, he was no slug out there.  He was Toronto's second-leading scorer amongst defensemen every season but his last, was a first-team NHL All-Star in 1950 and played in eight all-star games.  (Of course, some of those he played in because he was part of a Cup winner.  Not all of them, though.)

For most of his Leaf career, Gus was paired with Jim Thomson - they were called the "Gold Dust Twins."  Jim and Gus used to keep track on their own of how many goals they were on the ice for.  In the days before plus/minus stats were available,  and given coach Hap Day's focus on strong team defense, they figured this was their best ammunition at contract time.  The Gold Dust Twins typically averaged less than a goal against per game, and this was in an era where teams typically just ran four defensemen plus a sub.

Gus' strong play on the Leaf blue line allowed him to win four Stanley Cups in his first five years as a player.  After 1951 and the loss of Barilko (to the plane crash) and Broda (to retirement), the Leafs started looking to retool.  Despite the strong play of Al Rollins in the Leaf goal, Conn Smythe wanted the best goalie he could get.  Mortson, Rollins, cal Gardner and Ray Hannigan were thus shipped to Chicago for Harry Lumley.

In the Batten book, Gus talked about how he came to be trade bait.  He'd been struggling a bit and had become something of a target for Conn Smythe.  One night, he was sitting in the dressing room after what he thought was a pretty good game when he saw Smythe headed his way.  "Cripes, Major," he said (or words to that effect) "what'd I do now?"  Smythe went red in the face, turned on his heel and stormed off.  Coach Joe Primeau then told him, "What did you do that for?  The old man was coming to give you a pat on the back!"  There wasn't really a good word after that and Gus went to Chicago.

The loss of Mortson coupled with the loss of Barilko a season earlier left a huge hole in the Toronto defense.  A young Tim Horton did what he could to fill it, but the Leafs of the 50's just weren't the same.

Gus also spoke of a conversation on a golf course that probably took him out of the NHL.  After a number of seasons as captain of the Hawks, Gus went to Detroit for 1958-59.  While golfing with Jack Adams and some other Wings execs, Gus was asked for his take on the Howe-Kennedy incident of 1950.  When Gus told Adams that Kennedy hadn't fouled Howe in any way, that Gordie had simply missed the check and gone face-first into the boards on his own, Adams was livid.  Mortson barely played that season and was then off to the minors, never to return. 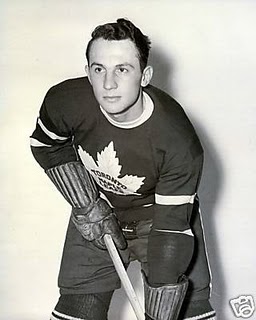 A pic Joe Pelletier had - via 3.bp.blogspot.com 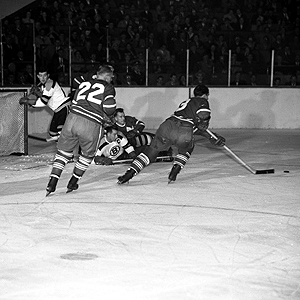 Gus grabs the puck and heads up ice - via www.legendsofhockey.net

- Traded to Chicago by Toronto with Ray Hannigan, Al Rollins and Cal Gardner for Harry Lumley, September 11, 1952.
- Traded to Detroit by Chicago for future considerations, September 3, 1958.
- Claimed on waivers by NY Rangers (Buffalo-AHL) from Detroit, January 17, 1959.


the HHOF take on Gus:

"Gus Mortson grew up in the mining country of Northern Ontario and related analogies have followed him throughout his life. He was sometimes referred to as "Old Hardrock" because of his origins and his style of play.

He graduated from the St. Mike's Majors of the OHA in 1945. He turned pro the following year and joined the Tulsa Oilers of the USHL to serve the customary apprenticeship of the day. But the following year, Leafs' GM Conn Smythe launched a rebuilding campaign on behalf of his club. He brought names like Howie Meeker, Gaye Stewart, Gus Bodnar, and Joe Klukay into the fold. He also elected to take a chance with a couple of young defenders, Jim Thompson and Mortson. The two caught on, Thompson the stay-at-home defender and Mortson the flashier, whirling rusher who had a nose for trouble and abrasive play. The two became known as "The Gold Dust Twins."

Over the six years that followed, the "Twins" served as a defensive foundation during a great run for the Leafs as they captured Stanley Cup victories in 1947, 1948, 1949, and 1951. In 1952, however, the Leafs were in need of first-string goaltender. They managed to pry Harry Lumley away from the Blackhawks in exchange for Cal Gardner, Al Rollins and Mortson.

In the Windy City, Mortson continued his rough-house ways, lasting with the club for a total of six campaigns. By the close 1956-57 season, his villainy was confirmed as he led the league in penalty minutes for the fourth time in his career. In 1958, he was traded to his arch rivals, the Detroit Red Wings, where he concluded his NHL career at the end of the season.

Afterwards, he embarked on a lengthy minor-league stint with stops in Buffalo, Chatham, and Oakville. He finally called it a day in 1966." 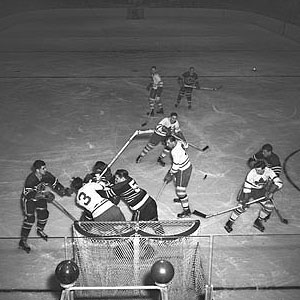 making friends with Chicago - via www.legendsofhockey.net