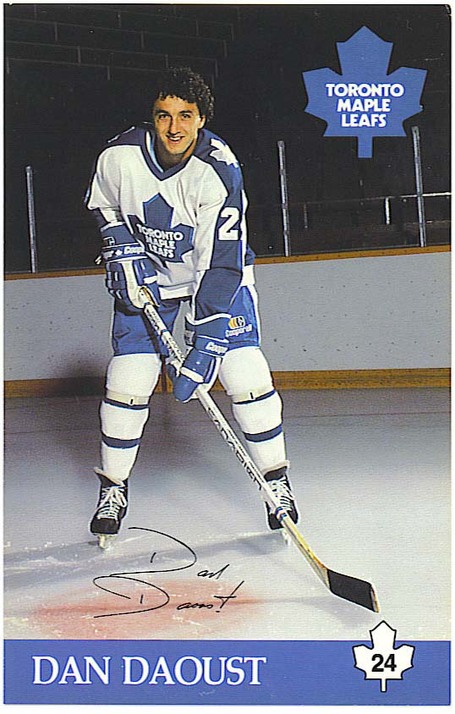 To me, Dan Daoust was sort of a proto-Grabovski, minus any strange pinapple association.  He was a smallish, quick-skating playmaking centre with a bit of a nose for trouble and a willingness to stir things up.

As it was with Grabovski, Montreal had a more rookies than spots available in 1982-83 - particularly at centre.  They had to make a choice between Dan Daoust - a little guy who'd lit it up in junior and in the AHL - and Guy Carbonneau, another rookie they had high hopes for.  They chose Carbonneau and sent the little guy soon to be known as "Danny Do" to Toronto for a third-rounder.

In Toronto, Daoust set about silencing every critic who'd ever said he was too small.  He scored 51 points in just 48 games, made the all-rookie team and periodically bumped Bill Derlago out of his job on the first line.  The fans loved him, chanting "Daouuuuuuuuuuuuuuuuuust" anytime he did anything, which was actually quite often.  He followed this up with 56 assists (tops on the team by quite some margin) and 74 points.  At 24, the world was Dan's oyster.

In 1984-85, things started to slip a bit.  There were offensive slumps all over the place, though, so it's not like Daoust's off year particularly stood out.  Vaive didn't hit 50 for the first time in four years and nobody on the team even reached 70 points.  Dan led the Leafs with 37 assists, but only had 54 points in total.  Things were about to change for him, and change in a huge way.

When I was actually watching the 1985-86 season unfold, the complete and utter collapse of Dan Daoust's offense was one of the biggest shocks of the season.  It probably shouldn't have been.  If I'd thought about it then the way I do now, I'd have seen it coming.  The Leafs had too many centres, and all of them were bigger than Danny Do.

I hadn't read it at the time, but years later I saw that the Leafs approached him about having more of a defensive role.  With Fergus, Courtnall and Ihnacak holding down the top three jobs, all that was really left was a fourth-line checking role and penalty-killing.  Daoust attacked them in his normal fashion and did pretty well at them, but never really scored again - his 8 goals and 20 points that season were the best he'd ever have again.

Though his personal totals were flagging and flagging badly, the team was showing signs of improving.  He got to play playoff games for the first time in his career and was absolutely huge in 1986-87 as the Leafs dumped the Blues on their cans.  Daoust had 5 playoff goals that spring and drove Doug Gilmour (man, I hated that guy) to distraction.  It was so bad that in the seventh game, when it was apparent that the Leafs were going to win, Gilmour went after Danny Do and had to be restrained.  We loved him for that.

After 1989-90, Dan Daoust, still only 30, left the Leafs to play in Europe.  The Leafs had a million centres and truthfully, it didn't look as though he'd be missed much.  In 1990-91, though, the Leafs suddenly found themselves with Mike Krushelnyski centering the top line.  Would there have been a better role out there for a feisty little guy who could score when it mattered?  Might have been a very different outcome from that season if he'd been around. 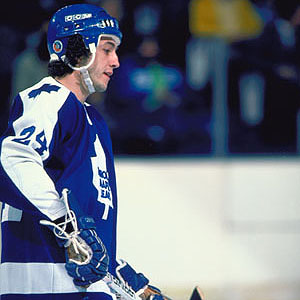 The HHOF take on Danny Do:

Dan Daoust was considered too small by most NHL scouts and was not selected by any NHL team coming out of junior, this despite the fact he had three successful years playing with the Cornwall Royals, where he scored over 40 goals in two seasons while recording 103 points in his final season in 1979-80.

The Montreal Canadiens opted to take a chance on Daoust who listed his height and weight as 5'10" and 160 pounds, though he was somewhat smaller. They signed him as a free agent in 1980. He played two years in the AHL with the Nova Scotia Voyageurs where his offensive production garnered attention from the Habs and other NHL teams. In his first season, Daoust appeared in 80 games, scoring 38 goals and 60 assists for 98 points. He followed that up with a 65-point season in 61 games the following year. Given his lack of size, Daoust realized it would be grit and determination that would earn him a spot in an NHL lineup.

In 1982-83, Daoust was called up to the Montreal Canadiens where he played four games, tallying a lone assist. Soon thereafter, Daoust was off to join the Toronto Maple Leafs, where the bulk of his NHL career would be defined. In 48 games with the Leafs that year, Daoust contributed 18 goals and 33 assists for 51 points. He had high expectations for himself the following year, and he came through as promised. In 78 games, Daoust averaged almost a point per game, scoring 18 times while assisting on 56 others for 74 points. In 1984-85 he played in 79 games, but his production dropped a bit to 54 points. It turned out to be a sign for things to come. In 1985-86, he managed just 20 points in 80 games.

Daoust played a total of eight years in Toronto, becoming a fan favourite along the way. Despite his lack of size, he was always willing to stick his nose into a scrum. The final numbers for Daoust read 522 games played, 87 goals, 167 assists, 254 points, and 544 minutes in penalties. 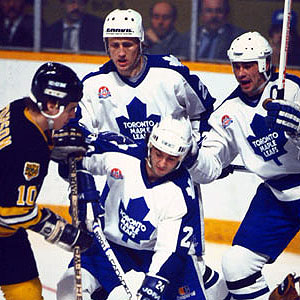 Right in the middle of things, like always - via www.legendsofhockey.net