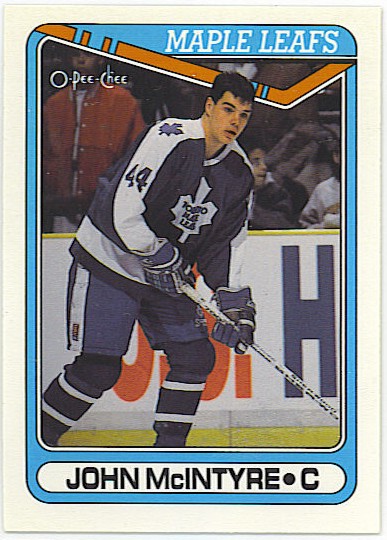 After more than a year's absence, tonight marks the return of "lanky" to the Leaf lineup.  Lanky, of course, left with Nik Antropov.  It returns with the debut of 6'5" Brayden Irwin.  He's not Kazakh, but you can't have everything.

He'll wear #44 tonight.  Other than being a Leaf rookie, that might be the only attribute he shares with John McIntyre.  For this one day, though, it's enough.

McIntyre wasn't tall enough to be lanky.  At 6'1" and 175, he's actually smaller than I remembered him.  He played bigger.  On a team that was lighting the league up with its offense, John scored all of five goals.  That wasn't really his bag.  John was more about checking with great enthusiasm and running into things at high speed.  He did this rather well.

John was only 20 in '89-90 when he made his debut.  He'd come to the Leafs from the Guelph Platers and the 1989 World Junior team.  A two-way player in junior, he'd stick in the NHL as a checker and fourth-liner, carving a niche by being really aggressive in his skating and his hitting, sometimes a little beyond the bounds of what one would consider common sense.  This led him to average just below two penalty minutes per game as a Leaf.

He was a likeable player, though.  He brought more youth to an already young team and played with the kind of abandon you can only have at 20, before injuries or a more developed sense of mortality takes its toll.

When things went south in 1990-91, Johnny Mac was the first casualty and he set the trend for what was to follow.  At 21, he went west for 30-year-old Mike Krushelnyski.  Thankfully, the is precisely the sort of deal that has been avoided this year.  It's not that Krushelnyski was bad - he wound up centering the top line and was a decent checker after that.  It's just that trade after trade sent youth and promise for age and diminishing returns.

Post Leafs, John managed to scratch out a 350-game NHL career as a checker and energy guy with LA, the Rangers and Vancouver, reaching the Stanley Cup Final in 1994.  He retired in 1996 at age 27.

A good old Norris Division game.  Chelios was already a veteran even then:

The HHOF take on John:

John McIntyre was a scrappy defensive centre who had many tricks up his sleeve that could throw off opposing forwards. A decent scorer in junior, he carved out a six-year NHL career by focusing on his checking assignments and battling hard in the corners and the slot.

The native of Ravenswood, Ontario played Junior B with the Strathroy Rockets before joining the OHL's Guelph Platers in 1985-86. During his rookie season, he helped the club win the Memorial Cup. McIntyre was chosen 49th overall by the Toronto Maple Leafs in 1987 and was the top-two way pivot his last two years in the OHL. In 1989, he was a member of Team Canada when it finished fourth at the World Junior Championships.

As a rookie, the young forward played 59 games as one of the few checkers on the offensive-minded Toronto Maple Leafs in 1989-90. The next year, he was sent to the Los Angeles Kings in exchange for veteran Mike Krushelnyski. McIntyre saw plenty of ice time as a defensive shadow and penalty killer and helped his new club reach the second round of the 1991 playoffs.

Late in the 1992-93 season, the Kings traded McIntyre to the New York Rangers. Early the next year he was picked up on waivers by the Vancouver Canucks where he played two seasons as a checker. McIntyre retired in 1996 after playing 53 games for the AHL's Syracuse Crunch. 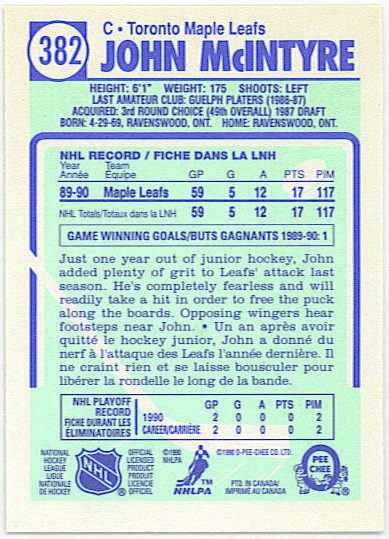