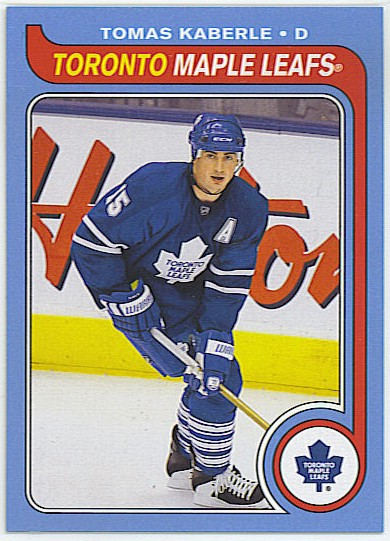 Well, for the fifth time in as many years, I'm finishing the LotD series (maybe - there's still the Brophy to do and I'd like a peek at the young'uns, so we'll see) with a recap that doesn't have anything to do with the playoffs.  I think it is now fair to say that this drought, completely aligned with the existence of the LotD posts, is entirely my fault.  I'm not dead sure what I would do instead of the LotD but clearly it needs to be something.  I don't want to completely abandon the concept, because even though this year got kind of taxing at times, it's still kind of entertaining.  Maybe a good rebranding is in order.

After a year that turned out to be about roster turnover more than just about anything, a good deal of focus this summer is going to be placed on the guy who doesn't (or at least didn't) want to go.  Kaberle has been traded twice in the past three seasons, netting the Leafs Jeff Carter, Philly's first-round pick, Phil Kessel and Boston's first - and yet he's still here and all but one of those other assets isn't.

I do think it's more than a little unfair, after all the angst surrounding players in various sports who leave this city, that a guy would be vilified for wanting to stay at all costs, but that seems to be the fate of Tomas Kaberle.

Tomas is not only the lone holdover from the JFJ era, he's the lone survivor of Mike Smith's tenure as GM.  He broke in with this team in 1998-99, the first year Pat Quinn was coach, and was soon part of a young trio on defense (with Berard and Markov) that I thought would be Leaf mainstays for a decade.  Those were exciting times - a team on the rise that made the final four twice, hit 100+ points with some regularity and were legitimate challengers for the Stanley Cup.

The Leafs' fortunes tumbled after the lockout ended, but Tomas, if anything, played better.  He hit for 67 points in 2004-05 - other than McCabe's 68 points the same season, this was the highest total since Salming patrolled the blue line.  He was one of a core of players the Leafs locked up in long-term deals - the building blocks of the eventual resurgence.

The resurgence never happened, of course.  Kaberle got his bell rung on a bad hit by Cam Janssens and that seemed to set him back.  That talented core became known not as the future but rather "the Muskoka 5" - a group of players with no-trade contracts who supposedly banded together to thwart a team rebuild.  Kaberle, in particular, was ripped (and still is) for vetoing a trade to Philadelphia that had young centre Jeff Carter and a first-round pick coming in return.  Last year at the draft, he was traded again, in a deal that fell apart when Brian Burke and the Bruins' Peter Chiarelli couldn't figure out whose pick was going where.

This summer, Kaberle looks to me to be a goner.  Burke has made mention of him signing an extension, but I can't really imagine that happening.  Kaberle will either want a raise or a new NTC and I don't really see either of those being available, not given the money already spent on the blue line and Burke's aversion to no-trade contracts.

He'll draw something on the trade market, though I'm not sure what.  Personally, I'd rather a good prospect than a first-rounder in the back half of a weakish draft.
Kaberle could still be a good fit on a strong team.  He reminds me, if anything, of Larry Murphy in his last days here.  He has a skill set that doesn't really fit the team he plays on.  He's a passer on a team without a ton of finish, and he's never been the kind of defender that you anchor a defense with.  If he were to land with a team like Detroit, like Murphy did, they'll probably love him.

I'll be sad to see him go.  I like guys who have a bit of history with a team and once Kaberle is out of here, the career leader in games played by a Leaf becomes Nik Kulemin with 151 - tied with the aforementioned Larry Murphy, Dave Burrows and Rick Lanz.  Had Tomas managed four more goals, he'd have passed Iafrate, McKenny and McCabe and stood fourth overall in goals by a defenseman.  Post-Kaberle, the career lead in goals is again Kulemin, with 31, and the career leader on the blue line is actually Jeff Finger with 8.  I don't think I'll have to do a milestone watch for a while.

That's not to say that I don't think moving Kaberle is the right thing to do.  It's probably the best for everyone at this point.  I'm on board with most of the moves Burke made and I don't find this team even remotely as depressing as the one we were left with in 1991.  I don't even really care who Boston drafts with the pick.  The Leafs are young and have promise.  With a Kaberle deal, perhaps they will become moreso, and Kabs can get his groove back in a different environment. 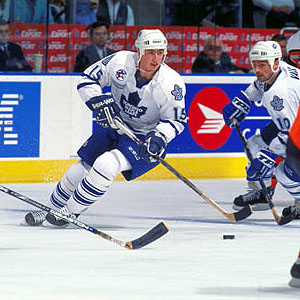 Tomas in happier days - via www.legendsofhockey.net

The HHOF take on Tomas:

Only 18 years old, Tomas Kaberle was drafted 204th overall in 1996 NHL Entry Draft by the Toronto Maple Leafs. His father had been a Czech hockey representative and it was he who taught his sons the game of hockey. Tomas grew up in Kladno, 20 kilometers west of Prague. Kladno's most famous hockey talent is none other than Jaromir Jagr. But then Tomas Kaberle appeared in the training camp for the first time in 1997. He tested Canadian ice during two games with a farm team in St. John's, Newfoundland, but returned to the Czech Republic at the age of 19 to play 47 games for his old team Poldi Kladno, registering four goals and 18 assists.

In September 1998 he was back in Toronto. This time he garnered the attention of coach Pat Quinn, who put him through the hoops. His verdict actually came as a surprise to Kaberle. He was to stay with the team on a trial basis. He could not believe the news. And Pat Quinn did not leave him on the bench, sending him out onto the ice at every opportunity. It was a chance for Kaberle to refine his game. Kaberle played well and with time, he got more daring.

But the first season was not easy. He went through a crisis and suffered from fatigue. While he was taking a rest from the game, it began to look as if he might never see Stanley Cup playoff action. Ultimately this move, however, proved to be the right one. Kaberle, rested up and anxious to get back in the game, appeared in the Stanley Cup playoffs after all and played brilliantly. The Toronto Maple Leafs fought their way to the semi-finals where they were eliminated by the Buffalo Sabres.

From the start of the 1999-2000 season, Tomas Kaberle provided constant support for his team. He had acquired a healthy self-confidence and started collecting points. Though, like most defenceman, he earned his points mainly from passes, he even started scoring and is on his way to becoming one of the top defencemen in the league.

A member of the Czech Republic's Olympic Team in 2002, Kaberle would miss 13 games during the 2001-02 regular season before helping the Leafs reach the Eastern Conference Final against the surprising Carolina Hurricanes. In 2002-03 Kaberle suited up for all 82 games, establishing career highs in goals (11) and points (47).

In 2003-04, Kaberle played his 400th NHL game and surpassed the 200-point plateau. He spent the following season competing in Kladno due to the NHL lockout, and returned to the blue and white for the start of the 2005-06 season. That season, Kaberle tallied a career high 67 points and won a Bronze Medal representing Czech Republic at the 2006 Winter Olympics. 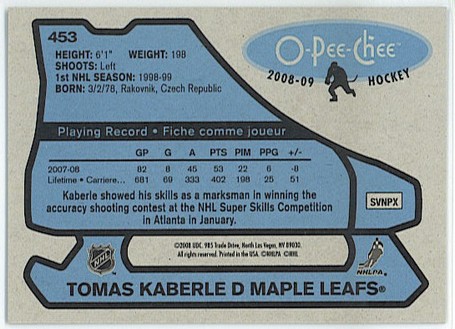 Just as an aside, I've contemplated this for the LotD a couple of times - including today - but why give anyone ammunition they don't deserve? 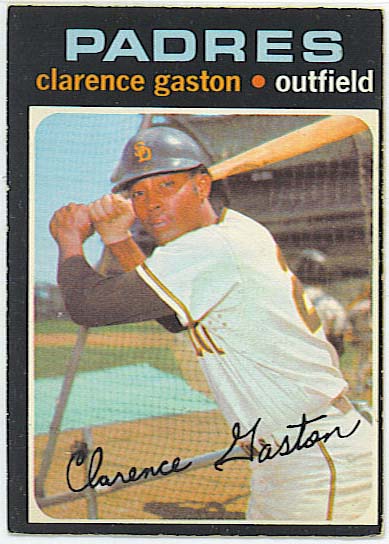