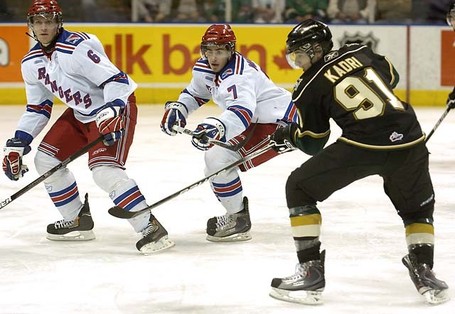 Oh playoffs, how I've missed you. The first round has wrapped up in the CHL and most of our boys have made the cut. Why not have a look-see at how they're doing to this point?

Remember how last time we checked in, Kadri was on a ridiculous and totally unsustainable scoring pace, with 8 points in 3 games? Well... yeah. He's now sitting with 16 points in 6 games, putting him 4 points ahead of the rest of the pack for the OHL lead. Turns out he didn't get suspended for his misconduct at the end of game three of the first round, either. He picked up 4 points in game five to help London move past Guelph. They now face Kadri's old club, Kitchener, where Naz had two points in a game one victory. A parting stat: Kadri has two points or more in every game this post-season.

The Spitfires completed the sweep of Erie in the first round, setting up a Windsor-Plymouth second round matchup that gives scouts and prospectofiles wet dreams: Kenny Ryan and Dale Mitchell vs. Jamie Devane. Ryan has two points through five games; Windsor took game one of the Plymouth series.

Devane has picked up an assist through six games, and dropped the gloves for the second time this post-season against Windsor's Zack Kassian in game one of the second round. Mostly just glancing blows in this one, but Devane shows a willingness to go for the knockout. The heavyweight is a plus player as well, which is a positive. Is that pun worthy of capital pun-ishment? ...Shoot me.

Mtchell has cooled off, or at least as much as one can cool off in the span of two games. He's got one point since our last checkup, sitting in a tie for 3rd in Windsor scoring with 6 in 5 games. An interesting stat that I can't really explain: he's one of the only Spits with an even plus-minus. Most other main contributors are between +3 and +8.

Future team goat Smith finished with a -1 rating through three games, as Peterborough was swept by Mississauga in the first round. I have nothing else to say about this player so hey look at this picture of Aki Berg.

Paradis and the Cataractes were eliminated in six games by Victoriaville, with the former 1st rounder picking up three points in those six games. He also tied for 5th among Q forwards in hits, dishing out 18.

Grabbo 2.0 collected 9 points in 5 first round games, which are pretty impressive totals. The Remparts downed Acadie-Bathurst and will play Victoriaville in the second round. Two of his three goals were with the man advantage, and one was a game winner.

Champagne ended the first round at a point-per-game clip, with 6 in 6. His Tigres ousted Shawinigan and will play Quebec and Stefanovich in the second round. He has four goals, with three coming on the PP and one a game winner. His faceoff skills continue to impress; 178 draws taken puts him second in the league, winning 56.7% of those.

There's little to update on the always-arousing DiDo since last time, as the puck doesn't drop on the second round until Friday and the Volts had already swept Lewiston at last checkup. I can tell you they'll meet 9th ranked Rimouski in the second round, and shouldn't have much trouble with them. DiDomenico's 10 points in 4 games gives him the highest points per game in the league.

So just two CHL Leafs prospects out in the first round, including one that had to go as Paradis and Champagne faced off in the first round. All of the OHL prospects that have advanced already have game one of the second round under their belt. Because the QMJHL is terrible at scheduling, the second round kicks off with all teams in action Friday and Saturday, nothing on Sunday, one game on Monday, rinse and repeat. Until next week, follow me on Twitter and rest easy knowing that somewhere, Nazem Kadri is lighting a goalie up.