The crazy part about building a big community is how diverse our membership is. One of our members, sleza, is Finnish and doesn't care about the Leafs at all. However because we're lucky enough to have her she's kind enough to translate Finnish articles for us. Her translation of this article:

Jussi Rynnäs, who attracted NHL teams interest during this season, will continue his career on the other side of the pond (Atlantic ocean). The goalie’s new club is Toronto Maple Leafs. Satakunnan Kansa was the first one to break the news.

There was a big competition for Rynnäs during the whole spring. Finally the man chose Toronto to his destination, which he believes is the best place for him the develop to NHL level goaltender.

Nice move by the front office again, hopefully Rynnas and the Monster give us some goaltending stability. 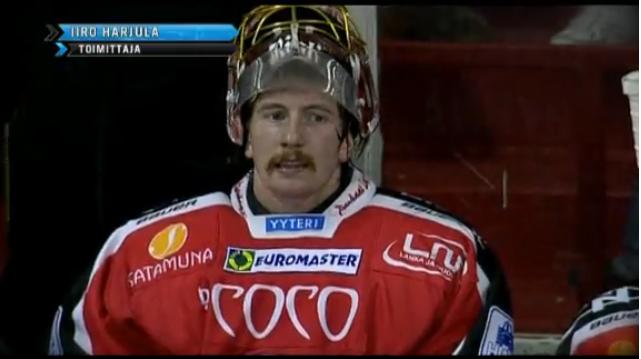 Update: According to sleza the article the above article links to claims Rynnas has signed a two year two way deal. Rynnas will play with the Marlies and likely platoon with Reimer.

Update II: Despite official North American sources still seeking confirmation a couple of European twitterers/reporters have confirmed that this is a done deal:

@mlse source of the story is newspaper from Rynnas' home city. Good sports section, guys always knows what they are writing.

@DarrenDreger Rynnäs to TOR is a done deal. Rynnäs himself has confirmed it. 2-way deal for 2 years.

Update III: Our old friend Joe Nieuwendyk has confirmed that they missed out on another goalie to Toronto:

@DamoSpin Rynnas' deal with Toronto will be for 3 yrs because he falls under entry level system. So it extends longer that Gustavsson's or Giguere's.

Update V: Predictably, a member of the Toronto sports media complex was wrong about something pertaining to the Collective Bargaining Agreement.

This doesn’t make sense to me. Why would Rynnas be subject to a three-year deal? He’ll be 23 by the time September 15 rolls around, meaning he only needs to sign for two years according to the CBA – 9.1b. It would still be considered an “entry-level” SPC.

Rynnas is 22 years old, which by definition in the CBA means that NHL teams can only offer him a two-year contract.

The three-year ELC applies to players 18-21 only.

Players aged 25+ not subject to an ELC.

I assume it'll be corrected soon enough but maybe someone could e-mail Damien ;)