Share All sharing options for: A Night At The Ricoh: Marlie 1 v. Moose 3

On Friday night I was a guest of the Toronto Marlies as I lay witness to the Marlies playoff push. The now deceased push was in its final throes and Friday night, despite a spirited effort, was one more nail in the coffin as the Marlies fell 3-1 to AHL powerhouse Manitoba Moose. This was the first time I had been back to the Ricoh since I went to see these two teams face off during the playoffs. Last year the Moose were on their way to being finalists in the Calder Cup. This year they are significantly worse but were still good enough to make the playoffs.

Dallas Eakins replaced Greg Gilbert as the head coach of the Toronto Marlies prior to the beginning of this year. He was most recently the Director of Player Development. I would imagine that the move was made in order to get someone behind the bench who had a better understanding of the team's approach to developing players rather than someone that was looking to get back to the NHL. This is a year in transition as the Maple Leafs still do not have the majority of their prospects with the Marlies and they even had some Anaheim Ducks players but what I saw was a team that played, at least for one night, in much the way as Brian Burke envisions the Leafs playing. In fact, just as the Marlies mirrored the team last year they did so once again. The Marlies tried to push the game up ice at every opportunity, to get the puck behind the opposition's defence, and, most importantly, they tried to hit everything that moved. It was a nice turn from the many flat Leafs games I have attended to see a team intent on driving their opponent through the boards.

Come over the jump for pictures and videos.

My last post had a lot of things that the Marlies could improve. One thing I noted, that could be a good sign, is that they have done a lot more to draw kids. Fully a third at least of the crowd was probably under 10. The Marlies Girls did a lot of outreach with the enamoured boys that wanted pictures and danced along. It was pretty cute. They also brought out a couple of minor league kids. The ticket prices haven't changed so the move towards making the Marlies a family outing is only really half done but the crowd was easily double what was there last year. One of the revelations that came out of Leafs Abomination was that MLSE had budgeted for the Marlies to make millions of dollars a year. MLSE needs to focus more on the player development benefits and using the Marlies as a way to expose younger fans to future Maple Leafs in order to cement their fandom. The outreach is one step but bringing ticket prices and concessions more in line with the reality of being a minor league franchise in a major league city is the more important one. Of course, that's a whole other post. I would note that there is a Smoke's Poutinerie booth in the Ricoh now which would have been awesome but it was Good Friday >:(. Anyway, back to the game.

Just over a week ago Brown University's captain decided to sign with the Manitoba Moose after completing four years in the NCAA. All full of piss and vinegar Aaron Volpatti decided to challenge a Toronto Marlies fixture Phil Oreskovic to a scrap. All in all things went about as well as he could have hoped for when facing someone for who this was not his first rodeo. Oreskovic was a pretty big disappointment. Putting aside his -22 on the year he did not play a particularly good game. 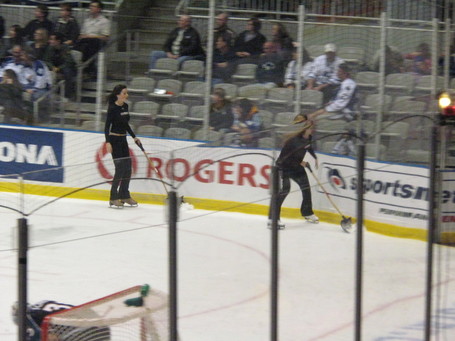 Why don't the Maple Leafs have Ice Girls? 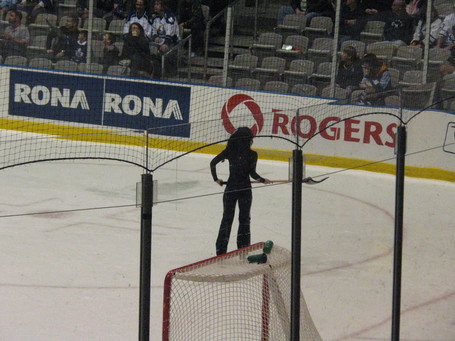 They don't seem distracting. In fact, the players were

The Manitoba Moose were missing their best player as Michael Grabner has been called up to the Vancouver Canucks but Mario Bliznak, he of nine goals in 71 games previous to Friday, was more than the Marlies could handle. He took advantage of a couple of defensive miscues to pot two goals despite the best efforts of James Reimer who played a key role in keeping the Marlies in the game through the first two periods when they were being overrun.

Reimer is perhaps part of the future of goaltending for the Toronto Maple Leafs. He missed a number of games because of a high ankle sprain which restricted him to 24 games played. However, in those 24 his save percentage, .926, would be good enough to rank second in the AHL while his goals against average, 2.24, would have him sitting in fifth in the league. Of the 24 games in which he has played he has only had five where his save perecntage was less than .900. What I saw was a goalie that has strong technique. He squared up to the shooters well and smothered most shots. I don't know if he's been working with Francois Allaire but he certainly seemed to be playing in a similar fashion to how Gustavsson and Giguere have played over the past month. When he did give up rebounds he had the reflexes to save the situation.

The Marlies' had four powerplays that they were unable to convert. Much like the Maple Leafs they struggled to create any good scoring opportunities despite mainting periods of pressure. The video about is a snapshot of what the majority of the time on the powerplay looked like: little bit of possession, chase the puck back down the ice, come at the Moose with speed, force most players to stop at the blueline, and then kill themselves to chase down the puck.


And now, for a musical interlude - Opus Road

At this point, things were incredibly desperate. The Marlies played almost the entire final six minutes with the net empty. The pressure was intense but they only managed one goal by captain Ben Ondrus. Much like on their powerplays, the Marlies chased the puck like demons but failed to create much of anything. The loss basically sealed their playoff (or lack thereof) fate. In terms of prospects, I won't lie, it was hard to follow without a program. One I did notice that had a pretty decent game was recent signing Simon Gysbers. He looked poised on the puck even though he was, as expected, muscled off of the puck frequently. Another year or two on the Marlies will be beneficial but he's obviously a long shot. The latest signing, Philippe Paradis, didn't get much ice-time which is no surprise as he joined the Marlies earlier in the day. He did show some good speed but looks pretty small on the ice. The bright side is that he'll get plenty of time to work on his game with the Marlies.

Now, onto a treat for everyone that made it this far: 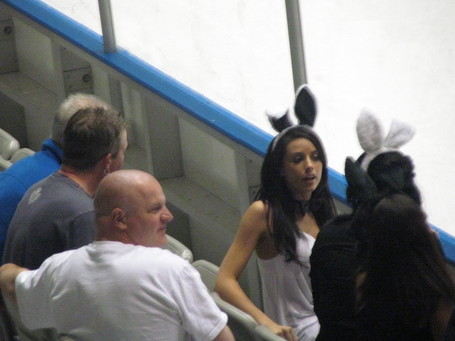 This is the hottest of four girls that caught the imagination of every male in our corner of the rink. It was pretty funny to see a couple of 40/50 year olds try to throw some game at them. The rabbit ears threw my buddy and I off a bit and led to the following exchanges:

While watching those two chat up the healthy scratches

Anyway, the Marlies are playing out the string. They'll have two games left at home this coming weekend. I won't be making it out but Chansler will be out there and giving away a signed Luke Schenn jersey if that's your bag.