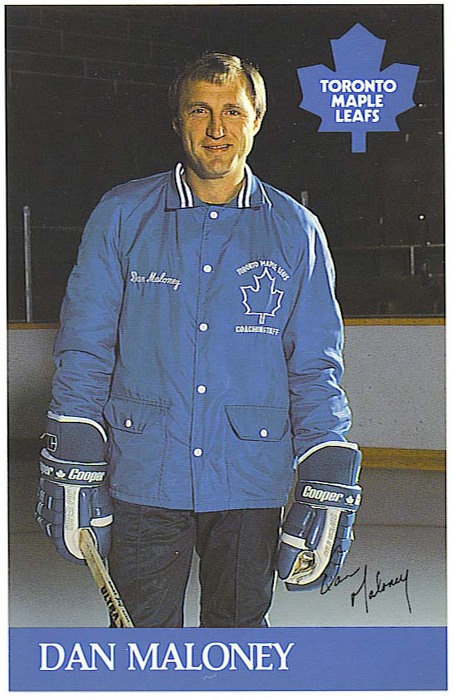 I've made the comment before, but no matter what you do in life, never make the mistake of wishing that you had a little bit more to do.  It can only end badly.  I was checking my calendar and I think I can schedule five minutes to myself next Thursday at 3:42 am.  :)

The end of the season is upon us and with it approaches the end of the '84-85 Leafs, who by an astonishing coincidence, didn't manage to make the playoffs either.  There is one postcard left in the series after this - assistant coach John Brophy.  We'll see whether I can stomach doing that one.  I bet I can.  I'm a Leaf fan, after all.  There is no limit to the abuse I can take.

Today, it's head coach Dan Maloney.  1984-85 was his first season behind the bench, and the Leafs made their first last-place finish since 1957-58.  They'd placed last in their division a couple of times, but this was the first time they were last overall, and it afforded them their first-ever attempt at a number one draft pick.

It wasn't Maloney's fault the team was as bad as it was.  They opened the season with two goaltenders who were too young to order a drink in most road cities they played, four defensemen aged 18-22 and a precious few forwards who knew which end of the rink was their own.  They didn't find a reliable goaltender until they called up Tim Bernhardt in December, and even he didn't manage a win in his first month.  Dan himself was only 34.  He'd been playing for the Leafs just two seasons earlier.

What I remember about Dan Maloney the coach was that he had the best "angry face" of any coach I've ever seen.  When Dan the coach was mad, it was frightening to even be watching the game on TV.  How any referee ever approached the bench is beyond me.  It's possible that John Brophy might have actually been meaner, but Dan certainly looked meaner.

Dan got to use that angry face a lot.

Maloney would coach the Leafs for only two years.  The '85-86 Leafs got off to an even worse start than this team did, going 1-12-3 through their first 16 and they were only 6-30-5 in January.  They would get "hot" enough to end the year with 57 points and a first-round date with the (vaguely) mighty Chicago Black Hawks in the first round.  Yes - 57 points was good enough for fourth in the division.  Detroit went 17-57-6 for only 40.  They drafted Joe Murphy first overall - remember him?

The Leafs, 29 points behind Chicago in the regular season, dumped the Hawks on their cans in the first round, winning three straight including a 7-2 thumping in the clincher.  That was their first playoff series win since a 1979 best-of-three against Atlanta.  They then took the Blues to seven games before losing in the second round.

With a finish like that, there was hope amongst Leafs fans.  The team was starting to take shape, they were playing more the way that Maloney wanted and things were heading in the right direction.  Maloney, whose deal was up, approached Harold Ballard about a new contract.  Maloney was asking for three years, Ballard would only go for two, and presto-changeo, John Brophy was the new head coach.

Maloney would be hired by the Winnipeg Jets, and in his first season took them from 59 to 88 points.  That .550 winning percentage is the fourth highest in the 30-season NHL history of the Jets/Coyotes.  He'd last another year and a half there before being let go.  Rick Bowness, who replaced him, did significantly worse.  The Jets really had no goaltending.

the HHOF take on Dan:

If there was ever a player who molded his career on a strong work ethic and tenacity, it was Dan Maloney, who always gave the proverbial 110 per cent.

At the age of 17, lanky Dan Maloney played Junior B hockey with the Markham Waxers, where he was one of the team's best two-way players, and always showed an interest in the fisticuffs if need be. At 18, he moved on to major junior, suiting up for the London Knights in 1968-69. The following year Maloney received much more ice time and was gaining lots of attention from NHL scouts, who liked his ability to generate offense while at the same time showing a willingness to take care of the tough stuff, as evidenced by his 232 minutes in the penalty box.

The Chicago Blackhawks selected Maloney with the 14th pick overall in the 1970 NHL Amateur Draft. Maloney played in the Blackhawks organization for almost three years, and became known as one of the enforcers, both with Chicago and the club's minor-league affiliate in Dallas. Late in the 1972-73 season, he was traded to the Los Angeles Kings for Ralph Backstrom.

After spending two years on the west coast in relative anonymity, Maloney was traded to the Detroit Red Wings as part of a blockbuster deal that also saw Terry Harper move to the Motor City in the famous Marcel Dionne trade. Maloney spent the better part of three seasons in Detroit before being traded to the Toronto Maple Leafs at the 1978 NHL Entry Draft. He remained in a Maple Leafs' uniform until retiring in 1982 at the age of 31.

Following his career as a player, Maloney took to the coaching ranks, and served as the bench boss for the Toronto Maple Leafs from 1984 to 1986. He was not out of a job for long, as another former team he'd played with, the Winnipeg Jets, signed him to take over the head coaching duties on June 20, 1986, succeeding John Ferguson who had been filling in on an interim basis. Maloney lasted almost three years in the post, but sub-par on-ice performances and the inability to get past the powerful Edmonton Oilers in the playoffs led to his demise on February 7, 1989 when he was replaced by Rick Bowness. 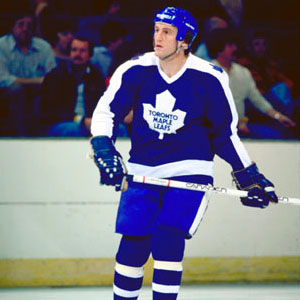