Is it possible that the Leafs messed up and missed out on one of the best players in NHL history because of incompetence? Or is there another explanation...

Share All sharing options for: Bad History and Bobby Orr

Aside from being absurdly busy on all fronts of late, I've also been struck by a case of writer's block about the size of my grandmother's old Pontiac Laurentian. (For those who never heard of/saw such a car, they were stinkin' big. Comfy, though.)

It's got to the point where if I don't break it with something, I have no idea when I'll write anything again.

I had started down the road of the great Leaf teams of the 1940s - the ones that set the standard for every champion between 1942 and 1967 - and how they came to be what they were. I'll probably still tangle with that. Just not yet.

I write about the things that I do for a number of reasons. The first is that it's stuff that's of interest to me. I like history in general, I like learning about the game of hockey, the people who were part of it, and what they were all about. Whenever I do a post, I can pretty much guarantee there's something new I learned while researching it. There are very few things I can do purely off the top of my head, so each post is a chance for me to learn something even as I present it.

The second is that it offers an opportunity to look at things a little differently. If Luke Schenn is struggling early, I can write the 7000th post about it, or I can talk about Gary Nylund and tie it back. There's very little under the sun that is truly new. We can always look at how things went the last time around and see whether it relates to what we are seeing today.

The third is that I see no other team for whom history is so repeatedly abused as is that of the Leafs. We, as fans, are continually beaten around the head with the history of this team, yet most of us don't really know it, and most of those who try to beat us with it really don't know it either, or at least don't really understand the things they do know.

One of the tendencies I find particulary galling is the out-of-context factoid - something that may be true in and of itself but would be seen rather differently in its original context. Remember the bit in Leafs Abomination about the stupid Leafs failing to protect a 25-year-old Gerry Cheevers in the 1965 Intraleague draft? About how they were so short-sighted they wouldn't hold on to a Hall-of-Famer because they'd have to expose one of their aging starters? We dealt with that. It sounds awful until you consider that a) those aging starters were the defending Vezina winners; b) Cheevers didn't establish himself as a regular until 1967-68, which would have left the Leafs with just half of an NHL tandem; c) they won the 1967 Stanley Cup on Sawchuk's wonky back; and d) other than 1969-70, no Leaf team struggled in net until 1972-73, by which time Cheevers had already bolted to the WHA.

At any rate, there's another one. I've even mentioned it before, but I've never had the full text of the relevant letters available to me until now, so here it is.

If you don't know this, you should:

The Leafs had first crack at Bobby Orr, and turned him down sight unseen.

This isn't as bad as the Rangers, who actually had Gordie Howe in camp and told him he'd never make it in the NHL, but it's pretty damning. The Leafs also had Brad Park in their back yard and managed to miss him, but Park was no Orr. Try to imagine Bobby Orr making those dazzling rushes wearing blue and white. How many more Cup banners would hang from the ACC? How would Bruin fans deal with a drought stretching back to 1939? How could the Leafs be so stupid? 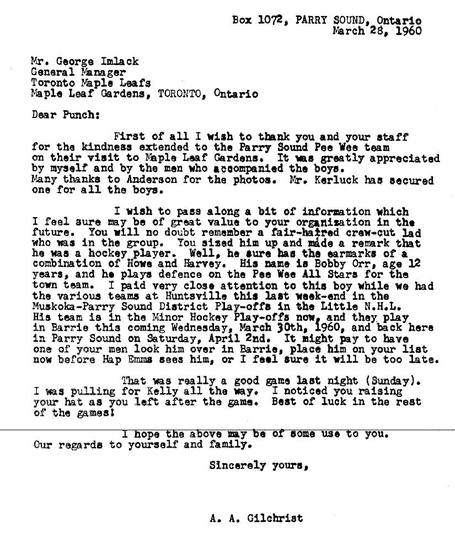 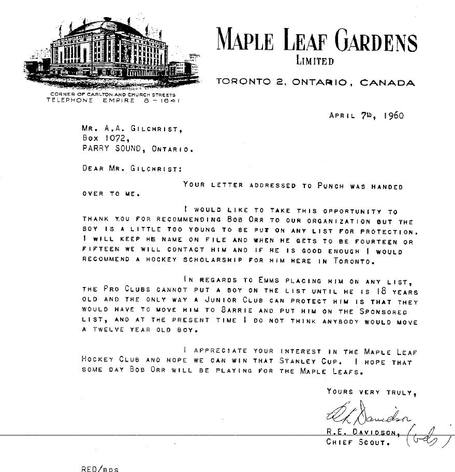 Pretty harsh to see it in black and white, isn't it? Should Bob Davidson's name be cast into the fires next to Pal Hal's?

I've long thought so, but let's try a little exercise.

First - read the first letter again, but this time, let's switch the name. This letter stands out because we all know who Orr became. But instead of Bobby Orr, let the name in the first letter read Melvin Klumpf, or something.

In and of itself, is there anything remarkable about this letter? It describes a 12-year-old kid from a backwater town playing against relatively nondescript opponents. It says nothing about his play, what makes him remarkable and why it's so important to look at this kid three years early. The system deals with kids of 14 or 15. There is no mechanism for dealing with a boy of 12.

If you're the head scout of the Toronto Maple Leafs, what would you do with young Melvin Klumpf? The letter itself doesn't really say a lot. To me, whether I took it seriously would depend on a number of factors. Who is A.A. Gilchrist? Is he someone I've dealt with? Does he have a good track record of finding talent? Is he the boy who cried wolf?

More importantly, as Bob Davidson, how many of these letters do I get? Is this one of one, one of ten, one of a thousand? Does every parent with a kid who can skate send a letter to the Toronto Maple Leafs saying, "Come look at my boy?" If you get a significant number of these, how can you possibly distinguish the one that you should be jumping at? You can't possibly follow up on all of them.

Hindsight says the Leafs needed to take this letter seriously and move heaven and earth to get this kid under their control, and they didn't. Hindsight, as always, is 20/20. But in the spring of 1960, did this letter stand out in any way, shape or form? Does anything say, "in this case, the normal rules don't apply?"

I find myself unable to really condemn Bob Davidson for this one. Boston clued into Orr the same way the Leafs found Salming - by accident. They were at a tournament to watch someone from Gananoque and their eyes bugged out at a player they'd never heard of. They had a scout - Wren Blair - who then glued himself to the Orrs for years to make sure they'd sign once Bobby was ready. The Leafs never saw Bobby Orr. They simply got a letter saying "It might pay to have one of your men look him over" and didn't realize what it meant. Them's just the breaks.

Maybe now, though, if they get a letter addressed to "Brian Burk" containing a tip on some kid from a backwater third-tier college who the writer says is a combination Sidney Crosby/Nik Lidstrom, they'll take it seriously.

Or, more likely, they won't.

Just don't let the bloody Bruins get him again, though.

h/t to Sports Card Forum, who had the images of the letters.