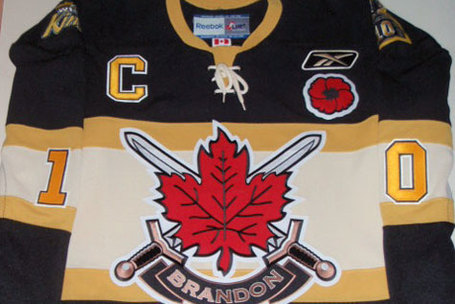 It's been a while since our last prospect update. Chalk that up to me completing my final assignment for college along with the fact that only two Leafs prospects advanced to their league final series. We're back to take a final look at the season for a pair of Q-Leaguers, and a look ahead to Windsor's second straight Memorial Cup appearance.

Last we checked was back in the early going of the semi-finals. The Spits had been trailing Kitchener, going down 3-0 in the series before mounting a huge come back and winning in seven. They went on to sweep Barrie for the OHL championship and will begin their Memorial Cup defense on Friday. Ryan finished with 3 goals and 2 assist in 19 playoff games. His role will increase as overagers move on next season. Of some concern is Ryan's plus/minus of -2. There were twice as many Spitfires with double-digit positives than there were with negatives in the playoffs. At least Ryan keeps good company; Cam Fowler and Greg Nemisz were the other players in the red.

Mitchell's production was solid-if-not-spectacular, at least compared to last year's run. He had 17 points through 19 games, down from 29 in 20 last season. Either way, Mitchell has a pair of OHL championships under his belt and could add a second Memorial Cup to his resume. Fun fact: Both of our Windsor boys have a total of zero last names. The Spits play host team Brandon on Friday in the tournament opener.

Champagne finished with 13 points in 16 games, dropping their semi-final matchup against Saint John in 6 games. He was one of the top faceoff men through the course of the playoffs as well, taking the second most in the Q with 436; Kelsey Tessier had 559 in an extra 5 games played. Champagne finished with a 58.5% efficiency in the circle, third among players with more than 100 faceoffs taken. I would expect him to jump to the Marlies next year.

The rollercoaster of a story that was DiDomenico's season came to a disappointing end at the hands of the Moncton Wildcats. The Voltiguers, who were looking unbeatable heading into the playoffs, went down in five games to the eventual champs. DiDomenico had 5 points in that series for a total of 21 points in 14 games. Those impressive numbers put him in a tie for 8th place in Q playoff scoring, with most players ahead of him playing an extra 7 games. He'll be in the AHL next season, and I don't think I'm alone in being excited to see him in training camp.

So Moncton and Windsor will represent the QMJHL and OHL, respectively, in the Memorial Cup. From the WHL, it's league champions Calgary and host team Brandon carrying the torch. It's always tough to tell how these teams will fare against each other, coming from different leagues and playing different styles. One thing is certain; prospect porn. Taylor Hall and Cam Fowler of Windsor, and Brandon Gormley of Moncton will all be top picks in this year's draft. Brandon's Brayden Schenn and Scott Glennie were both chosen in the top-10 last year. Brandon Kozun has torn up the WHL in scoring the past couple of seasons. It all makes for great hockey, and in such a short tournament, great drama. Windsor opens against Brandon on Friday night, and Calgary plays Moncton on Saturday afternoon. Check out the full schedule and take in some of the action. Also, you can follow me on Twitter.