No Habs No! - Claude Giroux

Share All sharing options for: No Habs No! - Claude Giroux

Claude Giroux's opener (and eventual game-winner) was notable for more than his quick change of pace and beauty finish. It also gave us the opportunity to laugh at Josh Gorges' wardrobe malfunction as he struggled with the strap on his skate guard.

Now, if you've ever heard Claude Giroux speak then you'd understand why someone would think he was from Quebec. Turns out, he's from Hearst, Ontario which is one of those Northern Ontario towns that are more French than English. Naturally, I had assumed that he was a Quebec-born Habs fan. Having put together some clues I came to a different conclusion. Oh, and did you know Montreal drafted some Minnesota high schooler at 20th overall instead of Giroux who went to Philly at 22? Hilarious.

Letter and translation after the jump: 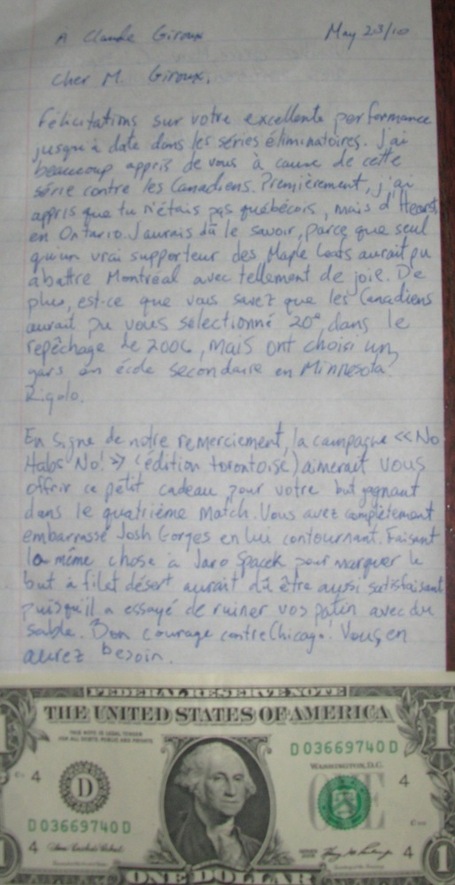 Congratulations on your excellent playoffs this Spring. I learned a lot about you because of this series against the hated Montreal Canadiens. First, I learned that you're not from Quebec but from Hearst, ON. I should have known because only a born and bred Leafs fan could destroy the Habs with such glee. Also, did you know that the Canadiens could have drafted you in 2006 20th overall but instead they picked some defenceman from a high school in Minnesota? I know, hilarious.

Anyway, I wanted to send you this token of appreciation from the No Habs No! campaign (Toronto Edition) for your game winning goal in game three. You certainly made Josh Gorges look foolish as you blew past him on your first goal. Doing the same to Jaro Spacek for your empty-netter must have been nice after they tried to ruin your skates with sand. Best of luck against Chicago. You are going to need it.