Share All sharing options for: Fun With Rivals Part Three

Our long national nightmare is finally over. One Canadian team fell in every round to vastly superior opposition and now all that is left is to watch Toronto take ownership of the longest Cup drought in the NHL. Of course, we can ignore the fact that the Los Angeles Kings and St. Louis Blues both joined the NHL in the 1967-68 season and have never won a Cup. Any way you slice it, 43 years is a long time...but so is 17 so in that vein let's take a second to remember the Montreal Canadiens' season.

The moral of the series is that the more things change, the more they stay the same:

Hate to admit it but maybe Brière was right. For the second time in 3 years the flyers take out the Habs in 5. :(

Briere was right because he knew better than Kunitz or Mike Green - who both plopped their feet into their underachieving mouths - what it would take to beat the Montreal Canadiens: force them to do something. It's no surprise that when they were finally forced to create or carry the play that they were found to be completely lost. Not to mention that it was tough for them to finally face a defenceman that can actually play physical defence in Chris Pronger. 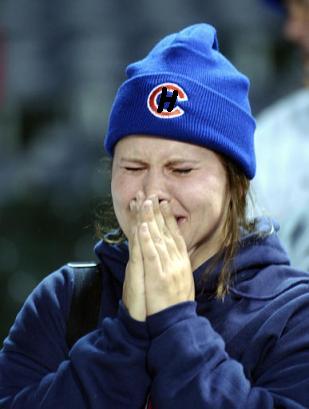 This may only make MF37 laugh

The reactions of Habs fans is split between those ready to pounce on the very players that got there this far (Lady Luck was in line for a Conn Smythe nomination) and blind optimism for next season:

New NHL commercial... WHAT IF.... Halak didn't screw up and charge out of his net in the first period?

What the hell was Halak doing so far out of the net?

he deserved to get plowed over and scored on for that.

Ah yes, who could forget how Habs fans went from "Jesus Price!" to "Jesus! Price!"? Although, he's probably well on his way out of town. 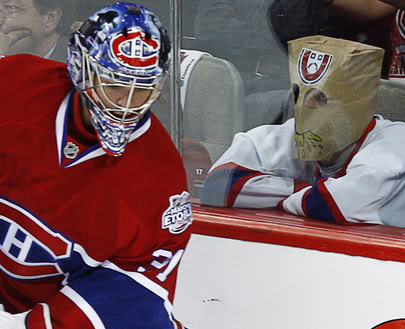 Funnily enough, the turn began two years ago when, just like this year, a young Habs goalie that had been playing pretty well fell apart in five games against the Philadelphia Flyers. This year it was Jaroslav Halak's turn as his save percentage fell from lofty, almost god-like heights to a Toskala-esque .876 in five games against the Flyers. Maybe the solution to the Halak Enigma really was to shoot less often. What other players are getting the tough treatment?

Plekanec , hope ur not coming back next year.

Don't worry, thanks to Bob Gainey's brilliant cap management there is little chance that Tomas Plekanec returns to Montreal. The 26th highest scorer this past season will probably want a raise over his $2.8M salary leaving little money for a club that has 14 players signed taking up all but $12M of the team's cap space. Then again, maybe a guy that only picked up four assists in the team's last 13 playoff games isn't the kind of guy that you build around. Actually, that sounds about right. 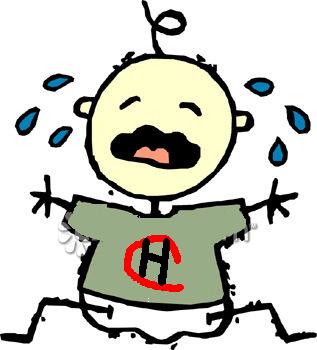 Plekanec wants to get paid

Well, he DID get 12 assists during the playoffs. Of course, for $7,357,143 for the next four seasons fans might expect a little bit more than two goals including a 17 game goalless streak. 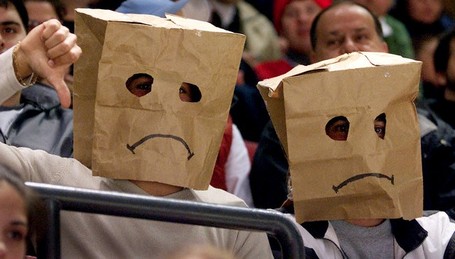 One guy that got a lot of play from the media was rookie P.K.Subban. His needless dekes, youthful enthusiasm, and seeming obliviousness to the pressures of playoff hockey endeared him to the Habs' mob. Of course, he might have done better to not tempt the hockey gods:

His series against Philadelphia featured one brutal game (the first where he was in on almost every Flyers goal), one great one (the only good one Montreal had), and three games that belied his inexperience as he made numerous errors including a few that ended up in his own net. Right now, he looks more like a young Joe Corvo than the second coming of one of Montreal's Big Three. But at least he has some fans: 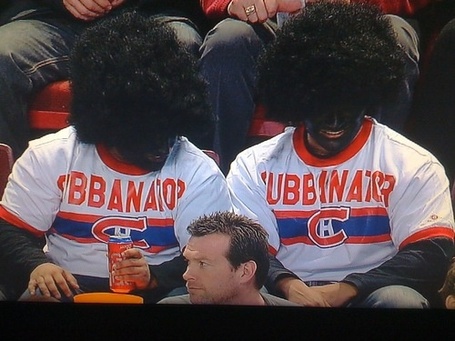 It's ok because we're not white!

Local curmudgeon Jack Todd was not impressed with the Eastern Conference Final:

Through the first four games, the most compelling narrative by far has been the saga of Pat Hickey's Honda Accord, vandalized in Philadelphia even as it nears the 600,000-kilometre mark – presumably by one of those orange-shirted orangutans you see banging on the glass at the Wachovia Centre.

Well, at least Subban's not the target this time but if he's looking for sub-human fans...well, ok, normally you'd go to Philadelphia but this time his own backyard had stood up pretty well in the competition.

People saying habs fans are not being classy baffles me. All I have seen so far is class from all fans.

Of course, compared to the classy Habs fans above how could any fanbase ever hope to match up? I mean, it's not like Habs fans ever do anything that could be considered to lack class: 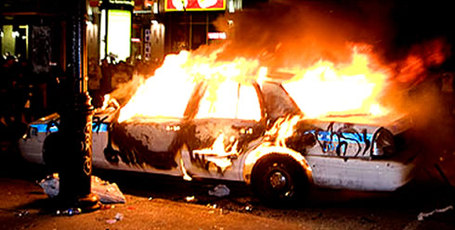 But we should always keep in mind that those people causing problems were NOT Habs fans: 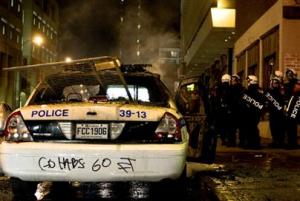 Can Habs fans just admit that Philadelphia using your own song to mock you is pretty funny? Pretend that the Leafs had a stupid song...that the fans sing...wouldn't you guys do the same thing? Of course you would.

But what about those optimistic fans? Well, this cartoon sums up what we in Toronto have had to deal with during this miracle run: 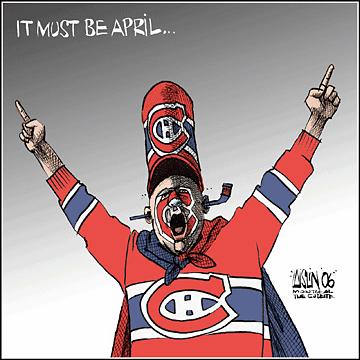 Thanks for these exciting playoffs, #Habs. You've done damn well, be proud! Way to go, and see you next season! That'll be the one!

booo habs ! next year better be the year

Well Flyers were the best team this time around........good job by the Habs...they knocked Penquins out so that was an accomblishment.

We just let the Flyers win because we're gonna crush everyone next season. See you next year Habs. - melanita911

I'm of two minds. 1: Proud of the #Canadiens for overachieving. 2: Confused at the lack of focus, organization and energy tonight.

The run of the mill bandwagoners are only frustrating in short bursts. They disappear as quickly as they appear and reminding them that their team failed is always fun. Sure, they'll come back with "at least we made the playoffs!" or "1967!". This is where you use your superior knowledge of the salary cap as well as your better looks to shame them into admitting defeat.

The last comment comes from the most insidious sort of Habs fan: the turncoat. I know, from secret sources, that this fellow is a born and bred Leafs fan from Scarborough. What changed him? "13 years in Montreal". Well, knowing when he likely graduated from my high school that clown betrayed his team when they were in the ascendancy! What kind of moron sells their values and heritage when they are on top? Well, take a good look at him because here's the first documented case. 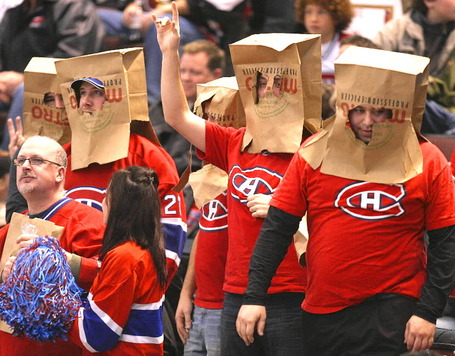 So another season ends for the Habs without a Cup as they officially end their first decade of existence without a Stanley Cup. Ken Dryden, during the Habs' centennial, noted that the fans still live in the first 100 years of the team's existence especially the 40s-70s. Weird because I've never noticed that. He also pointed out that current players need to forget the first 100 years and start writing their own script for the next 100. Personally, I think they've got a blockbuster on their hands. But this guy might disagree: 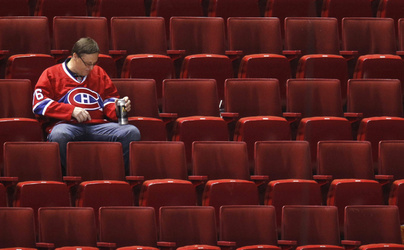 Actually, the season doesn't end for all of the Montreal players.

Habs out. Subban, Pyatt, Maxwell eligible to return to Hamilton.

Geez, this just seems like piling on now. Anyway, there's only one way to end a Habs season and that's with a song:

Late Chemmy addition: This is awesome because it confirms our hopes and dreams; that Montreal will take a miracle run as evidence that their team is built well and is now a force in the East:

Expectations should now be higher – no more praying for 8th place. - Cowhide and Rubber

Remember that Montreal hasn't beaten the Leafs in regulation since April of 2009.