Editor's Note: Daoust has returned with one of the greatest draft tools you will ever lay your eyes upon.

That’s right, the Daoust Draft Database and Analysis Machine is back, updated with this year’s stats and with some new bells and whistles. I had hoped to do a bit more of an overhaul than I did here, but life didn’t afford me as much free time to work on it as I would have liked. (And Hockey-Reference changed the format of their draft stats - eliminating player position - so I spent way more time than I wanted to just mapping the updated data over to the format I already had in place). But enough of my yakking... on to some mildly insightful and inflammatory observations, and this year’s draft database... if you’re a draft / data nerd like me, I think you’ll like it.

Before we get to it.... here's the link to the updated excel database. Enjoy. (And if you’re new to these parts, here’s last year’s offering.)

Ok, full disclosure – I don’t actually believe what I wrote in the title. The stats point to Chicago being average to above average at drafting over the last 5-7 years (with their stats obviously helped by top 3 gifts Kane and Toews). I just thought it was a good title since chirping the wings successfully got some attention last year. 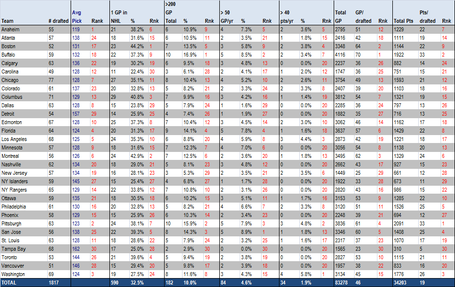 Outside of the obvious draft success of Toews and Kane, people point to the success of the likes of Keith, Seabrook, Bolland, Brouwer, Byfuglien, etc as further evidence of the Hawks awesome drafting prowess. Here is the full list of players Chicago drafted from 2001 to 2007. Feel free to disagree, but as opposed to consistent draft expertise, I see pretty ‘normal’ draft success... one or two decent players every year, a gem or two, then two stud top 5 picks that make all their draft stats look even better. 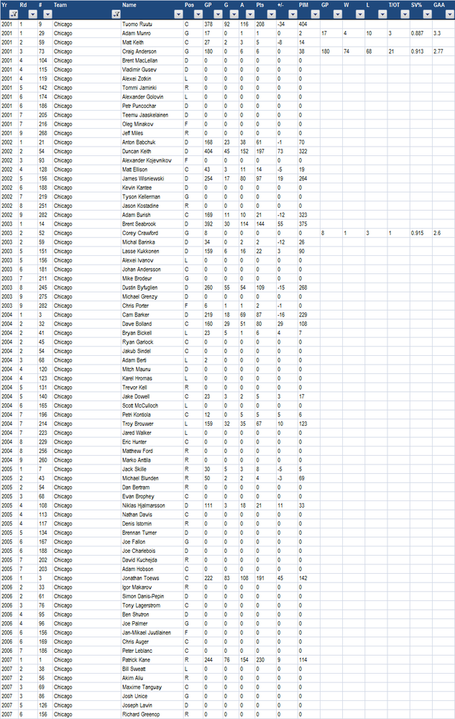 And just how big was it for Chicago to win the draft lottery to get Pat Kane in 2007? Let’s see:

So they got Patrick Kane and his 88 pts this year for $3.5M or so this year, instead of Karl Alzner who might not have even cracked their lineup, or maybe Sam Gagner or Jakub Voracek. I’m going to go way out on a limb and say that the Hawks would have been a good team, but not quite the powerhouse they were this year without Kane. Also, it’s a tremendous burn on Philly to lose the 1st overall pick only to have him come back 3 years later and score the cup-winning goal against them. Tremendous.

Enough about the Hawks though - let’s talk Leafs now. So of course the (incessant) chatter at this year’s draft will be all about the 2nd overall pick the Leafs gave up to get Phil Kessel. We all know the 2nd pick will end up being one of Taylor Hall or Tyler Seguin, but what have 2nd round picks looked like the last 15 or so years?

Damn it... that’s actually a pretty good group of players. Any way you slice it, it looks like the Bruins are going to get a solid player with that pick.

So what exactly did the Leafs get in return? Here are the top 10 goal-scorers of Kessel’s draft year (2006). You may recognize the name at #1 (note: the "Rank by draft Year" is a new feature in this year's database)... 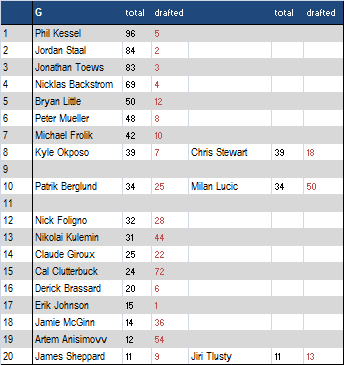 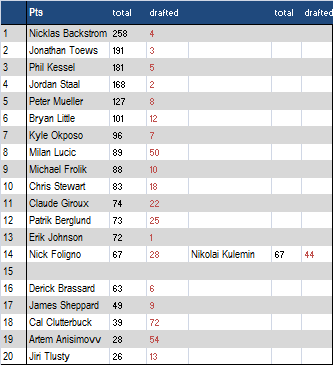 So for a 2nd overall pick, the Leafs got the top goal scorer and 3rd overall point-getter from the 2006 draft. And he’s 22 years old. You can argue that the timing of the trade was questionable (was there really a rush to get a young goal-scorer now? Maybe we could have waited 3 years, even if Brian Burke and his 5-year contract certainly couldn't?), but there is no denying that Kessel is an elite player and one of the best of his draft class.

The Leafs are without a pick in the first two rounds of this year’s draft, meaning they won’t be picking until the 62nd slot (by my math). Here’s what a 62nd overall pick could look like ....

Hmmm.... not so good. How about Leafs 3rd round prowess in general?

Feck, no better. How about the best of all the 3rd round picks of the last 16 years (based on pts scored per year since they were drafted)...

Ok, slightly more promising. Seeing as our scouts are going to have 2 rounds to reflect on their pick, hopefully they come up with a good one.

And if you're curious as to what the future might hold for either Hall or Seguin, here's Boston’s first round draft pick success...

Pretty mediocre list. Judging by their previous top 5 picks (Thornton and Kessel), there’s a pretty good chance this year’s 2nd overall pick will a) be pretty successful and b) not play for Boston all that long. Screw you Bruins.

OK, that’s all I’ve got time for right now. Take some time to F around with the database if you're so inclined, and enjoy the draft Friday.