From Beauchemin to Stalberg, we're taking a look at and grading (please read the criteria below) the 2009-10 season for every player who laced 'em up for the Maple Leafs for a significant number of games during the campaign, with an eye towards 2010-11. That means only guys that are still property of the Maple Leafs. We're doing this in concert with Maple Leafs Hot Stove. Next up, Luke Schenn.

People will point to the Calder worthy performance of Tyler Myers, or the Norris worthy performance of Drew Doughty and then say that Schenn had a terrible season; a sophomore slump if you will. Those people are dead wrong. Doughty is among the elite of the elite defensemen in the game, and Tyler Myers benefited from being on a Sabres team with terrible defense while playing in front of the game's best goal in Ryan Miller. Schenn, on the other hand, played on a team with proven veteran defensemen like Beauchemin, Phaneuf, and Kaberle. Another thing to note is that Schenn was never touted as a point producing blue liner; his game is out of a shut down style of play against tough competition. Myers led his team with nearly 3 minutes of PP time a game; Schenn averaged 14 seconds.

In my and many others opinion, Luke Schenn was brought up to the NHL at a far too early age. He should have played another year in the WHL before playing for the Toronto Marlies this past season. Far too often in the Maple Leaf's past they have hurried youngsters and ultimately missed out on their potential. This is now even more a risk in the salary cap era as now two years have been wasted on Schenn's ELC, bringing ever closer to the eligibility for dreaded free agency.

Schenn is just now starting to show the skill that warranted his high selection back in 2008 just like other draft picks from that year such as John Carlson, Alex Pietrangelo, and Colin Wilson. Normal prospects take time to mature before being thrown to the wolves of the NHL, fortunately it looks like Schenn, despite all the mistakes made with him thus far, is still going to develop into a great player.

Please read the whole article before you vote. I'll know if you didn't.

79 games played; 5 goals; 12 assists; 50 PIM. The list of 20 year old defensemen who can play that many games at the highest level and put up those numbers is a very very short one. While Schenn's offensive game was originally just an afterthought; his two goal performa nce against Ottawa back in February showed that he has developed his shot into a weapon to be feared. Seriously what a blast. Also of note is the 50 PIM, down from 71 PIM in 9 fewer games from last year. This helps to shed light on the fact that he is becoming a smarter defensemen who is not caught out of position as frequently as he once was.

If I were to take a veteran player in the NHL right now, and compare them to Luke Schenn in terms of style of play, development, production, and potential that player would be Ryan Suter. Both were high draft pick defensive defensemen. They are roughly the same size and shape. Both come from hockey pedigree families. And their numbers after their first two seasons are nearly identical (Note: At the time Suter played for a 100 point Nashville team) One important difference however is that Suter was 20 at the time of his NHL season, and Schenn was only 18. Suter was an Olympic silver medalist for the United States this year. I'm just saying give Schenn some time to full develop and mature before you pass judgement on him.

While modeled as a hard minutes, shut down defensemen Schenn played the least amount of minutes among the regular Leafs defensemen, and did so against the weakest opposition. Now this can attributed to both the logjam of veteran defensemen ahead of him, and to the emergence of Carl Gunnarsson as a legit NHLer. (Please make note that Gunnarsson was a rookie at the age of 23 this year. Just saying...) But really I don't believe giving your 20 year old blue chip defensive prospect sheltered minutes is a bad thing, in fact I think it's the right thing to do. Remember, if it were up to me, he'd have been playing on the Marlies. 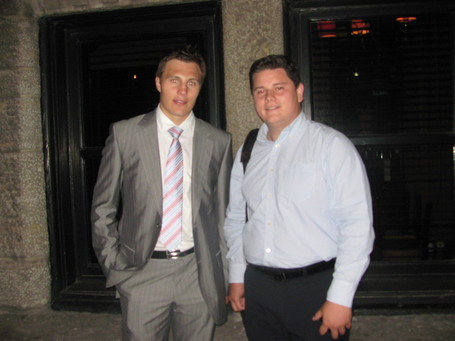 Seriously, this was the worst picture of Schenn I could find on the Internet. (Not pictured: Dave Nonis)

Some say sophomore slump. Some say draft bust. I say future organizational cornerstone. I've laid out the facts, stats, and some opinion. What do you say?