What was the Greatest Draft in NHL History?

Share All sharing options for: What was the Greatest Draft in NHL History?

One of the reasons why I was ok with the trade for Phil Kessel (giving up two 1st round picks and a 2nd) at the time it was made was that all the professionals were saying that this year would be a weak draft. Outside of the big two of Hall and Seguin, there are some other good players but nobody that screams out future Hall of Famer. (Insert Dino Ciccarelli joke here) Everyone always praises the 2003 Draft as being one for the ages with 29 out of the 30 players selected in the first round going on to play in the NHL. (Sucks for you Hugh Jessiman)

All this got me thinking: what was the greatest draft in NHL history? How could such a statement be quantified? There are so many stats and intangibles that go in to calling someone a great hockey player let alone an entire draft class. Therefore I decided that simple was the best way to go and I decided to rank drafts by overall per game statistics of those players that reached the NHL.  Now there is further analysis to be done in terms of what percentage of players from a specific draft even went on to play in the NHL and so forth but I haven't the time and frankly I feel that by looking at how well the players from those drafts did in the NHL is a pretty good criterion for judging their draft year as a whole.

The way I set about doing this was to download data from www.hockeydb.com which thankfully lets you sort by draft year and gives you all the meaningful stats; games played, goals, assists, points, and PIM.  I then decided to only cover the NHL Amateur and Entry drafts of the NHL and not the WHA; no expansion drafts, no supplemental drafts. From there it was a lot of Excel work to get the data into a manageable format.  I decided to remove goalies from this study because they would skew the per game statistics as the rarely score points. So for this study it's just skaters that are covered.

Without further ado here are the results of my study:

Discussion after the jump.

So which draft was the greatest?

After going over all the number and taking things into consideration like draft size, years available to the NHL, total games played, and draft depth; to me it looks like 1979 was the best draft ever. Sure it doesn't rank #1 in goals per game, assists per game, or points per game, but take a look at the overall number of games played at the pace at which points were put up!

Well that answers the question of which draft year was "The Greatest" but there is a lot more to be learned from all this data.  Such as, which year had the most truculent players? Well that'd be 1982 who averaged 1.299 PIM per game led by Pat Verbeek, Scott Stevens, Ken Daneyko, and ultra goon Ulf Samuelsson; all with over 2,400 career penalty minutes. Though 1983 is nipping at their heels with more total PIM led by Bob "Got my blood punched out" Probert and his 3,300 career PIM, good for 5th all-time.

Also, what about trends over the year? Surely players aren't putting up 100 points season with regularity like they once were, and they aren't.  The graph below shows the PPG trend for each draft year. 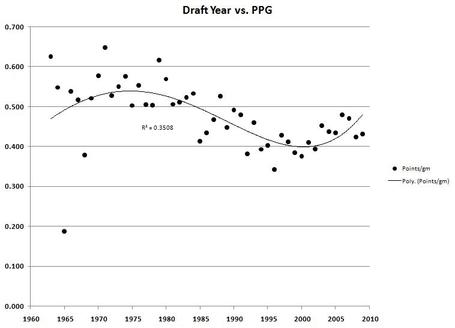 As you can see, overall scoring has significantly decreased over time.  This is probably best attributed to the fact that NHL goalies are far better than they once were and have been improving over time for quite awhile.

The increase in scoring at the very end (2004 onward) can be attributed to the small number of players from those drafts that have so far made it to the NHL and the fact that those players who have made it to the NHL represent the best of their class (ie. Alex Ovechkin, Sidney Crosby, John Tavares, Jonathan Toews, Patrick Kane). Though the upswing for 2003 is legitimate as those players have fully populated the NHL to the extent that they will produce and are producing at a great pace. Definitely the best draft class of the 2000s thusfar.

Ok, so that's what scoring over time has been like but what about truculence? I'm glad you asked: 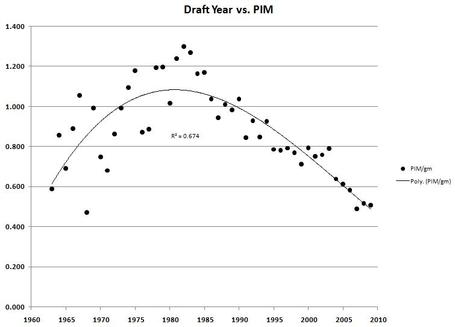 Look no further for proof of the wimpification of hockey. Kids just aren't as mean as they once were. It's a shame really.

Well that's all I've got. Feel free to sort through the documents and add your own observations.