The Toronto Maple Leafs selected Greg McKegg of the Erie Otters with the 62nd pick in the 2010 NHL Entry Draft. This was the team's first proprietary pick of the draft and many here had hoped that the Leafs would select Kirill Kabanov. Instead, the team seems to once again have chosen a safer player in line with MF37's strategy rather than rolling the dice like Chemmy and I (among many) wanted to see. 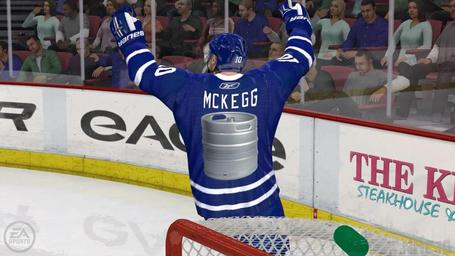 McKegg is being compared to a player like Ryan O'Reilly who was underrated in his draft class but has go on to be a contributor in his first year on the Colorado Avalanche. While Brian Burke did not select a guy like Kabanov that could be seen as 'pure skill' he did choose another player that will be counted on to contribute offence if he develops into an NHLer. This is a far cry from last year's Jamie Devane third round pick to say the least.

More scouting reports after the jump but first, some eye candy:

Greg McKegg was identified as one of the ISS's biggest risers prior to the draft. He made big strides in his all-around game this season, his second in the OHL with Erie, and his +/- jumped almost 30 on a team that was close to even. Looking at birthdays, the most enticing aspect of McKegg is that he just turned 18 last week making him one of the youngest players in the draft. Anyone that is familiar with Gabe Desjardins' work in developing equivalencies knows that when evaluating how a player will develop their age plays a big part. It's intuitive but also borne out by the numbers: more points at a younger age is better.

He has a good pedigree as well. He was selected 2nd in the year that Tyler Seguin went 9th in the OHL Draft and he finished 11th in OHL scoring. His selection is also in line with what was projected by the scouting services:

In 2009, a lot of people underestimated the draft-eligible Ryan O'Reilly. He played on the Erie Otters, a low-profile team. But he went on to stick in the NHL as an 18-year-old for the Colorado Avalanche and make some pundits and scouts look a bit foolish.

A very similar thing seems to be happening again this year, this time with goal scorer Greg McKegg. He has 30 goals and 37 assists in 56 games, but he's not well known and not considered a top prospect for the 2010 draft. He's rated just 94th among North American Skaters by Central Scouting, and to add insult to injury, his name was spelled wrong on the list.

Erie Otters head coach Robbie Ftorek - "Greg is a skilled goal scorer who dishes the puck well. He knows the game at both ends of the ice."

After struggling in his first season to the tune of 8-10-18 in 64 games and having his ice time limited to "three or four shifts a game," McKegg credits an increase in confidence and chemistry with his older linemates Zack Torquato (31-62-93, +21) and Mike Cazzola (36-50-86, +22) for his improved play, despite suffering a knee injury in training camp that hampered his skating all season. McKegg works with skating coach Dwayne Blais in the off-season, and hopes to get his skating ability back to where it was during training camp before his injury in time for next season.