Jason Deforest from the Fan960 in Calgary, AB earlier today tweeted that Gary Bettman made $7.23M as NHL commissioner last year. Ugh is right. That immediately seemed like a large amount of cash compared to what most NHL players make. So that got the ol' hamster wheel spinning and I decided to compare Bettman's salary to that of the commissioner of the other Big Four leagues; Goodell with the NFL, Selig with MLB, and Stern with the NBA.

First let's compare commissioner salaries to the highest paid players in their leagues:

Players making more than the Commissioner per league:

So when you look at the high end salaries, the NHL along with the MLB seems to pay their top players less in comparison to their commissioners than do the NFL and NBA. That sucks if you're just below top tier talent, like say a Patrick Marleau.

But what about the average player salary for each league? Head over the jump to find that out, plus a lot more.

Sweet Jesus are players in the NFL getting hosed. Granted being on the punt return team for only 16 games a season really isn't worth a lot, especially considering that NFL teams are allowed up to 53 players.  In this light, Bettman looks to be only slighly overpaid. But again there is a large difference in players per team between the league, so perhaps we should compare the commissioners salary to the average salary of the teams in their leagues:

Note: These are average salaries, not caphits, and are merely estimates.

Well when you look at it that way, Bettman doesn't seem to be overpaid at all when compared to team salaries.  One last thing to compare would be a commissioner's salary versus their league's revenue. So let's do that:

Will somebody please give Roger Goodell a raise?!?! Using this metric, it appears as though Gary Bettman is in fact paid proportionately correct compared to the revenue of his league. 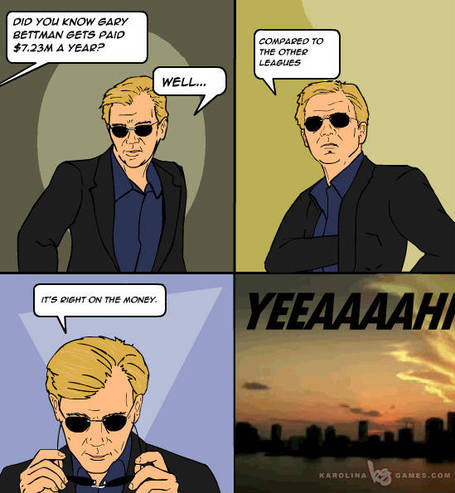