You Down With O-Pee-Chee?

Share All sharing options for: You Down With O-Pee-Chee?

Ya you know me! As I kid I used to collect sports cards; like a lot of sports cards. I had binders and binders full of 'em. My prized possession was an autographed Teemu Selanne rookie card that I mailed to Winnipeg to have him sign. It was pretty sweet. Back then if you wanted to collect hockey cards, there was only one true brand: O-Pee-Chee.  As I grew older I stop collecting cards and eventually sold off my collection. I don't collect them anymore, but there is still something cool about hockey cards.

I play hockey in a mens league in Stamford, Connecticut. At the rink there is an arcade and in the arcade there is an old timey sports card vending machine. For some reason, after my game on Tuesday night I decided to have a looksee at the cards on sale. I was amazed at what I found. Among the 2009 Upper Decks and Topps packs, there was an entire row of 1991-1992 O-Pee-Chee hockey card packs! Wow is right. I bought a pack then and there and thought it'd be fun to show you all what was inside. Here....we....go. 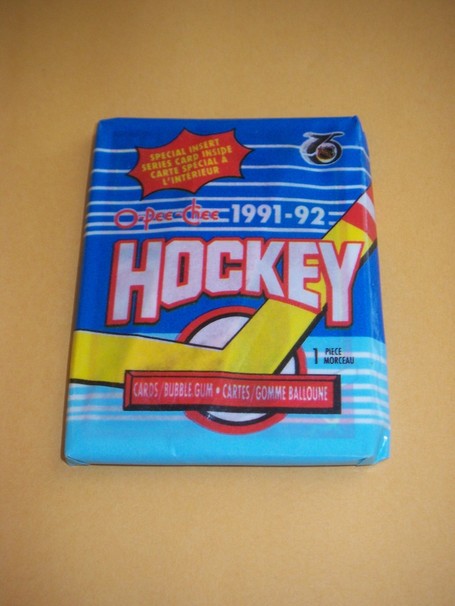 Follow me after the jump for the contents of this pack. Your Friday links can be found all the way at the bottom.

So first off, did you catch that the pack came with a piece of gum? 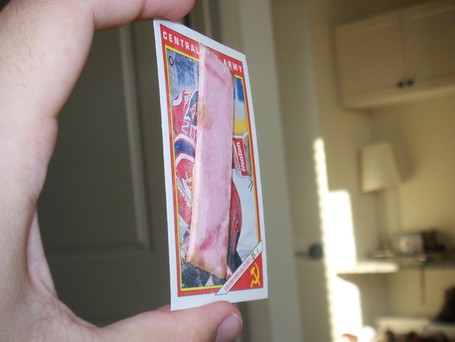 Yeah, I'm not going to even try and chew that. And the card on which that piece of gum is permanently bonded? Why that would be Maxim Mikhailovsky of the Soviet Central Red Army team. On the back of the card are his Soviets vs. NHL stats; 7 GP with 21 GA. He's since been inducted into the Russian Hockey Hall of Fame.

Next up I found not one, but two Eddie Belfour cards; though neither of them were his actual hockey card. One was celebrating his 1990-1991 league leading wins tally (43) and the other his league leading save percentage (.910): 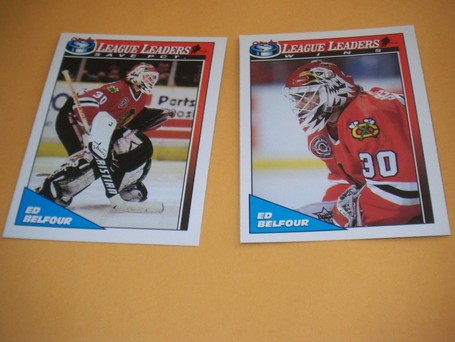 The next card in the pack was the biggest bust of the 1989 NHL Entry Draft, Dave Chyzowski. Selected 2nd overall behind the greatest Maple Leaf of all time, Mats Sundin, Chyzowski went on to play in 116 NHL games and scored a grand total of 31 points; 28 of which were in the two years represented on this card. Ouch! 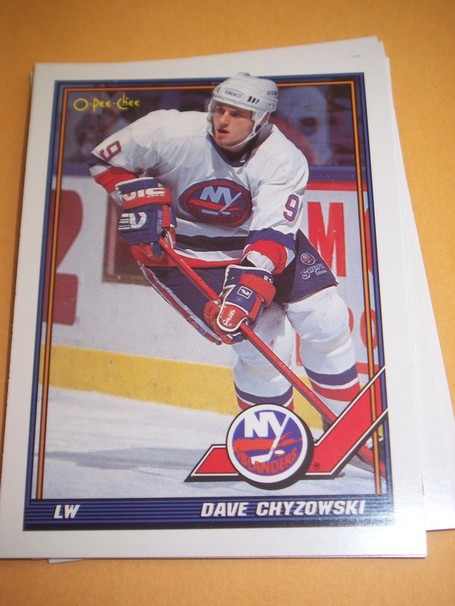 Next we have NHL journeyman Tony McKegney, at the time of the Chicago Blackhawks. Tony played over 900 games in the NHL for 7 teams. The last 9 games of his NHL career were spent playing with Chicago, making this the last NHL card he ever appeared on. Neat! 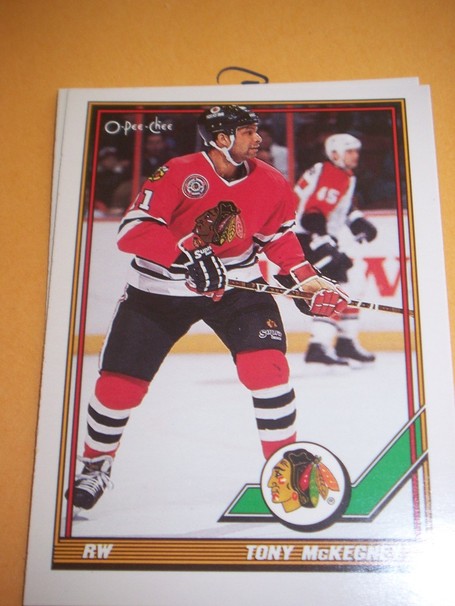 The next card is for a player I'm sure you're all familiar with; Uwe Krupp, here playing for the Sabres. Uwe was, at the time, only the second German to have a lengthy career in the NHL and still is the only German to have his name engraved on Lord Stanley's Cup. He scored the cup clinging goal for the Avalanche in triple overtime back in 1996 and later won with Detroit in 2002, though he didn't get his name engraved on it due to an injury. 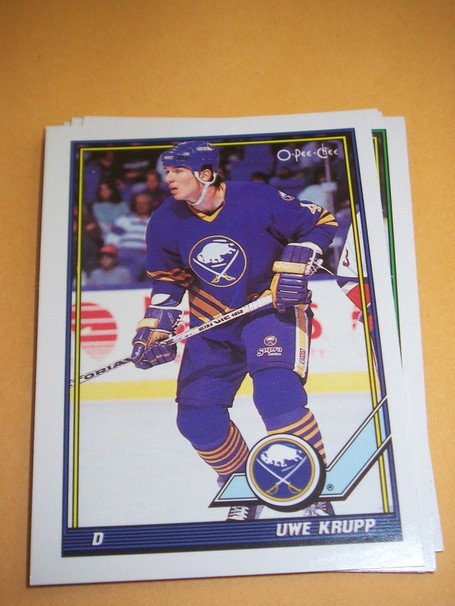 To finish off the pack in style, I found a trio of amazing Minnesota North Stars players; including two former 1st overall draft selections.  First up is fan favorite Neal Broten. Neal was a part of The Miracle on Ice; won the Hobey Baker; and won the Cup in 95 with the Devils. Also, he just straight ruled. 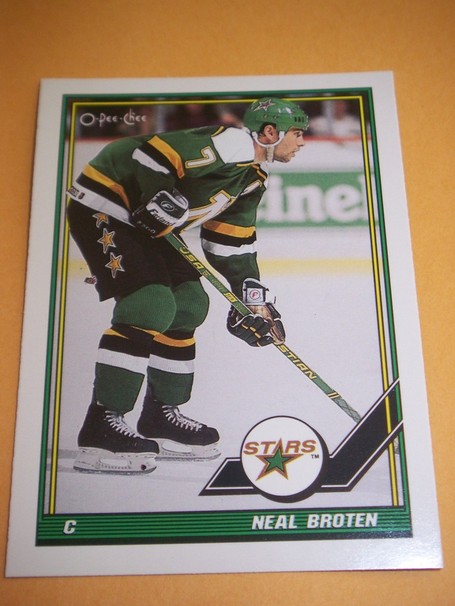 Following Neal's card was that of the 1st overall selection of the 1978 NHL Amateur Draft, Bobby Smith. Bobby Smith, if you didn't know, was an amazing player back in the day. The man beat Wayne Freakin Gretzky for the OMJHL scoring title in 1977-78 with 192 points; a record that still stands to this day. He won the Calder as Rookie of the Year in 1979 and later won a cup with Montreal in 1986. 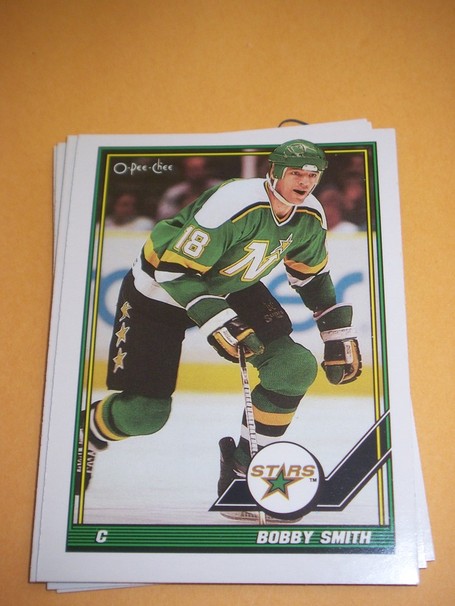 The last card in the pack was that of a Minnesota North Star who had yet to play a single game on that team, yet who had played a lot of game for the Toronto Maple Leafs. 1st overall pick; Leaf and North Star; 1991......who else could it be other than former Leafs captain Rob Ramage. Rob was claimed by Minnesota from the Leafs in the 1991 NHL Expansion draft 2nd overall behind Jeff Hackett. What is funny about the card is that the cards were most likely printed up in the summer so that the stats were up to date, but since Ramage had yet to play for the North Stars he appears on the card in a Leafs uniform with the notation that he is now with Minnesota. 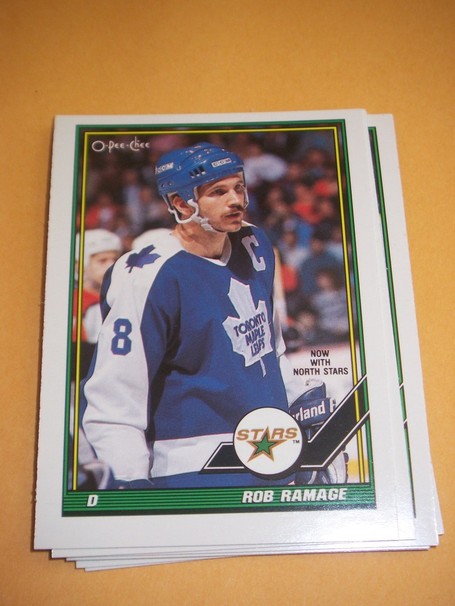 Now for some links!

Butterflies and Black Aces with an amazing post that is a must read.

Replacement level goaltenders in the NHL

Behind the Net shows us another reason why Vesa Toskala sucks giant donkey balls.

Since when has Brian Burke listened to logic?

If the Leafs want success this coming season,

VLM says look no further than the Nashville Predators.

Who's the best fighter in the league?

LeafsHQ with a thorough breakdown on hockey's top pugilists.

What to excpect with Colby Armstrong

MLHS gives us the future 411 on Armdog.

It's an opportune time for the young Leafs

maplestirup sees that it's prime time for the youngens to get their shot.