Now often times around here you'll here Pension Plan Puppets referred to by its full legal name PPP Amalgamated Heavy Industries and Kitten Ranch LLC. Now it's obvious what our Heavy Industries branch is, but the Kitten Ranch part of the business has been clouded in secrecy for quite some time and for a very good reason. You see, at the PPP Kitten Ranch we don't breed your everyday run of the mill tabby cats. Oh no sirree Bob. We harness the unending power of the Internet to crossbreed our kittens with IBM supercomputers to create a special brand of cyborg kittens like the one shown below: 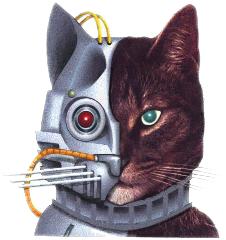 Now I know you're asking yourself, why in the hell would PPP want to create such an abomination? The answer is simple really:

We've been debating on the correct step 2 to take, and have encountered a minor setback with our cyborg kittens due to the "Kill Sarah Connor" glitch that keeps popping up from time to time. I'd tell you more, but we are currently on the receiving end of several wrongful death civil suits because of the cats and our lawyers inform me that I've said to much already. Toodles!

Links after the jump.

Homophobia and Discrimination in Hockey

The Copper and Blue wants the NHL and NHLPA to step up and bring about acceptance in the game of hockey.

Why not Canada? Why not Winnipeg? Why not Hamilton?

The Globe and Mail, along with TSN, looks at the possibilities of moving a team back North.

Lovely little tidbit in there about Toskala sucking so damn much.

A Kaberle trade would start a domino effect for the Leafs

But does that mean the signing of a vet or calling up one of the kids?

The Maple Leaf rookies have begun to skate

Hopefully they don't start an uprising a la WWE's NXTs.

This one time, at Prospect Camp, Nazem Kadri showed me his awesome dangle.

Playing the waiting game; for the Leafs and Kovalchuk

VLM passes the time recalling the bad Devils trade for Kovalchuk at the deadline.

Now tell me he doesn't look like a fatter grown up version of Fulton Reed from The Might Ducks.  (2) (3)

Lastly, I was in Toronto on Monday and saw the greatest ad and subsequent web address combination ever on the back of a city bus: www.getyourbuttseen.ca  Help spread awareness of colorectal cancer and send a butt to a friend today!

On Versteeg and Armstrong

Look at the ads on that page!