It was just a rookie tournament game but it always stinks to lose to the Ottawa Senators. Add the pre-season to the regular season to the list of unimportant seasons including the summer, fall, and winter where Ottawa finds a way to be the better team. The unfortunate part is that the Leafs had a 2-1 lead entering the third after their special teams provided a powerplay goal (what are those?) and Jerry D'Amigo's excellent penalty killing work forced a Senators' own goal. The hard work was undone by a particularly undisciplined third period.

The other Leafs that stood out for me were Ze Germans Korbinian Holzer and Marcel Mueller who had their strongest games of the tournament. Both looked much more comfortable on the smaller North American ice surface and I can't wait to see them on the Marlies. The tender, Andrew Engelage, may not have had the Memorial Cup champion Windsor Spitfires in front of him but he looked good nonetheless.

Silver Seven Sens noted that there was one flashpoint in the game:

When he left the box in the third, defenceman Eric Gryba went right at him, but Kadri wanted no part of it, so vilified forward Mike Liambas stepped in to fight Gryba. The fight seemed to energize the Senators, though, and Ottawa carried much of the play for the third.

Keeping in mind that Gryba is about 6'18" and about 60 pounds heavier than NazemKadri no one in their right mind would expect him to stand up to the hulking beast. Luckily, Michael Liambas, knowing his role, stepped in to face Gryba and didn't do a half bad job. It looked like a little bull terrier holding on to a bear for dear life.

After the jump, some pictures courtesy of KnightsFan89 and remember that if you click on any AP/Getty picture in our posts it will take you to a gallery with more pictures. 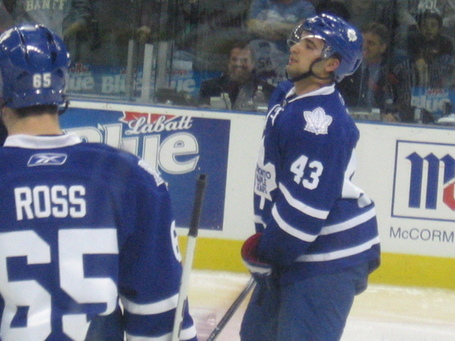 Nazem Kadri's been around too many puck bunnies 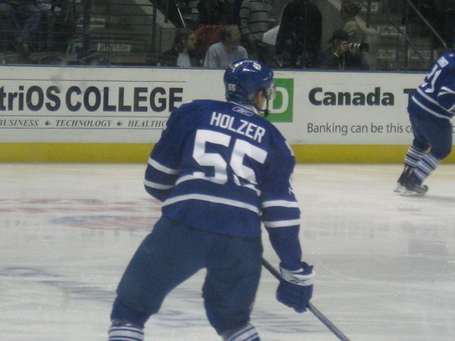 Germans were always better at offence 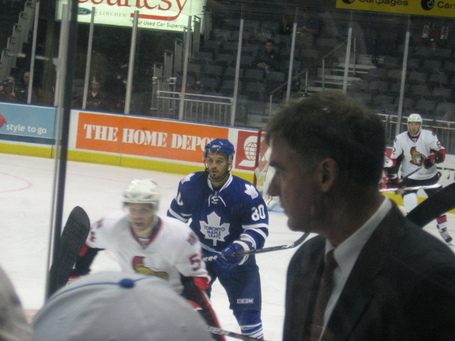 Liambas looks for his next chance to impress Burke 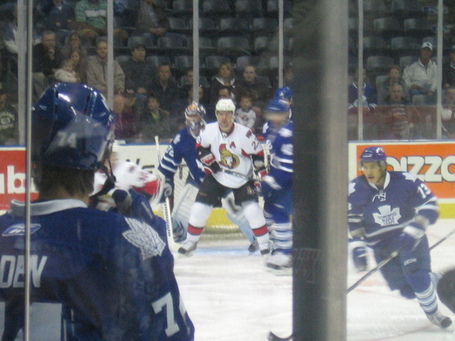 Why is that Senator still standing?