With the return of preseason hockey comes the return of the Leaf of the Day.  For the uninitiated, the Leaf of the Day (LotD) is a tribute to players who wore the blue and white with distinction - either that or crazy shots of 70s hair.  Sometimes the LotD will have some tangental connnection to current events, more often it won't.  It'll be some choice that makes an odd sort of sense, at least to me.  If, after reading it, the connection is clear to you, then I've won.

During the preseason I get to cop out and re-use some of last season's pictures.  I have a finite number of scans ready (the qualification for being the LotD is that a player must have appeared on some sort of card and I must have one of them sitting in the basement somewhere) and the re-runs let me stretch that out.

We do take requests - but if the player was LotD last year and his name is not Wendel Clark, then the answer is probably not.  Gotta be two seasons since the last time someone was LotD unless there's something compelling.  Or unless I feel like it.  Whatever comes first.  :)

Today's LotD is Denis Dupere.  Denis was a checker with good size and some wheels and clearly limited hands (though he was good on the draw).  The Leafs picked him up from the Rangers in the Tim Horton deal.

When the Leafs finally decided the time had come to move Tim, Stafford Smythe was quoted in the paper crowing about the riches that would come the Leafs' way (in terms of prospects).  That wound up being Dupere, pictured here, and Guy Trottier (depending where you read, the Trottier deal is unrelated).  Both were solid role players (Denis was my rabid-fan aunt's favourite player in the early 70s), but neither was the stud prospect the Leafs envisioned.  It's kind of a warning for those expecting a ton back for Tomas Kaberle (see - there's the tie-in).

The Leafs had a lot of young forwards coming along by '73-74 and this allowed them to leave Dupere exposed in the '74 Expansion Draft.  He went to Washington where he scored 20 goals, represented the Caps at the All-Star Game and found himself traded three weeks later to St. Louis.  From there he went to Kansas City, making him one of the few players to play for both the Caps and Scouts, which may or may not be a good thing.

In exchange for Dupere and Craig Patrick, St. Louis got Lynn Powis and a second-round pick.  They used it to draft a guy named Brian Sutter.

Visit the Denis Dupere Gallery at the HHOF.

This is what the HHOF has to say about Denis Dupere:

Denis Dupere keeps a picture of his crowning NHL moment on the wall in his kitchen. The native of Jonquiere, Quebec, in Maple Leaf blue, is seen leaping past sprawling Canadiens' netminder Rogie Vachon in celebration of his first-ever NHL goal.

Dupere made the journeyman's march to the big leagues via the Kitchener Rangers of the OHA and the Omaha Knights of the Central Hockey League. By 1970, the Leafs acquired the weighty winger for third- and fourth-line duty. Dupere was a defensive specialist who had a knack for winning face-offs and could effectively deceive goaltenders with his strong wrist shot off the wrong foot.

In 1974, Dupere joined the Washington Capitals where he scored twenty goals and fulfilled a dream as the Caps choice for the All-Star game. "I was shaking when I hit the ice," he recalled. "Seeing all those guys?Lafleur, Dryden, Esposito, Orr. You can't beat a thrill like that!"

Dupere's career wound down with stops in St. Louis, Kansas City and finally, in Colorado where he retired in 1978. After the NHL, Dupere played briefly in France. 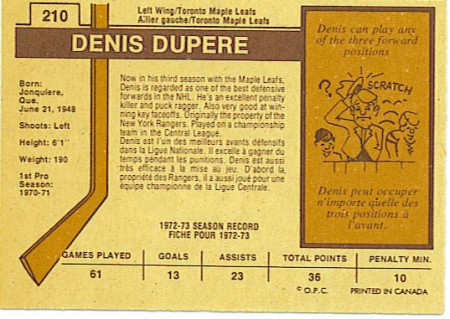