Mike Craig - as per request

Share All sharing options for: Mike Craig - as per request

Normally, if there's a player who hasn't been the Leaf of the Day for more than a year, I'll save him for the regular season.  This time, however, I have a request.  This is shocking for a couple of reasons.  The first is that I always say "we do requests," but almost nobody ever takes me up on it.  The second is that this is evidence that someone other than my immediate family actually reads these things, which always surprises me to no end.

There's always a player out there who lights up your team despite having relatively modest stats against everyone else.  Mike Craig was one of those guys.  Whenever the Leafs would play Minnesota - probably my least favourite Norris opponent - Craig looked like a budding star.  He played a tough, physical game, had a bit of an agitator in him and scored timely goals.  Reminds me of sort of a young Brenden Morrow today - the sort of player that drives you nuts while killing your team.

At the end of the year, you'd look at the stats and see he only had 15 goals and wonder how this could be possible, given that he probably had at least five of them against the Leafs.

He had a good pedigree.  He'd won a Memorial Cup with Oshawa (they had this kid named Lindros, you may have heard of him) and a pair of world junior championships.  He was a WJC all-star in '91.  Seriously - the kid looked good.

In the summer of 1994, the Leafs signed him to a big contract - four years, $2.3 million.  On the heels of the Sundin trade, this was also pretty big news.  He was only 23 years old and was seen as having a ton of potential that never got tapped in Minny.  There was talk of him becoming a 30-goal scorer in Toronto.

But there was a cost that was more than just money.  When you signed a Group I free agent in those days, compensation was handled a little differently.  There wasn't a right to match.  If the teams couldn't come to terms on a trade, then each side submitted a proposal to an arbitrator, who then had to choose between them.  The way it generally worked was that the team who had lost a player would aim high, asking for something pretty significant.  The team doing the signing had to come up with a pretty good offer, otherwise they risked losing a lot more than they bargained for.  As a result, teams that lost a player typically made out quite well.  (Note: except under Ballard.  The Leafs got hosed on compensation for Gary Nylund because Chicago completely outplayed them.  Story for another day.)

In this case, the Stars asked for top prospect Kenny Jonsson.  The Leafs countered with Grant Marshall and the ever-useful Peter Zezel.  The Leafs "won" the arbitration, and the Stars got a pair of players for a guy who in their opinion was underachieving.

Had Craig developed into that 30-goal scorer, the cost would have been completely forgotten.  The problem was that he didn't.  In lockout-shortened 1994-95, he had just 5 goals and 5 assists in 37 games.  It was like his whole game disappeared.  He wasn't scoring, he wasn't feisty.  There just wasn't a lot there.  It was as though he only could ever light it up against Toronto, and once deprived of Toronto as an opponent, he couldn't light it up against anyone.

I don't know what the real trouble was.  There were a lot of disappointments that season.  A number of the moves that were made didn't really pan out as intended and the Leafs were nowhere near as good as they'd been just a season prior.

Fletcher would go on to make a ton of trades over the next couple of seasons, looking for some magic.  Some worked, some didn't, but nothing ever lit the fire under Mike Craig.  He had seasons of eight and seven goals and was eventually let go as a free agent.  Once he left Toronto, he only played three more NHL games and eventually wound up in Europe.

Unfortunately for him, his struggles came at a time when the Fletcher-era team was slipping out of contention.  Fairly or unfairly, he ended up being emblematic of everything that went wrong and took no small amount of abuse because of it. Mike didn't get the full Larry Murphy treatment, but it couldn't have been fun.

In terms of the players the Leafs gave up, I think that they really didn't lose out that badly.  Zezel was clearly on the downside and missed a lot of time over the seasons he had left.  Marshall was an energy guy and checker and there are any number of those out there.  The loss of Zezel really hurt only because he was good in the circle and he was popular.

For a young guy with upside, it's the kind of chance you take.  Signing Mike Craig was a bold move, almost as bold as the Sundin trade.  It just didn't work.

Link to the Mike Craig Gallery at the HHOF.

This is what the HHOF has to say about Mike Craig:

Mike Craig had a solid junior career with the OHL's Oshawa Generals and he also represented Canada at the World Junior Hockey Championships. The Minnesota North Stars felt they were getting a steal in 1989 when they made Craig the 28th selection in the second round of the NHL Entry Draft.

Craig was always a gifted scorer as a youth and secured a full-time roster spot with the Generals as a 16-year-old. In his draft year, he had 36 goals and 36 assists for 72 points. His rugged style of play was also deemed a positive for the fast and rough NHL. In 1989-90, Craig averaged nearly a goal a game in junior, while suiting up for just 43 games. He finished with 36 goals and 76 points. Craig, along with 16-year-old phenom Eric Lindros, led the Generals to a Memorial Cup championship that spring in Hamilton.

In his NHL rookie season Crag appeared in 39 games for the North Stars, scoring eight goals and 12 points. He was also a solid playoff contributor as the Stars advanced to the Stanley Cup finals before losing to the Pittsburgh Penguins.

The following two seasons produced 15-goal seasons, which was slightly lower than the expectations of the North Stars' hierarchy. In 1993-94, Craig moved with the franchise to Dallas, where they were renamed the Stars. Once again, he had a disappointing offensive season, scoring just 13 goals. For the third year in succession, though, Craig had well over 100 minutes in penalties.

At 23, Craig signed a four-year, $2.3 million contract with the Toronto Maple Leafs, who were convinced he had more offensive potential than he'd shown with the Stars' organization. Craig also made no attempt to disguise the fact that he blamed Stars coach Bob Gainey for stalling his development as a pro.

Those early predictions of greater success with Toronto turned out to be nothing more than wishful thinking. In fact, Craig failed to crack the ten-goal barrier during his three years in Toronto. Although he was liked by his teammates, Craig was cut loose by the Maple Leafs when they acquired the likes of Mike Johnson and Jason Podollan from Florida in a deal which sent Kirk Muller to the Sunshine state.

After a year toiling in the minors, Craig made an attempt at a comeback with the San Jose Sharks in 1998-99, but the experiment lasted all of one game. He continues to play in the minors with the Cleveland Barons of the AHL. 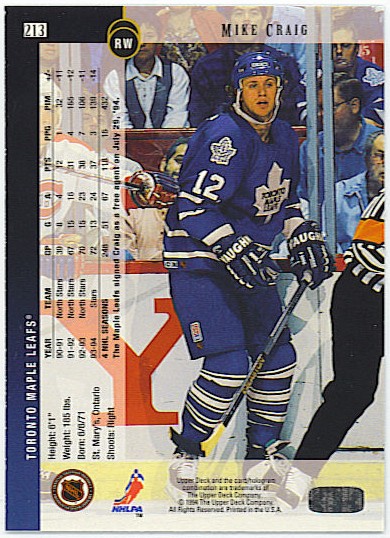