For those of you that don't know, I'm the head coach a squirt hockey team in Connecticut. We're not the greatest hockey team there is, and we may very well be the worst but the kids are coachable and you really see drastic improvement out of them over the course of a season. Coaching at a higher level is far more difficult because the players are so much better, the game so much quicker, and the opposing coaches so much smarter. As a coach, you've really got to be on your game or else it'll become very apparent that you haven't done your job right once your team hits the ice.

I like Ron Wilson as a coach, I really do, but I'm come to the conclusion that he doesn't know dick about coaching a power play.  The Leafs were dead last on the PP last year with a pitiful 14% success rate and last night continued that with a pitiful 0 for 8 showing last night; including two separate 5 on 3 situations. Now I didn't watch the whole game last night as I had my own mens league bout, but what I saw on the PP through 10 minutes into the second was just deplorable. Let me break it down for you after the jump.

I'm going to breakdown two separate power play "strategies" that I saw used by the Leafs last night, tell you why they suck, and show you how to make them work. First off, let's start with the tried and true method of setting up a blast from one of your point men. On the specific power play I'm talking about, Kaberle and Phaneuf are at the point with #15 on the right and #3 on the left. The puck moves from the winger on the half boards up to Kaberle, who then passes over to Phaneuf for the one timer that sails over the net. The players were set up as shown below: 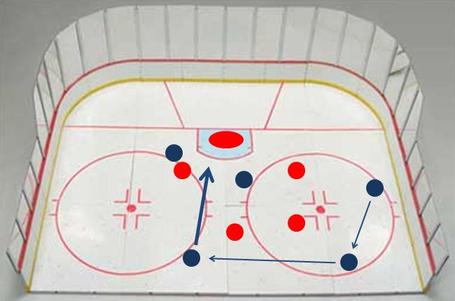 First off, Phaneuf, or whomever is taking the shot, has got to hit the net. It's a 4' by 6' box and you're a professional hockey player. Hit the damn net. At least twice last night shots from the point sailed over the net, careened off the glass, around the boards, and out of the zone. Congrats, you've just cleared the puck for the other team traitor.

Secondly, the forward in front of the net (on this play it was Armstrong) is completely out of position. When they replayed the shot with the behind the net camera,Armstrong is well off to the side with his stick on the ice looking for a tip and the Sens goalie has a completely unobstructed view of Phaneuf's shot.

Do you know why Tomas Holmstrom wears extra padded hockey pants? Because he's constantly getting hit by Lidstrom's shots from the point because his big fat butt is parked directly in front of the goalies and right in their line of sight for shots from the point. Armstrong has to forget about making a pretty tip with his stick, Phaneuf couldn't hit it anyway, and should move his large frame to just outside the crease and in front of the goalie. Deflections off of equipment for goals happen just as often as deflections off of sticks, and even if the puck gets caught in Armstrong's gear and falls at his feet, it's right in front of the goal now and just begging to be shoveled in. Wilson needs to get his forwards in front of the opposing goalies looking for body deflections and juicy rebounds to bang home either off of the goalie or themselves.

Also, with this same basic setup time and again the two defensemen would pass back and forth to one another and constantly fake shots. When that defenseman is Tomas Kaberle, you are duping anybody. Every one in the arena knows he isn't going to shoot, including the opposing team. I saw one play where Kaberle pump faked twice in a row and the Senators' PK team didn't even flinch. Hey Tomas, if you really want to fake out the opposition try shooting the puck for once. They'll never see that coming. Oh, and hit the net when you do.

The other power play setup I totally despise is the puck along the goal line thrown to nobody in front of the net shown below: 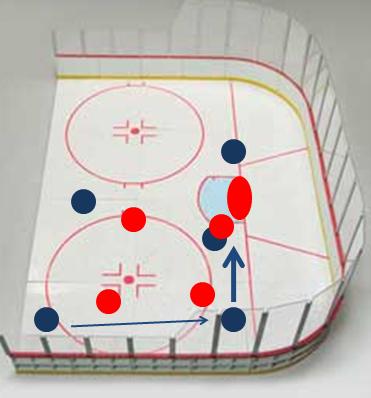 Who in the hell is that puck supposed to be going to? It's surely not going to get to the winger on the far side of the goal that's for sure. There's the center, the defender on him, and the goalie in the way of such a "pass", yet the Leafs tried to get it to him time and time again. That opposite winger should either be in the slot just below the hash marks to receive a pass from the guy on the boards, or behind the goal line to get a pass in Gretzky's office and look for an opening to hit a teammate who has broken free in the slot. 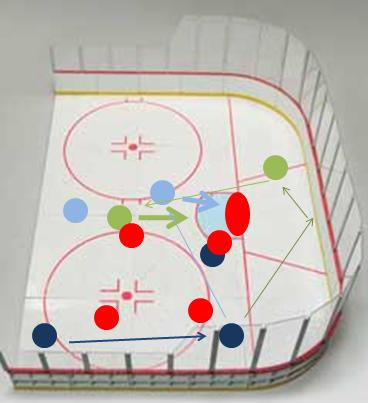 Forcing in through the goalmouth is not going to work here, ever. Wilson should know this and filter it down to the team in practice. Seeing the Leafs try this over and over is just unacceptable. Sure you can shout things like FIRE KEITH ACTON!!!!1, but ultimately the way the team plays on the ice is the head coaches responsibility.  Head coaches in football have offensive and defensive coordinators, but he ultimately decides what overall schemes his team is going to use. The same holds true for hockey. Acton may be the man running the drills in practice, but Wilson is the man who tells Acton what to do. The blame for this terrible Leafs PP can only fall on Wilson's shoulders.

And that concludes the lesson for the day.