Blacker to Kessel... He Scores

Phil Kessel scores! But how did he do it?

Share All sharing options for: Blacker to Kessel... He Scores

Continuing our frame by frame breakdown series we started yesterday. If you'd like to see one for our defensive implosion check out this morning's FTB. 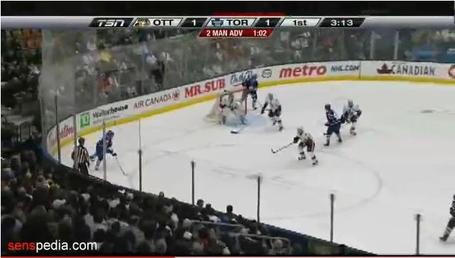 As we open the scene Phil Kessel has the puck in his power play black hole on the left by the referee. Nikolai "Sneaky Russian" Kulemin is hiding behind the net in the right place for a cross crease tap in given his left-handedness and Bozak is in the slot with all three Ottawa players.

Up top we have Jesse Blacker's leg and Francois Beauchemin is hiding. Let's break down what happened and why this play led to a goal.

First off the Senators triangle is way too tight. They're going to let Kessel make a setup pass to the point which gives the Leafs a ton of options: 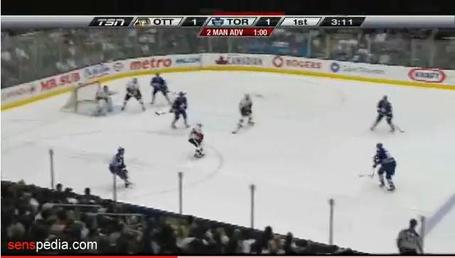 Kulemin and Bozak have shifted to put three total bodies in Elliott's way and Blacker has two great options here. The first is to dish to Beauchemin who can fire through a four player screen from his angle. The second? 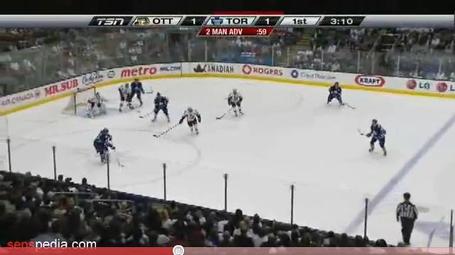 Give it to the goal scorer. Ottawa shifts their defensive formation way too far to the right to cover Beauchemin dropping to the top of the circle for a shot. In the above cap you can see Elliott still in position for Blacker even with the puck on Kessel's stick.

Kessel is underneath two of the three Ottawa forwards and has an open lane toward the goalie who isn't in position yet and the rest is obvious: 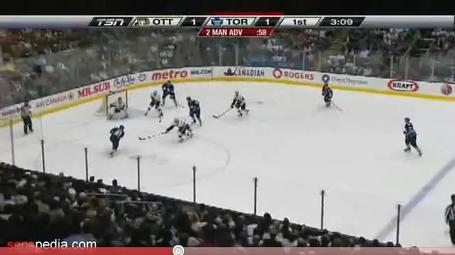 Note the timestamps. In four seconds Kessel makes a pass and Ottawa is forced to choose between two options: a Beauchemin shot or a Kessel shot. In those four seconds Elliott has to move from his close post to the top of the crease and back as Kessel exits his field of view and re-enters.

The Kessel to Blacker back to Kessel and shot takes only two seconds. That's how fast this game moves even in preseason.