Video review of how the Toronto Maple Leafs managed to score a goal.

Share All sharing options for: McKegg from Caputi: A Funny Name Extravaganza

Our video breakdown series continues due to popular demand. Last night's game was pretty ugly; neither of the Flyers' regulation goals were due to anything more than weird bounces and the Leafs second goal was a shot from the point that hit someone and went in. That leaves only one real option... McKegg from Caputi. 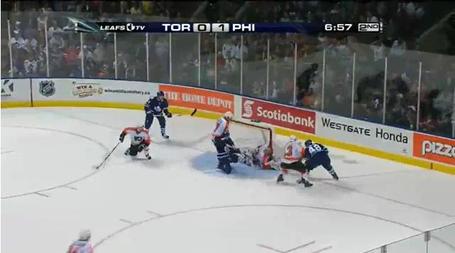 Caputi is the guy in the corner at the top of your screen. Everyone else is laying around on the ice like Brian Bellows. This isn't a pretty play. A lot of things are going wrong simultaneously and the Leafs are trying to jam the puck past a sprawling Boucher. 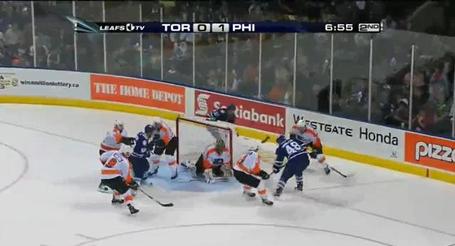 Ryan Hamilton (Toronto #48) fishes the puck back to himself but almost immediately loses it due to having two men touching him and no good angle to shoot. Meanwhile in front of the net three Flyers try to figure out why McKegg is making that face leaving Caputi alone to sneak behind the net. 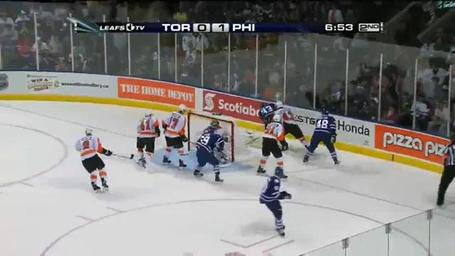 Caputi grabs the puck and curls away from the double coverage on Hamilton. This has all been pretty boring but the next thing that happens is really nice. Maybe it's lucky but it's something that works and that forwards are trying to do all the time. Better lucky than good anyways. 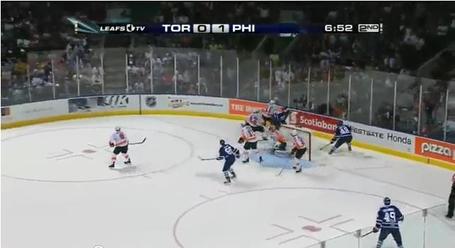 Caputi abruptly changes direction and the two Flyers players run into each other which gives Luca the space he needs to... 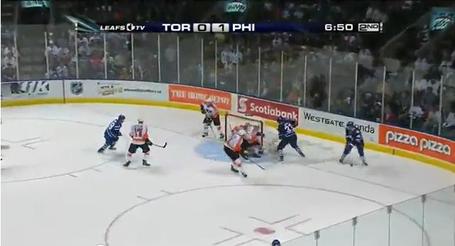 ... walk back around to the front of the net. That's a classic power forward move and Caputi executes flawlessly. By now the Flyers are scrambling and Boucher has moved across the net and back. He makes the save but can't control the rebound and if you've been watching Greg McKegg he slips up towards the slot and around behind his man. 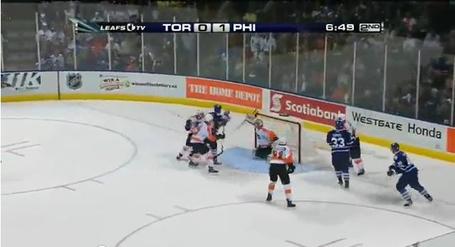 As he steps past his coverage who don't know where the puck is McKegg is in prime position to put an essentially empty net (from his angle) goal home. Tie game.

This is a pretty standard "defensive breakdown". The Flyers end up covering the wrong men and shifting their focus as the puck moves around the zone instead of covering their man and their area. As we talked about a few days ago the Leafs actually have a ton of options on this play; if Caputi passes the puck up along the boards to his defenseman that sets up a whole new set of plays with five Flyers under the faceoff dots.