Share All sharing options for: The Rocket - Dave Reid

One of the things that struck me as interesting about the requests that came in for LotD candidates was that a cluster of them are associated with the single most depressing team I have ever seen - the 1990-91 Leafs. That, of course, was the "did we really trade Eric Lindros for Tom Kurvers" season, in which a young team beset by injuries to key players was gutted just enough to finish second-last. ("Hooray! It's only some kid named Niedermayer!) This year marks the 20th anniversary of that hallowed season, making them a great candidate for this year's tribute team.

As hideous as that year was, though, no season is complete without at least one interesting highlight. For 1990-91, one of the leading candidates has to be the play of Dave "Rocket" Reid.

Dave was an unheralded mid-summer pickup in 1988. He'd had a number of cups of coffee with Boston - a couple of which were even quite promising - but had simply never been able to stick. The Leafs were always experimenting with other teams' castoffs (the season could never begin without a waiver-wire pickup at the end of training camp) and Dave fit that bill. He'd shown scoring potential before, maybe he could do it again.

At the outset, it looked like a steal. Wearing number 34 (which was then a training camp number, sort of like wearing 53 today) Dave Reid was a point per game through his first ten games as a Leaf. Now assured of a place on the team, he switched to number 14 and his production immediately fell off. He'd finish with 30 points.

He was hardly a bust, though. It turned out that Reid could be an excellent checker and penalty killer. On a team that gave up 83 more goals than it scored, Reid somehow managed to finish with a team-leading plus 12. (Tom Fergus was -38.)

Thirty points was to be Dave's ceiling in Toronto. He hit for that figure in '88-89 on a team that had some trouble scoring, then "slumped" to 28 it in '89-90 on a team that scored goals in buckets. In '90-91 he matched those 28 points, but made double digits in goals for the first time as a Leaf, scoring 15 times.

What was interesting about his goal total, though, wasn't that he scored them but rather how.

Of those 15 total goals, eight were shorthanded.

Eight shorthanded goals led the NHL and tied a Leaf record set by Dave Keon twenty years earlier. During one stretch, he scored shorthanded goals in three consecutive games, four goals in total, which I think has to be some kind of record. It was at this time that the TV announcers - probably Cole and Neale - dubbed him "Rocket." Yes, it was tongue-in-cheek, but it was fun and it annoyed people, so it's worth repeating. Of 33 Leaf goals over three seasons, a total of 13 were shorties.

That performance was just good enough to get him out of town. The Bruins signed him back for 1991-92 and he responded with his first 20-goal season. He'd play a solid two-way game for the rest of the decade. He finished as a veteran checking presence on two Cup winners - Dallas in 1999 and Colorado in 2001.

But in Toronto, at least briefly, he was the Rocket, and one of the few fun moments in an otherwise dismal year.

Visit the Dave Reid Gallery at the HHOF. (Note - there are actually two distinct Dave Reids - both of whom played for Toronto and magically share a gallery. Funny that.)


What the HHOF has to say about Dave Reid:

While growing up as a teenager in Etobicoke, Ontario, Dave Reid got close to the pros by collecting their images on hockey cards. It's a habit that has stayed with him right into adulthood. By the time he joined the Maple Leafs in 1988, his collection was 180,000 strong and included baseball, football, and even Batman.

But while enlarging his collection during those early days, Reid also enlarged upon his on-ice career, skating for three years with the Peterborough Petes of the OHL from 1981 to 1984. The Boston Bruins were sufficiently impressed with his performance to pick him up in the 1982 Entry Draft. Two seasons later, he saw his first action with the club, an event that launched a pattern of shuttling between Hershey, Moncton, Maine, and the parent Bruins. The rocky ride went on for four seasons when the Bruins decided not to renew his contract. Reid looked destined to remain a career minor-leaguer.

With Toronto, Reid was thrown onto a checking line with Dave Hannan and Lou Franceschetti. The trio clicked with their less-than-fancy, dump-and-charge style of play. Reid looked very much at home until his contract expired in 1991. It then looked like history repeating itself when Reid signed again with the Boston Bruins who, during the course of the 1991-92 season, sent him back down for a return visit with the Maine Mariners of the AHL. But this time the stay was short and Reid resumed his NHL gig for good.

He lasted one more season in Boston and then signed as a free agent with the Dallas Stars who welcomed his tenacious defensive play and streak scoring outbursts, especially the odd cluster of shorthanded goals. In 1998-99, all of Reid's patience and hard work paid off as his Stars won their first and only Stanley Cup.

The following year, life only got better as he signed with the Colorado Avalanche, another dominant team of the NHL. And as usual, Reid plugged right into the club's defensive system, making himself his usual useful self. At the close of the 2000-2001 campaign, Reid was awarded his second Stanley Cup ring. 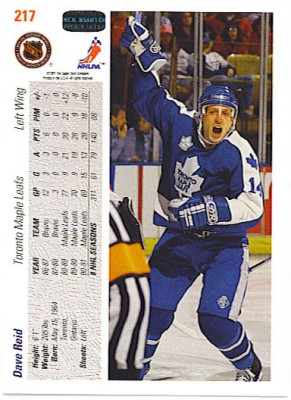