Kaberle Moves the Puck Up Ice

Share All sharing options for: Kaberle Moves the Puck Up Ice

We can finally make section names so these have a new home: Chemmy's Corner. Effective immediately I have begun wearing odd suits with enormous collars and talking about good old Canadian boys. Our video review series continues. 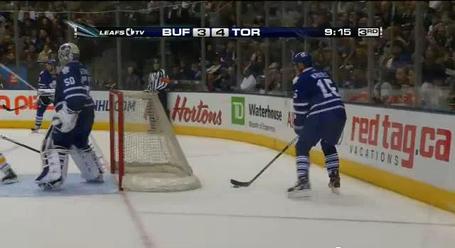 "Psst. Hey Tomas. Tomas. Hey. Over here. What's going on back there?" 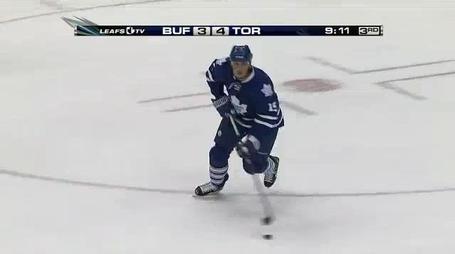 That's better. Now we're rolling. Tomas Kaberle has the puck as visible. The time is 9:11. 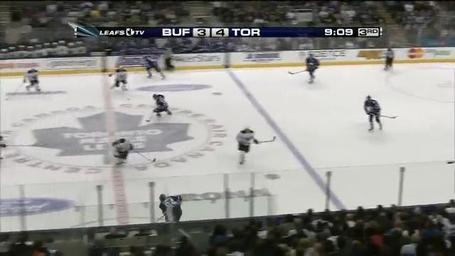 Now Mikhail Grabovski has the puck and the time is 9:09. Observe the Sabres players; this screen cap is really funny. The guy in the top left is skating the wrong way. The guy on the top by the red line looks like he's going to fall down. Everyone on the Sabres had no idea that Tomas Kaberle would pass the puck to his three streaking options.

That may be untrue. Patrick Lalime probably knows what's coming. He's getting the shakes on the bench. "It's happening again." 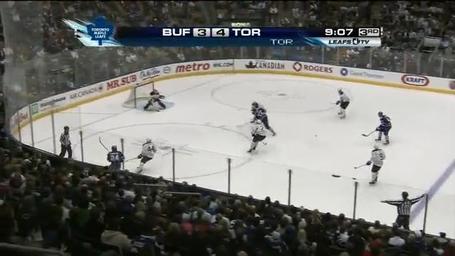 Grabovski carries the puck over the blue line and tries to feed Clarke MacArthur in the slot. The puck caroms off someone and Nikolai Kulemin is in the correct place for this play: trailing the first option. The puck trickles back to him as he enters the slot.

Note Derek Roy to Kulemin's left. He's coasting into the zone even though the Leafs have good position on the Sabres in the zone. He's way out of position, being the center, but could still salvage this by picking up Kulemin high in the zone. He doesn't do this because Derek Roy doesn't play defense. 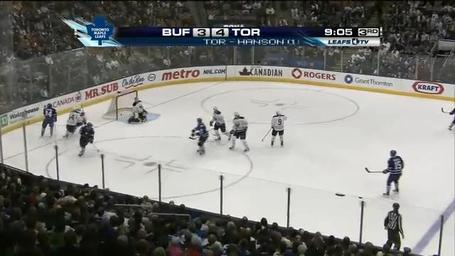 Hopefully Mr. Roy enjoys watching Kulemin score goals as much as we do. The puck's in the net and Jonas Enroth is doing his best "Toskala arm flop" after being beaten like a rented mule.

This is what we need Kaberle to do: get the puck in our end and create havoc in the neutral zone. He did that on this play last night and from the moment he let that pass go Buffalo was thrown off.

Check out the video here starting at 4:35.