A number of years ago I was at a conference for Oracle users.  During one of the sessions, the presenter put up a slide with a number of hockey names on it, most of which were then-current NHLers.  The exception was the goaltender.

"Does anyone know who Bunny Larocque was?"

Given that this was a mostly American audience, there was not a whole lot of response.  Finally, I put up my hand.

"Yes," I said, "he's quite possibly the worst starting goaltender in the entire history of the Toronto Maple Leafs."

The speaker was sort of taken aback.  "Well, that's true, I guess," he said, and then proceeded to make his point about Bunny being the ultimate backup (not particularly certain I agree, but that's neither here nor there) and then launched into whatever point he wanted to make about backup utilities.  The presenter and I later agreed that whatever else was true, Bunny had a kickin' mask.

I'm now inclined to be kinder to Bunny than I once was.  There are a couple of reasons for this.  The first is that I've since been able to watch both Raycroft and Toskala be starters since I made that comment.  The other is that, on reflection, Bunny's numbers aren't significantly worse than those put up by Rick St. Croix, Palmateer v2.0, Don Edwards, etc.  For those other goalies, my dominant emotion was pity, not disdain.

Bunny's lone season as the undisputed number one - 1981-82 - was also the season the Leafs went with the three rookies (Benning, Boimistruck, McGill) on the blue line, a season that supposedly ruined the lot of them (again, I dispute this, but not here).  Bunny faced over 33 shots per game and no doubt a lot of them were nasty, so maybe we can cut him some slack.

The experience of being a Leaf starter wasn't kind to anyone.  The Leafs went through a bunch of them between 1980 and 1986, and nobody seemed able to survive the job for more than one year.  The Leafs' best performers in net were generally rookies who'd subsequently be eaten alive as sophmores.  Some would survive to play another day (Bester, Wregget) while others would drop off the face of the earth (Tremblay, Bernhardt).  It made for a completely new cast of characters ever season or two, which kind of parallels what we've seen here lately.

It's too early to be alarmed, but the one thing I've been waiting for out of this team is a great goaltending performance, and the closest that comes to mind is the play of James Reimer.  That's not really how it's supposed to work out.  Now, I do realize that Giguere has played all of one game and Gustavsson just parts of four.  I remember Ed Belfour having a lousy pre-season, then shutting out the Pens in the season opener and never looking back.  Still, I also remember Toskala last year, and given that this team needs quality goaltending to get anywhere, I'd feel a lot better if someone other than Reimer stood on his head tonight.

Back to Bunny, though.  The '80-81 Leafs picked him up late in the year to play alongside Jiri Crha.  He got a couple of wins early (at least one against Montreal), which got the fans on his side.  He was also in goal for a 14-4 pasting against Buffalo (he gave up the first ten, nine of which came in the second period, an NHL record) which helped him to a 5.22 average over his eight games.  None of the Leaf goalies were particularly good in the playoffs, but Jiri Crha was horrific, so this helped Bunny claim the starting role a year later.

Bunny found, oddly enough, that Benning, Boimistruck and McGill were a little different than Robinson, Savard and Lapointe.  He'd never before played the volume of games that he did that season and he never faced chances like that.  While an .880 save percentage was considered quite reasonable in '81-82, Bunny's .861 was not really what was hoped for.  Rookie Vince Tremblay would be promoted to starter in '82-83 and Bunny would head to Philly for Rick St. Croix early in the new year.  He'd only play a few games for the Flyers and Blues before retiring.

While Bunny's numbers don't look terribly good, neither do anyone else's.  The one thing that I don't ever recall hearing about him, though, was an air of total nonchalance about losing, a complete unwillingness to take instruction, or a tendency to say "I thought I played pretty well" after giving up four or five goals (six or seven in those days).  This alone probably means someone else should be saddled with the title of "worst starting goaltender in the history of the Toronto Maple Leafs."  Bunny, I've wronged you.

Visit the Bunny Larocque Gallery at the HHOF.

What the HHOF has to say about Bunny:

Netminder Michel Larocque spent eleven years in the NHL. He was best known as Ken Dryden's backup when the Montreal Canadiens dominated the league in the 1970s.

Born in Hull, Quebec, Larocque crossed the Ottawa River to play junior in the OHA with the 67's. Beginning in 1969-70, he led the league in shutouts three straight years and played 162 games over that same time. He also posted the lowest goals against mark in the OHA twice and was named to the league's first and second all-star teams once each. Larocque was also picked as an honourary junior with Team Canada for the 1972 Summit Series against the USSR.

The young star was selected sixth overall by the Montreal Canadiens at the 1972 Amateur Draft. He made an impressive pro debut the next year with a league leading 2.50 goals against average in 47 games for the AHL's Nova Scotia Voyageurs. Larocque was voted on to the league's second all-star team and appeared ready for the NHL.

When Ken Dryden sat out the 1973-74 season to finish law school, Larocque played 27 games as a rookie backing up Wayne Thomas and Michel Plasse. His confidence was give a boost when Montreal opted to start him in the post-season but the team was knocked out by the New York Rangers in first round.

Following the return of Dryden in 1974-75, Larocque settled in as the Habs' backup for the next five seasons. He averaged 30 appearances per year and was a part of the club's four consecutive Stanley Cup wins between 1976 and 1979. Beginning in 1977, he shared the Vezina trophy for three straight years with Dryden.

In 1979-80, Montreal was forced to retool and brought Denis Heron in to share the goalkeeping responsibilities with Larocque. The club was eliminated in the quarter-finals by the Minnesota North Stars and the veteran netminder was relegated to second string status in 1980-81. Prior to the March deadline he was sent to the Toronto Maple Leafs for Robert Picard. He saw plenty of rubber behind the Leafs' horrid defence and was in goal when the Buffalo Sabres scored an NHL-record nine goals in one period during a 14-4 loss. Larocque helped Toronto squeeze into the playoffs where they were crushed by the New York Islanders.

Larocque attempted to start fresh in 1981-82 and played 50 games for a Toronto team that managed to be worse than the previous year's edition. He toiled briefly for the Leafs in 1982-83 before moving on to Philadelphia and St. Louis. He retired after playing 13 games for the IHL's Peoria Rivermen in 1984-85. 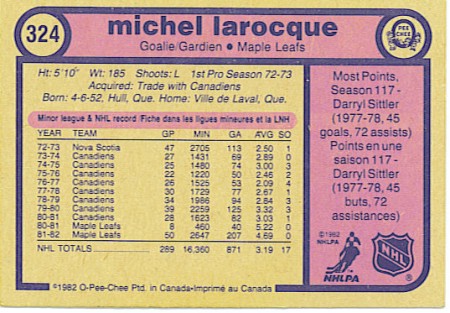