Kotter #3 - Nobody told me there would be any math.

Share All sharing options for: Kotter #3 - Nobody told me there would be any math.

Over the holidays, one of the games we played was Scrabble.  Our eldest got it from her grandparents.  Now, I have never particularly liked Scrabble, and this is why:  the very first game we played, I took my seven pieces from the pile and wound up (in order) with the following - T O S K A A C.

No game that torments you this way should be permitted to exist (NHL hockey and Leaf games in particular excluded).

Repeated games of Scrabble, however, were far better than some of the other games we played - things like "Fever, Fever, who's got the fever?" and "It's 3 a.m., does this mean the blue medicine or the pink one?"

So needless to say, for the past several weeks it was "it's three o'clock and most are sick" rather than "all's well."  Of course, everyone is fine in time to go to school.  :)

In unrelated news, I now have a blog.  I've been so excited over it and so proud of it that it has lain dormant for over two months, with nothing but the default "Hello World" post and a comment that says (seriously) "This is a comment."  I am nonetheless thrilled to have not one but TWO places where I don't post often enough.  It does, however, give me a place for a post about Johnny Bench that I just can't find a Leaf angle for.  In other unrelated news, I ate a Maple Leaf doughnut today.  It was so exciting that I blogged about it.

Maybe I should just play more Scrabble instead.

When I first saw this card (this time around, not in 1976), I thought, "This one has to be used after a win."  It captures the small victory - that little mundane moment in time when no matter what has transpired, you have survived it.  Even though the whole mess starts again tomorrow and today's accomplishments will be all but forgotten, for this moment, you have won.  There is freedom.  There is euphoria.  There is hope.

Back when the Leafs were comparatively good, perhaps even legitimately good (we're talking Quinn-era here), I used to feel this way a lot.  The Leafs would win, I'd get everyone to bed and have a couple of moments when walking the dog (not a euphemism) to revel in the victory, joyous in the fact that the neverending steam of detractors (who shouted "Leafs suck" even louder when they were clearly wrong) were upset again and the good guys had done precisely what I had thought they could.

I don't really feel this now.  Last night's win was impressive (and illustrates just what a string of good goaltending can do for a team, not to mention some balanced scoring) but there's nowhere near the satisfaction in it.  I don't know whether it's just fatigue or the fruitlessness of a season that has been reduced to looking for incremental improvements, but I'm just not getting the same level of satisfaction out of it.  Maybe if they go on a miracle run, that will help. 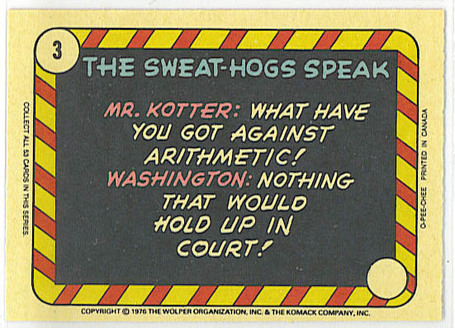 The back of this card has been haunting me for weeks because it demands (or at least I imagine it does) that I address one of the great divides that has appeared on this site over the past number of months - the advanced stats guys vs. the non-advanced stats guys.

"Great" is probably an exaggeration.  I don't think the divide is either as severe or as black and white as it is sometimes portrayed.  It's not likely that the serious stats guys have concluded that they no longer need to actually watch hockey and I doubt that the "anti" stats crowd totally dismisses the value of analytics.  It's always somewhere in between.

That said, my own take on it is that I really like the idea of advanced statistical analysis but I get irked by the sloppy interpretation of data.  I think that the analysis tends to be very interesting when dealing with hockey at the macro level and highly suspect at the micro.

The notion, for example, that save percentage is influenced by game score is really interesting to me.  I also liked the work that was done regarding scoring chances, the best areas to score goals from and the extent to which shot location influences shooting percentage.  This is all good work and I find it enhances my general understanding of hockey.  Where we get into trouble is when we go from the general (the game at large) to the specific (player X).

The reason that the people who develop the measures want large sample sizes is that it protects them from having to account for individual circumstances that impact performance.  When looking at all shots and all goals, it is possible to suss out general truths and ignore the fact that shot A was taken by Sidney Crosby and shot B was taken by Brett Lebda.  Across 700-odd NHL players, individual skills or tendencies tend to even out.  When you take the information you've gathered, though, and start to apply it to individuals, it's really important to know whether you're dealing with Crosby or Lebda because you need to account for their specific circumstances when you interpret their numbers.

Let's take a really old example.  In 1986, Klein and Reif came out with their first Hockey Compendium.  This was the first case I'd seen where people were trying to analyze stats and find something more about them.  This was the introduction (to me, anyway) of the Goalie Perserverence Index, normalized production and, of interest here, relative plus/minus.

The thought with relative plus/minus was that plus/minus as a stat was very team-dependent.  They wanted to see who the real performers were by looking at plus/minus relative to one's teammates.  A guy who was a plus five on a brutal team could be outperforming (in their take) a guy who was plus ten on a powerhouse.  Their methodology was pretty simple - they took the total of even strength and shorthanded goals for and against and determined an expected plus/minus score for a generic member of the team.  Those with values above this total were outperforming expectations, those below were underperforming.

Using this methodology, one of their more startling conclusions was that Bob Gainey was tremendously overrated.  Compared to his teammates, his plus/minus was horrific.  In fact, he's one of the few (maybe the only) players ever to win the Selke as a minus.  As a Leaf fan, I was happy to accept this at face value, but something never really sat right.  Gainey's status amongst other players and media types could understandably be overrated, but having read Ken Dryden, the value placed on him by his own teammates just didn't line up with that.  If Gainey wasn't pulling his weight, you'd think the rest of his teammates might have noticed.

Over time, I realized that the problem with Klein and Reif was that they made no allowance for the concept of "role."  They acknowledged that Gainey's job was as a defensive forward but stated that since his plus/minus was so bad, he clearly wasn't terribly good at it.

The question they don't seem to have asked is this: what should the stats of a defensive forward look like?  (Interestingly - to me - there's been a discussion of just this over at Behind the Net (a League of Extraordinary Statisticians post) - link below.)  Plus/minus (and Corsi, Fenwick, whatever) is basically a ratio - a measure of how much you score versus how much you give up.  Gainey was never much of a scorer.  His job was to shut down the top line of the opposition and trust the rest of his team to outscore whoever was left.  Did he do it well?  The Habs won an awful lot.  There's not a lot of other evidence.

As a thought exercise, if a player held the opposition's best line to an even rating five games out of six and gave up a goal in the other game, his team should stand a pretty good chance of winning more often than not.  Being a minus once ever six games leads to a season rating of -14, though, which looks pretty brutal.  It's not surprising that the Selke tends to go to players who can score goals as well as check.  It makes the plus/minus look a lot better, but it doesn't mean that they check any better.  (The discussion at LoES gets into this - whether a two-way forward should really be categorized with defensive forwards.)

Most of the stats we have are derived from offensive events - goals scored, shots attempted, shots taken.  Defense is defined by things that didn't happen (the pass didn't get through, the guy wasn't open, the shot was taken, but it wasn't the shot he wanted) and is thus largely unmeasurable.  This is why everyone looks for proxies for it.

For me, I haven't seen a proxy yet that is particularly inspiring.  We can judge from zone starts the kind of tasks a player is given.  QUALCOMP can give us an assessment of the propensity of the opposition to outshoot whoever they face.  We can reasonably derive from the data who the defensive players are.  What we can't really tell is how good they are at it.  The fact that a defensive player is being outshot, sometimes severely, doesn't mean he isn't good at what he does.

I find that the people who develop these measures tend to be very specific about their usage, their limitations and what can and cannot be derived from them.  They also tend to be very good at reassessing and revising based on new evidence.  It's the secondary market, if you will, where we find trouble.

People will often take a measure and use it to make a blanket statement about a player.  It may be that Corsi is a good predictor of overall team success, but if Player X has a brutal Corsi rating, it doesn't tell us that he sucks.  It's entirely possible that he does suck, but Corsi alone can't tell us that.  We need to know what his role is and what an expected Corsi rating for this role would be, given his opponents, his linemates, their respective propensity for offense, the system the team is playing, etc.  Without that, the number is basically meaningless.

Some of this might just be message board/comment thread tendencies.  The formats tend to lead to shorter comments and perhaps it is simply expected that someone who says "Player X sucks.  His Corsi is brutal" is implying that it sucks in the context of his QUALCOMP, zone starts, etc., etc.  A pithy remark can't come with a thousand words of qualifiers or it just won't work.  Some will read this and say, "Of course I consider all sorts of other factors."  Good.  Please continue to do so.

At any rate, that's my impression.  I really enjoy the stats, I'm iffy on a lot of the interpretation.

I've looked at card number four in this set.  It's pretty thin, but seems free of landmines.  Should take me less than six weeks to write, I hope.