Leafs in the Big Apple

Share All sharing options for: Leafs in the Big Apple

The last time Jonas Gustavsson started at MSG was April 7th 2010. I had been given a pair of seats two rows behind his net as a gift for my wedding and took my new wife to the game. We were surrounded by business people in suits with women half their age and I thought "well, at least we won't get heckled".

It took 21 seconds for the Rangers to score their first goal and ten minutes later they scored a pair 30 seconds apart to make it 3-0. I stood up to cheer for Dion Phaneuf's first goal as a Toronto Maple Leaf and as someone told me to "sit the fuck down" I thought that at least Phaneuf was finding his game and things might turn around. Oh well.

The truth is I don't like New York. With the exception of a very few individuals I think New York is a hellhole. It's easy to fall in love with the flashing lights and fancy restaurants if you're visiting for a week or three but Leafs - Rangers matchups always remind me of the things I don't like about New York. 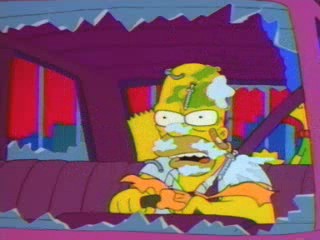 The Rangers, for all of their insane GM's terrible trades and signings, continue to win games in a tough division to underscore what great goaltending can do with an otherwise middling team. Marian Gaborik is mired in a slump, he has 11 goals this season (though he missed time this season after the Leafs broke him in game four of the season).

The Leafs have looked pretty decent of late. James Reimer turned in some top quality goaltending for a week and a half that saw the Leafs win some games they probably shouldn't have. The team scored in bunches to bail out Gustavsson and Giguere lost a close one in the shootout Saturday.

Jonas Gustavsson has had plenty of rest and plenty of time off to work with Francois Allaire. If this season is realistically over for the Leafs one thing we should be looking at is prospects to impress in their playing time. Personally I was ok with our 2-1 loss to Boston because James Reimer held the Bruins to a pair and looked solid doing it.

Jonas Gustavsson is in danger of slipping beneath James Reimer on the depth chart. He's been given every advantage; a default job in the NHL, good coaching, and per interviews with all our goaltending prospects he's in an enviable situation. Now it's on him to start performing.