Flashback to January 22, 2011 when four rabblerousers almost started a brawl with the Washington Capitals.

The Toronto Maple Leafs fell 4-1 to the Washington Capitals to slump to their fourth loss in their last five games. They actually played a pretty good game to my eyes. Although it is tough to analyse the game as well from platinum seats. More on that after the jump.

As for the game, the sole goal came as a result of Tim Brent showing the rest of the team how to get to a rebound. Jean-Sebastien Giguere was the definition of a replacement level goaltender - James Reimer's call-up will hopefully inspire him to better - and the defence struggled to get shots through to the net. There were numerous times when the Leafs had created the necessary traffic and chaos in front of Braden Holtby but the shot would not make it through. Alex Ovechkin, probably aware that Chemmy had been preparing taunts, threw up a hat trick including an empty netter that displayed more hustle than during most of the rest of the night.

So a good Leafs' effort gets wasted because the team just couldn't finish. Oh well. 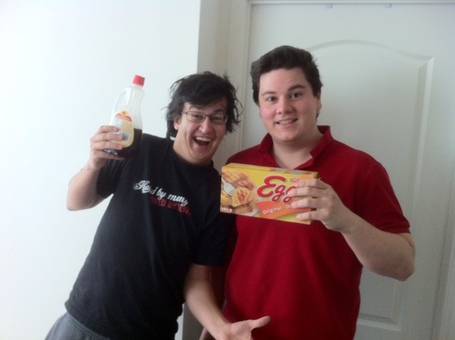 More importantly, this weekend was a gathering of the PPP braintrust. As you can see, Saturday started off with the breakfast of champions irate fans: waffles! We needed a lot of energy to get through the day which would include a tour of the ACC. 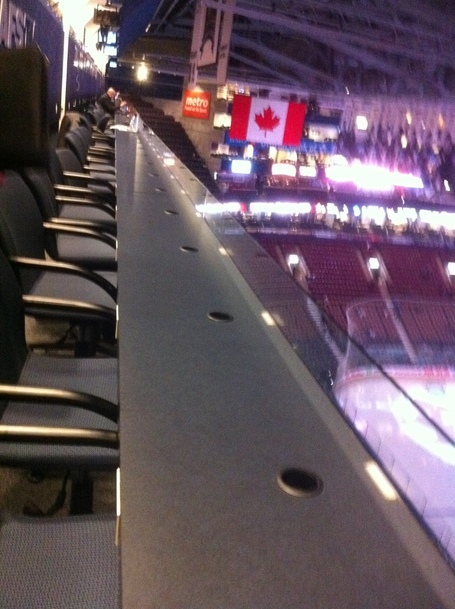 After finding out tour guide despite my best efforts at derailing our night (pro-tip: print off important things like phone numbers and names and meeting places because smart phones aren't always 'smart') we took an elevator ride up to the top of the ACC to start our tour. This is a picture of a barren media row. Although we did run into Howard Berger. We didn't want to get our tour guide in trouble so we just let him walk by. I'm sure Ben appreciated it. 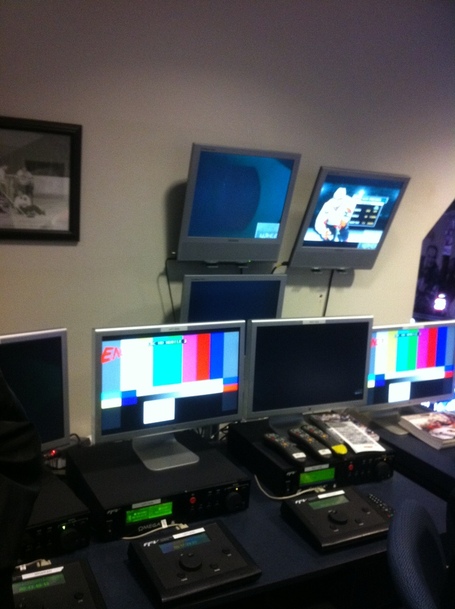 The NHL employees in this room were pretty nice. They review plays and forward them over to the War Room if they can't get the right answer. They also laughed when Chemmy made a Mike Murphy crack. Their official answer: "No comment" but their eyes said "Dean Lombardi's a jerk." 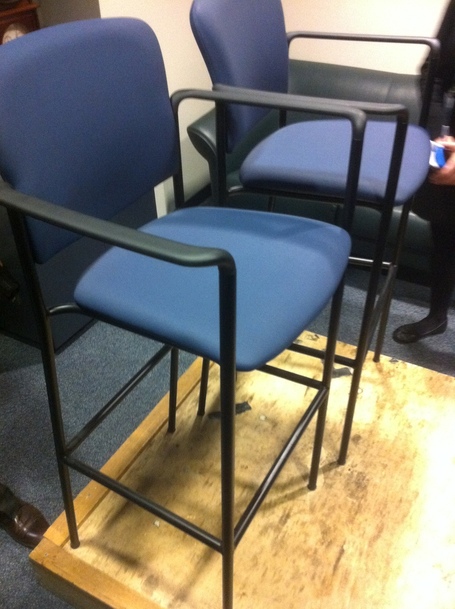 These are the extra chairs in Brian Burke's box. They are there as overflow seating when special ticket holders (we saw two of them up there during the game) get to visit the box. I am going to assume that this is also where Burke makes Dave Poulin sit for suggesting they sign Brett Lebda. 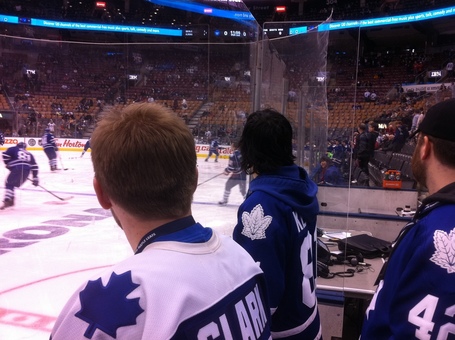 In The Penalty Box: Trouble Brewing

This was actually pretty damn cool. Now, because of the way the penalty boxes work, we had to be in the Capitals' box. We also had to sign waivers which didn't seem like such a good idea when Jason Chimera wanted to kill us. Some day someone is going to read those waivers and laugh at who was on this tour.

Some players started stretching in front of us including Jay Beagle. Ryan stepped up with a message for him: "Hey Beagle, 24/7 sucked." Beagle, to his credit, laughed. Our next attempt at chirping was not as well received. 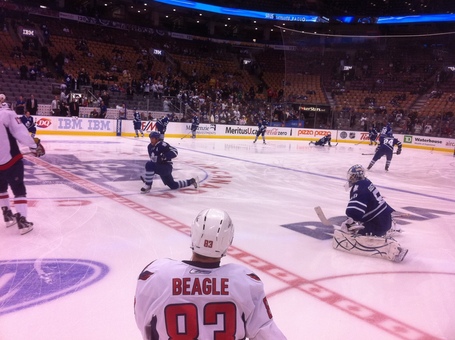 Jay Beagle - In Our Good Books

Semyon Varlamov was another Capital that took up a spot in front of us so I stepped up to the plate:

Geez, didn't know it was so easy to get into Chimera's head. I used to think that when players' lost their heads that it wasn't quite fair to judge their reaction because you never know what was said to them but based on Chimera I have to think that maybe they are just really sensitive.

We had some other good chirps that we didn't get to deliver ("Hey Mike Green, you're our favourite Caps forward", "Hey Ovie, missed you in Vancouver") because our tour guide Ben was visibly shook and we didn't think the Leafs would save us if the Capitals came flying into the penalty box to kill us. 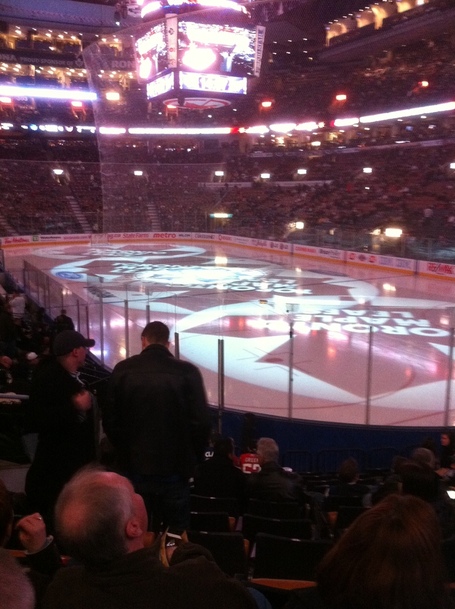 These seats will work

People that sit in the platinum seats get a lot of grief for not being in their seats at the beginning of periods. "The lines for food are long!" "There aren't enough bathrooms!" After sitting there, I have even less sympathy after sitting there. We didn't get out of our seats once until after the game. They deliver food and drinks to your seat! It was glorious. And dangerous. 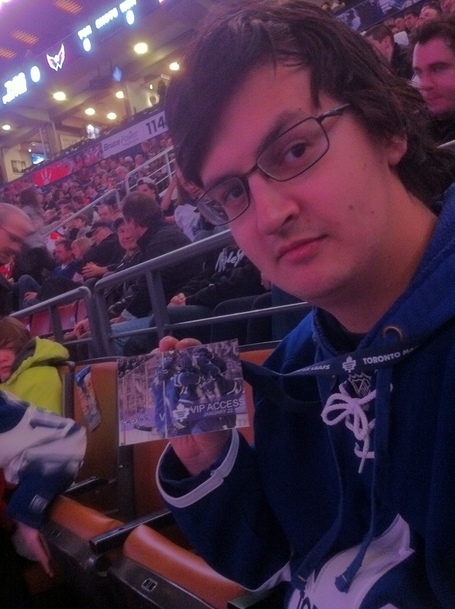 That wasn't even the end of the fun. We got to go to the post-game presser in the bowels of the ACC. Once again, we were asked to be on our best behaviour so even though I bought a Mikhail Grabovski jersey before the game I wasn't able to geek out when I saw him in the hallway and we couldn't talk to Jonas Gustavsson since he was talking to one petrified 4 year old and his father (seriously, the kid was about to bawl). We did, however, get to see a classic Ron Wilson angry answer. 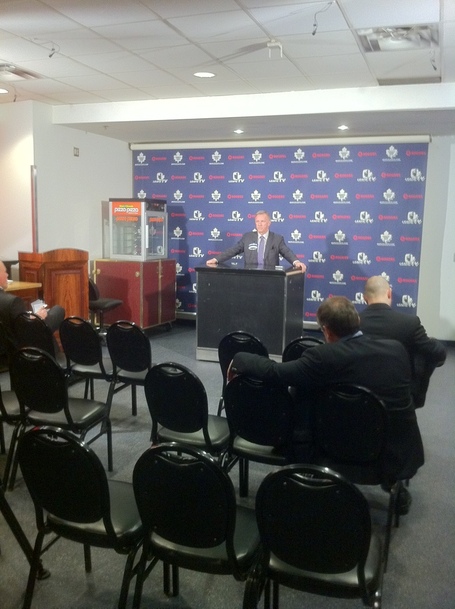 "Could someone please powder that bald head on the left, it's tossing up too much glare."

And then we went to drink with Archi, Jared, Clrkaitken, bkblades, and MC79hockey and we all lived happily ever after. Except Chemmy who basically died in the morning.