Not a whole lot of new, Leaf-related articles to talk about today, but as usual, there's plenty of other interesting stuff from around the league for your perusal to be found in today's links. Most of the Leaf content focuses on the goaltending-triangle we have going on between Jonas Gustavsson, J.S. Giguère, and now, James Reimer. From James Mirtle:

General manager Brian Burke declined to comment on Gustavsson’s immediate future, but it’s clear the team is at least contemplating sending him to the Toronto Marlies on a two-week conditioning stint following this weekend’s all-star break.

The league would have to okay such an arrangement, as under any other circumstance, Gustavsson would have to be made available to 29 other NHL teams via waivers to go down to the minors.

Update: Unfortunately, as per the CBA, we can't actually send Gustavsson down without him being injured in some way, shape, or form: 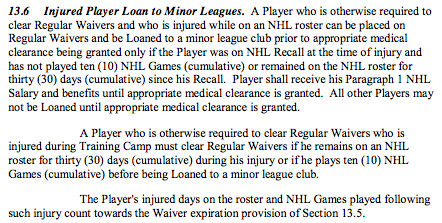 Leafs have nothing to lose bringing Reimer back, or do they?
Yeah, they probably do. But, on the other hand, there's plenty to lose in not bringing him up.

'The Maple Leaf' revealed as 23rd NHL Guardian
I can't say I'm at all interested in seeing what this comic is going to look like, but I had to go see what they'd done with 'The Maple Leaf'.

Justin Pogge fights Penguins, continues descent into insanity
Do I need to say more to get you to watch this video? I didn't think so.

A Cautionary Tale on Goal Differential - Behind The Net
Hawerchuk (Gabe Desjardins) doesn't like how they translate into chances of winning a Cup.

Impact of Firing a Coach on Fenwick % - Behind The Net
More fun facts from Hawerchuk.

P éladeau proposes ‘substantial’ financing for Quebec City NHL arena
The Globe and Mail reports that the president of Quebecor (which owns The Sun) says he’s willing to spend ‘tens of millions’ for new multipurpose venue. Good on him, I guess.

Forsberg skates with Avs
For those of you who weren't already aware, Forsberg is attempting yet another comeback with the Avs. He's been practicing with the team to see if his foot can withstand the grind of NHL action.

Pucking Hilarious is back with more of your favorite T-shirts!