The NHL has suspended Clarke MacArthur for three games (tonight's final preseason game and the first two of the regular season) for his hit to Justin Abdelkader's head as time expired in the third period last night. Damien Burke, I mean, Brian Cox, I mean Damien Cox is reporting that the 'Leafs' (read: Brian Burke) are not happy with the decision by the NHL.

Video of the hit and more thoughts after the jump.

Here's how J.J. From Kansas saw the hit last night:

Still, a head shot is a head shot and whether or not MacArthur is a dirty player (he isn't), this is what we're trying to eliminate from the game and once Shanahan started the ball rolling, to stop it would be disastrous. We set the over/under on the Brendan Smith suspension at 6, I'm going to set this one at 1.5. This one looks no more intentional than Brad Boyes' hit on Joe Colborne and seemed to be slightly lighter contact.

I actually disagree with J.J. on this one. I think that there is enough difference between the two hits to justify giving MacArthur an extra game compared to Brad Boyes. Below is the video that Brendan Shanahan released for the Boyes suspension and I think that when the video comes out for this one that there will be a lot of overlap:

For those that cannot watch the video, Shanahan touches on the following points: 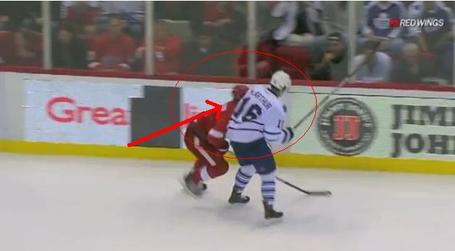 It is pretty clear from this still that Abdelkader's head is the principal point of contact and that, judging by his theatrics and subsequent race after MacArthur, there was no injury on the play. The difference between this one and Boyes is that this play was much slower in developing and not hitting Abdelkader's head would have been much easier for MacArthur.

Obviously, it's a shame that he'll miss the Leafs' first two games of the season as it is vitally important for the Leafs to get off to a good start. The one week break between the team's second and third games means that he won't play again for two weeks. As per the press release, he'll forfeit $ 35,135.14 which sucks for him. What this means for the Leafs' lines is hard to tell with so many of the probable opening night players' health still up in the air. Matthew Lombardi will play tonight for the first time in twelve months, Nazem Kadri is out for four weeks, Tim Connolly will probably rest up for a few more days, and now Clarke MacArthur is out. I actually expect to see Matt Frattin slot into the open spot on Grabovski's line since they seem to have meshed well this preseason. It would be a heady jump for Frattin who at this time last year wasn't even on the North Dakota team. It will also help ensure that the long-term trio of Joffrey Lupul, Tim Connolly, and Phil Kessel are given time to continue to try to build some chemistry.

It is certainly disappointing to see Chris Neil escape any punishment for his attempt to brain Mikhail Grabovski but getting that decision wrong is no reason to get this one wrong as well. It helps continue to send the message to the players that the head is off limits as a target whether intentional or not. Players will hopefully begin to understand that they are responsible for their hits sooner rather than later.