The mouth breathers (Authors edit) Hockey fans are out and while they can't knock the Leafs' record thus far they have instead switched to knocking our top prospect, Nazem Kadri. From the mainstream media (newspaper and televsion commentator alike), to bloggers, to your average Leafs fan on the street, people are saying things along the lines of: "Whats the deal with Kadri? If he doesn't do something, and I mean a big something, soon than I think thats it." or "Burke seems to be running out of patience with this kid." This is complete and utter nonsense, because Kadri is *young*.

Now I could show you that Kadri has produced fine relative to his draft class but that has been done already by Willis on Leafs Nation. Instead I will look at Burke's history with first rounders through his GM years in Vancouver, Anaheim, and Toronto (not including Hartford because he was only there one year).

To look at these players I looked at their production in their first NHL season by goals per game (GPG), points per game (PPG), and average time on ice per game (ATOI). For their rookie season, I noted how many years had past since their draft (ie RNH would be first this year and Hall would be second). Here are all the players (except for Biggs and Percy as they were drafted this year) sorted by how many seasons had passed between their draft and rookie year:

So the first question is when did these guys make the NHL and how does Kadri compare? 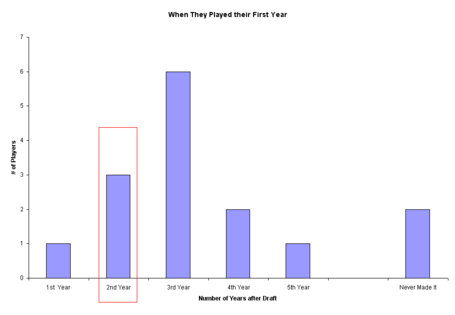 As you can see, Kadri (the red rectangle) had his rookie season pretty early, relative to the others. Burke usually waits longer before he brings these guys to the NHL. Similarly for age, only Ryan Kesler was younger than him in his rookie season.

The next question is how does he compare in his rookie season production? Here are the GPG and PPGs of rookie seasons for the forwards in this list who made the NHL (minus Colborne and his one game): 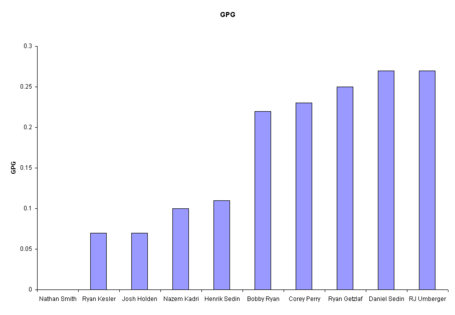 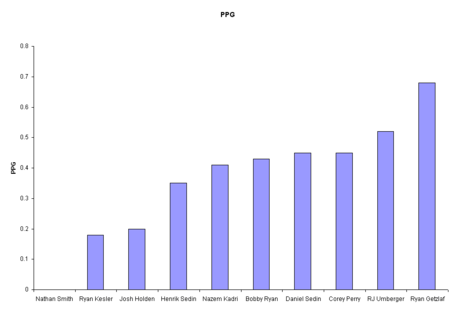 As you can see Kadri's goal scoring is a tad low and his point scoring is middle of the pack. Considering he is one of the younger guys in the list I am very happy with that.

Finally, the most important question, when did these guys break out?

As you can see most of these players didn't break out until 23-24 for either goal or point scoring in their 5th-7th season.

So where does that leave us? Well Kadri had his rookie season as early, or earlier, than all but one first rounder Burke has ever dealt with (Kesler). Even so, his rookie season compares fine to the other forwards, with middle of the pack point scoring and slightly low goal scoring. Most importantly, the average forward on this list broke out for goals at 23 (5.5 seasons after being drafted) and at 23.71 (6.14 season after being drafted) for points. Further except for Getzlaf's goal scoring breakout year, all breakout years happened at 21 or older and 4th season post draft or later. Kadri, at 21 and in his 3rd season post draft, is doing fine developmentally and probably will *not* reach his full offensive potential for another couple years. We definitely should *not* be calling him a bust AND we shouldn't be concerned if he doesn't yet produce that much this year.