The Monster Certainly Scares Me

Share All sharing options for: The Monster Certainly Scares Me

His save percentage this year is a sub-Toskalan 0.850 but I'm willing to admit that getting Boston and coming in for James Reimer in relief aren't the best five periods to judge someone on.

I'd like to talk once again about what being an NHL goaltender means. Here's a graph showing the 67 NHL goaltenders who played at least 10 games last year ranked by save percentage (click here for bigger): 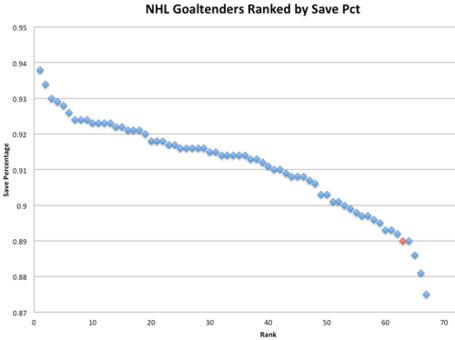 First off note the shape of the graph: it looks like a Long Tail save for the drop off at the end, but that's explainable: the graph drops off sharply at the end because goalies ranked that low aren't allowed to play in the NHL.

What does the Long Tail mean for us? It means that when people say things like "so and so is only .005 behind another goalie's save percentage" that it's meaningful: there are a lot of guys in that "tiny window", there are a lot of better options in that tiny window. It's easy to find guys who put up those kind of numbers because the supply is higher for them and the demand is lower.

Just because a number seems small to us doesn't mean that the difference between two options is meaningless. Take this awesome webpage from the NY Times where they play sounds based on when athletes finished a race at the Olympics. In Men's downhill skiing a second separates the gold medal from 15th place. In ice hockey .005 of a save percentage separates 20th best from 40th best.

By now I'm guessing most of you have figured out who that red dot on the graph is. Jonas Gustavsson was 67th best in the NHL last season. A lot of people (myself included) had hoped that his prolonged absence from the Leafs net, combined with his frankly stellar play in the AHL last season, meant that Francois Allaire had worked some of his patented magic on the Danderyd native.

There are too many .900 goalies out there to tolerate an .890 one, Gustavsson's time with the Leafs is almost certainly starting to run out.