Share All sharing options for: Recap: Leafs Vs. Rags 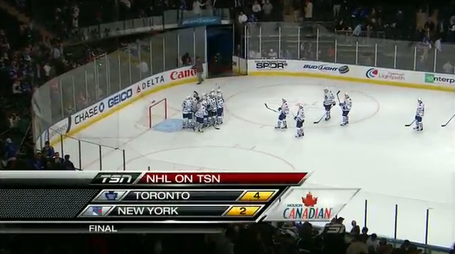 I think it would be safe to say that most Toronto Maple Leafs fans were expecting that, if the Leafs were going to win this one, it would be despite a serious imbalance in goaltending. They wouldn't be wrong, but they'd probably be surprised that Henrik Lundqvist turned in the more disappointing performance.

Sure, Jonas Gustavsson let in a softie to open the scoring, and the Rangers' second goal didn't look fantastic either (yes, it was tipped, but from a long ways out), but Gustavsson was good enough to out-duel King Henrik tonight, and we should all be thankful that the Leafs came away with an important two points.

If you just thought 'every two points holds equal value, JP', you wouldn't be entirely wrong, but technically, these points matter more, since in it puts the Leafs ahead in a season series between these two teams that could, eventually, mean the difference between eighth and ninth place.

I'm all for baby steps this year, and if our first baby step was not falling to pieces immediately after a four-game hot streak, then so be it. As I mentioned earlier this morning, the second will be to finish October with a playoff record. Given that the Ottawa Senators are one of our remaining opponents, it shouldn't be hard to pick up an extra point or two.

But let's get back to the game:

Mike Brown looked like Alexander Ovechkin as he absolutely sniped a goal through the legs of a Rangers defender. He broke up a Rangers breakout nicely on the play as well, intercepting a pass attempt in the neutral zone.

Carl Gunnarsson had a strong game, breaking up several scoring chances late in the game. Solid defensive coverage, and good positioning made up for a lack of speed when matched against a few of New York's speedier forwards.

Tim Connolly had a quiet night back, but I'll take that as a good sign. There were no serious defensive lapses, and although he didn't get an assist on the Lupul goal, he should get some credit, since he was the one creating all the havoc in front of Lundqvist. Going 6 for 16 on the draw isn't great, but he's not known as a faceoff guy, anyway.

Phil Kessel only had a point, but looked dangerous all night. He had two breakaways and several other good chances. Solid game from Phil. He could easily have had more than one assist on the night. Oh well, the point streak continues!

Who else stood out to you?